The striped dolphin (Stenella coeruleoalba) is an extensively studied dolphin found in temperate and tropical waters of all the world's oceans. It is a member of the oceanic dolphin family, Delphinidae.

A striped dolphin leaps in the Mediterranean Sea off Toulon

The striped dolphin has a similar size and shape to several other dolphins that inhabit the waters it does (see pantropical spotted dolphin, Atlantic spotted dolphin, Clymene dolphin). However, its colouring is very different and makes it relatively easy to notice at sea. The underside is blue, white, or pink. One or two black bands circle the eyes, and then run across the back, to the flipper. These bands widen to the width of the flipper which are the same size. Two further black stripes run from behind the ear — one is short and ends just above the flipper. The other is longer and thickens along the flanks until it curves down under the belly just prior to the tail stock. Above these stripes, the dolphin's flanks are coloured light blue or grey. All appendages are black, as well. At birth, individuals weigh about 10 kg (22 lb) and are up to a meter (3 feet) long. By adulthood, they have grown to 2.4 m (8 ft) (females) or 2.6 m (8.5 ft) (males) and weigh 150 kg (330 lb) (female) or 160 kg (352 lb) (male). Research suggested sexual maturity was reached at 12 years in Mediterranean females and in the Pacific at between seven and 9 years. Longevity is about 55–60 years. Gestation lasts about 12 months, with a three- or four-year gap between calving.

In common with other dolphins in its genus, the striped dolphin moves in large groups — usually up to thousands of individuals in number. Groups may be smaller in the Mediterranean and Atlantic. They may also mix with common dolphins. The striped dolphin is as capable as any dolphin at performing acrobatics — frequently breaching and jumping far above the surface of the water. Sometimes, it approaches boats in the Atlantic and Mediterranean, but this is dramatically less common in other areas, particularly in the Pacific, where it has been heavily exploited in the past. Striped dolphins are known as “streakers” throughout the eastern tropical Pacific due to their behavior of rapidly swimming away from vessels to avoid collisions

The striped dolphin feeds on small pelagic fish and squid. 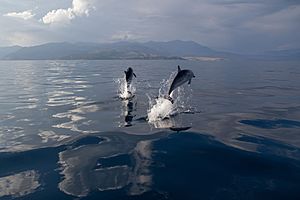 Striped dolphins jumping in the Gulf of Corinth

The striped dolphin inhabits temperate or tropical, off-shore waters. It is found in abundance in the North and South Atlantic Oceans, including the Mediterranean (sightings and strandings have been reported rather recently in Sea of Marmara) and Gulf of Mexico, the Indian Ocean, and the Pacific Ocean. Roughly speaking, it occupies a range running from 40°N to 30°S. It has been found in water temperatures ranging from 10 to 26 °C, though the standard range is 18-22 °C. In the western Pacific, where the species has been extensively studied, a distinctive migration pattern has been identified. This has not been the case in other areas. The dolphin appears to be common in all areas of its range, though that may not be continuous; areas of low population density do exist. The total population is in excess of two million. The southernmost record is of a stranded individual nearby Dunedin, southern New Zealand in 2017.

Japanese whalers have hunted striped dolphins in the western Pacific since at least the 1940s. Recent threats include military sonar, and chemical pollution from near by harbors.

Attempts have been made to keep the striped dolphin in captivity, but most have failed, with the exception of a few captured in Japan for the Taiji Whale Museum.

Striped dolphins are one of the targeted species in the Taiji dolphin drive hunt.

The adult striped dolphin eats fish, squid, octopus, krill, and other crustaceans. Mediterranean striped dolphins seem to prey primarily on cephalopods (50-100% of stomach contents), while northeastern Atlantic striped dolphins most often prey on fish, frequently cod. They mainly feed on cephalopods, crustaceans, and bony fishes. They feed anywhere within the water column where prey is concentrated, and they can dive to depths of 700 m to hunt deeper-dwelling species.

All content from Kiddle encyclopedia articles (including the article images and facts) can be freely used under Attribution-ShareAlike license, unless stated otherwise. Cite this article:
Striped dolphin Facts for Kids. Kiddle Encyclopedia.