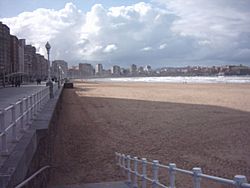 Gijón is a city in the autonomous community of Asturias in Spain. It is located on the Bay of Biscay, about 20 kilometres (12 mi) north of Oviedo. Gijón has a population of 275,274 inhabitants, more than any other city in Asturias.

For most of its history Gijón was just a small town and seaport. After the conquest of the Asturias in the 3rd century BC by the Romans they called the site Gigia. in 714 a garrison was established by the Moors. From here they attacked the Asturias but failed in the attempt. After the Moors left, Gijón was ruled by Asturian kings. In the 10th century the Asturias became part of the Kingdom of León. In the 16th century the harbor was improved under Philip II of Spain. Some of the ships of the Spanish Armada took shelter at Gijón's port in a violent storm. They were on their way to attack Britain in 1588. After the epic battle, a few of the remaining ships limped back to Gijón. During the last half of the 19th century a railroad was built to Gijón to ship Asturian coal to other parts of Spain. This was the start of Gijón becoming a large industrial center. During the Spanish Civil War part of Gijón was destroyed.

Gijón is famous for its beaches. In the summer newer parts of town resemble a carnival much like Coney Island. Every November the Gijón International Film Festival is held. The main stage is the Jovellanos Theatre, although other cinemas and cultural centres are also used.

All content from Kiddle encyclopedia articles (including the article images and facts) can be freely used under Attribution-ShareAlike license, unless stated otherwise. Cite this article:
Gijón Facts for Kids. Kiddle Encyclopedia.