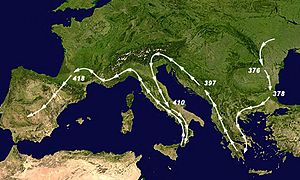 The Visigoths (Western Goths) were one of two main branches of the Goths, an East Germanic tribe (the Ostrogoths were the other). Both were among the loosely-defined Germanic tribes that fought the Roman Empire during the Migration Period.

Most famously, a Visigothic force, led by King Alaric I, succeeded in storming Rome in 410 AD. Later Visigothic kings ruled southern Gaul, and Hispania after they had taken it from the Alans and the Vandals.

After the collapse of the Western Roman Empire, the Visigoths played a major role in southwestern Europe for another 250 years and adopted Roman culture and clothing.

All content from Kiddle encyclopedia articles (including the article images and facts) can be freely used under Attribution-ShareAlike license, unless stated otherwise. Cite this article:
Visigoths Facts for Kids. Kiddle Encyclopedia.