Compton is a city in southern Los Angeles County, California, United States, situated south of downtown Los Angeles. Compton is one of the oldest cities in the county and on May 11, 1888, was the eighth city to incorporate. As of the 2010 United States Census, the city had a total population of 96,455. It is known as the "Hub City" due to its geographic centrality in Los Angeles County. Neighborhoods in Compton include Sunny Cove, Leland, Downtown Compton, and Richland Farms. The city is generally a working class city with some middle-class neighborhoods, and is home to a relatively young community, at an average 25 years of age, compared to the American median age of 35 (2010 data). 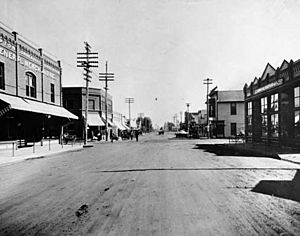 In 1784, the Spanish Crown deeded a tract of over 75,000 acres (300 km2) to Juan Jose Dominguez in this area. The tract was named Rancho San Pedro. Dominguez's name was later applied to the Dominguez Hills community south of Compton. The tree that marked the original northern boundary of the rancho still stands at the corner of Poppy and Short streets.

In 1867, Griffith Dickenson Compton led a group of 30 pioneers to the area. These families had traveled by wagon train south from Stockton, California in search of ways to earn a living other than in the rapid exhaustion of gold fields. Originally named Gibsonville, after one of the tract owners, it was later called Comptonville. However, to avoid confusion with the Comptonville located in Yuba County, the name was shortened to Compton. Compton's earliest settlers were faced with terrible hardships as they farmed the land in bleak weather to get by with just the barest subsistence. The weather continued to be harsh, rainy and cold, and fuel was difficult to find. To gather firewood it was necessary to travel to mountains close to Pasadena. The round trip took almost a week. Many in the Compton party wanted to relocate to a friendlier climate and settle down, but as there were two general stores within traveling distance—one in the pueblo of Los Angeles, the other in Wilmington—they eventually decided to stay put.

By 1887, the settlers realized it was time to make improvements to the local government. A series of town meetings were held to discuss incorporation of their little town. Griffith D. Compton donated his land to incorporate and create the city of Compton in 1889, but he did stipulate that a certain acreage be zoned solely for agriculture and named Richland Farms. In January 1888, a petition supporting the incorporation of Compton was forwarded to the Los Angeles County Board of Supervisors, who in turn forwarded the petition to the State Legislature. On May 11, 1888 the city of Compton was incorporated with a population of 500 people. The first City Council meeting was held on May 14, 1888.

The ample residential lots of Richland Farms gave residents enough space to raise a family, and food to feed them, along with building a barn, and caring for livestock. The farms attracted the black families who had begun migrating from the rural South in the 1950s, and there they found their 'home away from home' in this small community. Compton couldn't support large-scale agricultural business, but it did give the residents the opportunity to work the land for their families and for the welfare of the new community.

The 1920s saw the opening of the Compton Airport. Compton Junior College was founded and city officials moved to a new City Hall on Alameda Street. On March 10, 1933, a destructive earthquake caused many casualties: schools were destroyed and there was major damage to the central business district. While it would eventually be home to a large black population, in 1930 there was only one black resident. In the late 1940s, middle class blacks began moving into the area, mostly on the west side. Compton grew quickly in the 1950s. One reason for this was Compton was close to Watts, where there was an established black community. The eastern side of the city was predominately white until the 1970s. Despite being located in the middle of a major metropolitan area, thanks to the legacy of Griffith D. Compton, there still remains one small pocket of agriculture from its earliest years.

During the 1950s and 1960s, after the Supreme Court declared all racially exclusive housing covenants (title deeds) unconstitutional in the case Shelley v. Kraemer, the first black families moved to the area. Compton's growing black population was still largely ignored and neglected by the city's elected officials. Centennial High School was finally built to accommodate a burgeoning student population. At one time, the City Council even discussed dismantling the Compton Police Department in favor of the Los Angeles County Sheriff's Department in an attempt to exclude blacks from law enforcement jobs. A black man first ran for City Council in 1958, and the first black councilman was elected in 1961. 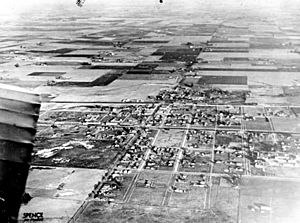 In 1969, Douglas Dollarhide became the mayor, the first black man elected mayor of any metropolitan city in California. Two blacks and one Mexican-American were also elected to the local school board. Four years later, in 1973, Doris A. Davis defeated Dollarhide's bid for re-election to become the first female black mayor of a metropolitan American city. By the early 1970s, the city had one of the largest concentrations of blacks in the country with over ninety percent. In 2013, Aja Brown, age 31, became the city's youngest mayor to date.

For many years, Compton was a much sought-after suburb for the black middle class of Los Angeles. This past affluence is reflected in the area's appearance—Compton's streets are lined with relatively spacious and attractive single family houses. However, several factors have contributed to Compton's gradual decline. One of the most significant factors was a steady erosion of its tax base, something that was already sparse due to limited commercial properties. In later years, there were middle-class whites who fled to the newly incorporated cities of Artesia, Bellflower, Cerritos, Paramount and Norwalk in the late 1950s. These nearby communities remained largely white early on despite integration. This white middle class flight accelerated following the 1965 Watts Riots and the 1992 Los Angeles riots.

By the late 1960s, middle-class and upper-middle-class blacks found other areas more attractive to them. Some were unincorporated areas of Los Angeles County such as Ladera Heights, View Park and Windsor Hills, and others were cities such as Inglewood and, particularly, Carson. Carson was significant because it had successfully thwarted attempts at annexation by neighboring Compton. The city opted instead for incorporation in 1968, which is notable because its black population was actually more affluent than its white population. As a newer city, it also offered more favorable tax rates and lower crime. 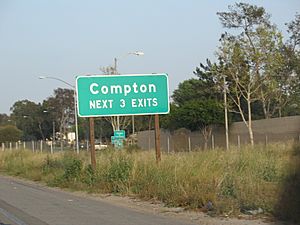 From 1999 to 2004, Compton's murder rate averaged at around 49 murders per 100,000 annually. In 2005 the city experienced an almost 45% increase in murders, although the annual numbers had dropped significantly in the prior three years. The Los Angeles Sheriff's Department began the annual "Gifts for Guns" program within that same year where the citizens of Compton were given the option to turn in firearms and receive a $50–$100 check for various goods in an effort to combat gun violence. People have turned in about 7,000 guns over the last few years, KABC-TV reported. The program's success has prompted the LASD to expand the program county-wide.

Although Compton was formerly thought of as a primarily black community, this has greatly changed over the years and now Latinos are the largest ethnic group in the city. A possible reason for this misconception is, despite the shift in population, that many black professional athletes and rappers are originally from Compton. Blacks continue to dominate local politics, holding most elected positions in the city. Although an inner suburb of Los Angeles, Compton has seen an increase of middle-class residents in the last few years, due to its affordable housing despite the portrayals of Compton in the media, which are typically exaggerated. With the influx of immigrants and the demographic shift in ethnic population, it was after the 2000 U.S. Census that Latinos were recognized as the majority.

Compton has a growing Pacific Islander, Filipino, and Vietnamese community. West Compton and unincorporated Willowbrook have more middle class blacks than the central city (west of Alameda St.) and unincorporated East Compton, the latter of which has a higher number of Hispanics and working-class blacks. Lower-income subsections on Compton Boulevard have many businesses owned by Latinos.

The city is known as the home of many famous rappers. Compton has evolved into a younger community; the median age of people living in Compton was 25 at the time of the last full census survey in 2010; the United States average at the time was 35.3.

Compton is home to the Compton Cricket Club, the only all American-born exhibition cricket team. Its founder, Ted Hayes, said, "The aim of playing cricket is to teach people how to respect themselves and respect authority so they stop killing each other."

Angeles Abbey Cemetery contains examples of Byzantine, Moorish and Spanish architectural styles. The cemetery was built in 1923 and survived the 1933 Long Beach earthquake.

Compton Airport opened on May 10, 1924. Located on Alondra Boulevard, the airport offers flight training, has accommodations for more than 200 planes, and is home to several aviation clubs.

The Eagle Tree is a natural boundary marker of Rancho San Pedro dating to 1858. It contains a historic marker and plaque placed by the Daughters of the Golden West in 1947.

The 'Heritage House' was built in 1869 and is a State Historic Landmark. The oldest house in Compton, it was restored as a tribute to early settlers. It is an important landmark of Compton's rich history. At the corner of Myrrh and Willowbrook near the Civic Center Plaza, the Heritage House is a rustic-looking home that will eventually have a museum detailing early life in Compton. For now it shows the stark difference between the simple life of the 19th century and the fast-paced urban environment of the 21st.

Woodlawn Cemetery is the final resting place of 18 Civil War veterans. It has been a Los Angeles County Historic Landmark since 1946.

On January 19, 2010, the Compton City Council passed a resolution creating a sister cities program to be managed as a chapter of the Compton Chamber of Commerce. The city has established partnerships with three cities:

The city is also looking to add sister partnerships with Yanga, Mexico and Port of Spain, Trinidad & Tobago.

All content from Kiddle encyclopedia articles (including the article images and facts) can be freely used under Attribution-ShareAlike license, unless stated otherwise. Cite this article:
Compton, California Facts for Kids. Kiddle Encyclopedia.