The Alameda Corridor is a 20-mile (32 km) freight rail "expressway" owned by the Alameda Corridor Transportation Authority (reporting mark ATAX) that connects the national rail system near downtown Los Angeles, California, to the ports of Los Angeles and Long Beach, running parallel to Alameda Street. The corridor is considered one of the region's largest transportation projects when it was constructed.

The project includes the Mid-Corridor Trench, a below-ground, triple-tracked rail line that is 10 miles (16 km) long, 33 feet (10 m) deep, and 50 feet (15 m) wide, shared by the BNSF Railway and Union Pacific Railroad (UP) via trackage rights. One important use of the corridor is to carry cargo containers to and from the ports. Fifteen percent of the nation’s container traffic travels through the corridor according to the Transit Authority. The corridor has a maximum speed of 40 miles per hour (64 km/h).

The Alameda Corridor allows trains to bypass 90 miles (140 km) of early 20th-century branch lines and the Atchison, Topeka & Santa Fe Railway's historic Harbor Subdivision along a high-speed grade-separated corridor, built mainly on the alignment of a former Southern Pacific Railroad (SP) line, avoiding more than 200 street-level railroad crossings where automobiles previously had to wait for lengthy freight trains to pass. Many of those same rail lines were inadequately protected with little more than “wigwag” crossing signals dating from the original construction of the lines. 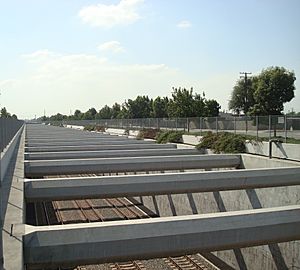 A section of the Alameda Corridor trench in the city of Compton. 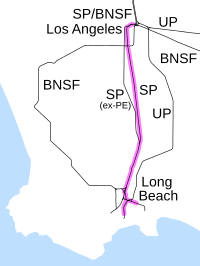 The Ports of Long Beach and Los Angeles completed the purchase of SP's Alameda Corridor line for $235 million in December 1994 ($338 million adjusted for inflation). The line began operation on April 15, 2002, and reached a peak of 60 train movements per day by October 2006. It is credited with significantly relieving congestion on the Long Beach Freeway (I-710) and elsewhere in the region. In 2007 the line carried 17,824 trains carrying 4.7 million TEUs (20-foot equivalent units) of containers.

In 2013, the railroad carried 33% of the freight traveling to and from the Ports of Los Angeles and Long Beach.

The Alameda Corridor was built in a way to permit electrification with the use of electric catenary wires, which would increase the environmental benefit by displacing the use of diesel fuel; but the electrification has not happened as of yet. This solution has largely been ignored due to lack of familiarity with electric freight technology in North America, although electric freight trains operate in many other parts of the world. Electrification could greatly reduce air pollution in the region, which has been described as a "Diesel Death Zone" due to the pollution from trucks on Interstate 710.

In December of 2020, the California Transportation Commission awarded funds of $8 million to expand the Alameda Corridor to include a fourth track. These funds came from the Road Repair and Accountability Act.

The Alameda Corridor–East project, currently under construction, will grade-separate many of the crossings along UP's Alhambra Subdivision and the Los Angeles Subdivision. Many crossings, which are currently at grade, tie up traffic on north–south streets for long periods multiple times a day as long freight trains pass en route to and from the UP yards in Vernon and Commerce. The project includes 19 grade separations and elimination of 23 grade crossings.

Included as part of the Alameda Corridor–East project is the $336.9 million San Gabriel Trench, which will submerge the track between Ramona street and San Gabriel Boulevard in San Gabriel. Construction began in 2012 and was completed in 2017.

Along with federal and state funding, the project is funded in part by the Los Angeles County Metropolitan Transportation Authority.

All content from Kiddle encyclopedia articles (including the article images and facts) can be freely used under Attribution-ShareAlike license, unless stated otherwise. Cite this article:
Alameda Corridor Facts for Kids. Kiddle Encyclopedia.