Carrey first gained recognition in America in 1990 after landing a recurring role in the sketch comedy television series In Living Color. His first leading roles in major productions came with Ace Ventura: Pet Detective (1994), Dumb and Dumber (1994), The Mask (1994), and Ace Ventura: When Nature Calls (1995), as well as a supporting role in Batman Forever (1995) and a lead role in Liar Liar (1997).

He gained critical acclaim starring in serious roles in The Truman Show (1998) and Man on the Moon (1999), with each garnering him a Golden Globe Award for Best Actor. 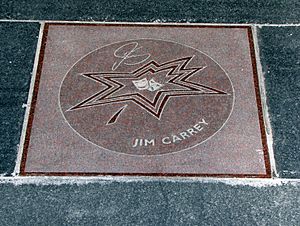 Carrey was born in Newmarket, Ontario, Canada, to Kathleen (née Oram), a homemaker, and Percy Carrey, a musician and accountant. He was raised a Roman Catholic and has three older siblings: John, Patricia, and Rita. His mother was of French, Irish, and Scottish descent and his father was of French-Canadian ancestry (the family's original surname was Carré).

At age 10, Carrey wrote a letter to Carol Burnett of the Carol Burnett Show pointing out that he was already a master of impressions and should be considered for a role on the show; he was overjoyed when he received a form letter reply.

Carrey lived in Burlington, Ontario, for eight years, and attended Aldershot High School. In a Hamilton Spectator interview (February 2007), Carrey said, "If my career in show business hadn't panned out I would probably be working today in Hamilton, Ontario, at the Dofasco steel mill." When looking across the Burlington Bay toward Hamilton, he could see the mills and thought, "Those were where the great jobs were." 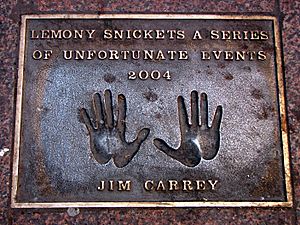 While Carrey was struggling to obtain work and make a name for himself, his father tried to help the young comedian put together a stage act, driving him to Toronto to debut at comedy club Yuk Yuk's. Carrey's impersonations bombed and this gave him doubts about his capabilities as a professional entertainer. His family's financial struggles made it difficult for them to support Carrey's ambitions.

Eventually, the family's financial problems were resolved and they moved into a new home. With more domestic stability, Carrey returned to the stage with a more polished act. In a short period of time, he went from open-mic nights to regular paid shows, building his reputation in the process. A reviewer in the Toronto Star raved that Carrey was "a genuine star coming to life".

Carrey was soon noticed by comedian Rodney Dangerfield, who signed the young comic to open his tour performances. Dangerfield eventually brought Carrey to Las Vegas. However, Carrey soon decided to move to Hollywood, where he began performing at The Comedy Store and, in 1982, appeared on the televised stand-up show An Evening at the Improv. The following year, he debuted his act on The Tonight Show.

1994 was a break-out year for Carrey. He was cast in the lead roles in Ace Ventura: Pet Detective, The Mask and Dumb and Dumber. Dumb and Dumber was a commercial success, grossing over $270 million worldwide, He received his first Golden Globe Award nomination for Best Actor for his work in The Mask.

All content from Kiddle encyclopedia articles (including the article images and facts) can be freely used under Attribution-ShareAlike license, unless stated otherwise. Cite this article:
Jim Carrey Facts for Kids. Kiddle Encyclopedia.