Rodney Dangerfield (Jacob Cohen, November 22, 1921 – October 5, 2004) was an American comedian, movie, television, stage, radio, voice actor, writer, and singer. He was known for his catchphrase "I don't get no respect!" He was in the movies Easy Money, Caddyshack, and Back To School. He won a Grammy Award.

Dangerfield was born on November 22, 1921 in Babylon, New York. He was married to Joyce Indig from 1949 until they divorced in 1961. They remarried in 1963 and divorced again in 1973. From 1993 until his death in 2004, he was married to Joan Child. He has two children with Indig. Dangerfield died on October 5, 2004 in Westwood, Los Angeles, California from complications from surgery, aged 82. 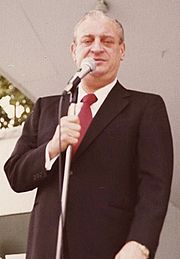 All content from Kiddle encyclopedia articles (including the article images and facts) can be freely used under Attribution-ShareAlike license, unless stated otherwise. Cite this article:
Rodney Dangerfield Facts for Kids. Kiddle Encyclopedia.