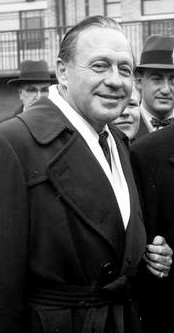 Jack Benny (born Benjamin Kubelsky; February 14, 1894 - December 26, 1974) was an American comedian and actor. He was born in Chicago and grew up in Waukegan, Illinois. His mother was a Lithuanian immigrant; his father was a Jewish immigrant from Poland. From 1932 to 1955, Benny had a radio show. The first title of the show was The Canada Dry Ginger Ale Program, but it was later called "The Jack Benny Program". His television program was broadcast from 1950 to 1965.

All content from Kiddle encyclopedia articles (including the article images and facts) can be freely used under Attribution-ShareAlike license, unless stated otherwise. Cite this article:
Jack Benny Facts for Kids. Kiddle Encyclopedia.