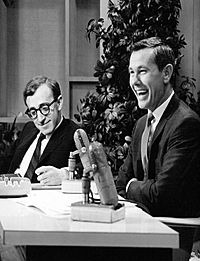 In 2002, The Tonight Show Starring Johnny Carson was ranked #12 on TV Guide's 50 Greatest TV Shows of All Time.

Carson played some skits during his show, the most popular were Carnac the Magnificent, Floyd R. Turbo, and Ronald Reagan (during his term in office, Carson would impersonate him).

In the show, Ed McMahon would be Caron's sidekick throughout the entire series and Doc Severinsen would lead the orchestra and would sometimes be Carson's sidekick.

All content from Kiddle encyclopedia articles (including the article images and facts) can be freely used under Attribution-ShareAlike license, unless stated otherwise. Cite this article:
The Tonight Show Starring Johnny Carson Facts for Kids. Kiddle Encyclopedia.