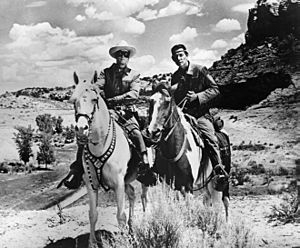 The Lone Ranger and his sidekick Tonto in 1956

A sidekick is someone who regularly travels with, and helps, another person. In fiction, the other person is often a crimefighter or superhero, such as Batman and his sidekick Robin. Some people consider Sancho Panza, Don Quixote's ever-faithful companion, to be a type of sidekick, even though the book was written long before the word sidekick was invented.

All content from Kiddle encyclopedia articles (including the article images and facts) can be freely used under Attribution-ShareAlike license, unless stated otherwise. Cite this article:
Sidekick Facts for Kids. Kiddle Encyclopedia.