Kids Encyclopedia Facts
This page is about a comic book superhero. For the city in Turkey, see Batman (city).

Batman is a fictional character created by Bob Kane and Bill Finger for DC Comics and the main protagonist in the DC Universe. He is DC's flagship character. Batman is the secret identity of the very rich businessman Bruce Wayne. He is one of the most famous and popular superheroes. Batman first appeared in comic books and was later used in several radio series, movies, TV programs, books, and video games. There are also many toys and other merchandise dealing with Batman and other characters and items from the world he lives in. Batman lives in the fictional city of Gotham. Batman has a trusty sidekick Robin whose identity has been taken up by various heroes, usually his wards. Batman has been one of the most popular and commercially successful superheroes. Often considered to be DC's flagship character and company mascot.

Batman was first named "Bat-Man" by Kane. Batman made its first appearance in 1939 in Detective Comics No. 27. He was the second DC superhero to be created. The first was Superman. Batman's origin story is that as a young child, Bruce Wayne saw a robber named Joe Chill murder his mother and father after the family left a theatre. Bruce decided that he did not want that kind of violence to happen to anyone else and wanted to avenge his parents death. He then dedicated his life to protect his city, Gotham City. Wayne learned many different ways to fight as he grew up. As an adult, Wayne used a costume to scare criminals so that there would be less crime in Gotham. He called himself Batman..... 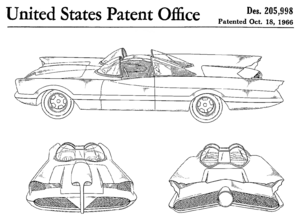 Batman uses many different tools to help fight crime, these may vary based on the different iterations of batman. Notable examples include his car which he calls "the Batmobile", a motorcycle called the "Bat-Pod", and has a special belt full of tools called a "utility belt" and most notably bat-shaped boomerangs called "Bat-A-Rangs." He also has radio signals in his bat ears and can shoot them out to his enemy. He also has tasers built in his suit, shocking his foes. In the movie "Batman & Robin" he has ice skates. He also has a kryptonite ring and a kryptonite launcher. He even has a power suit and a Bat-Saber(His version of a lightsaber).

Batman is often helped from other people in Gotham. Batman and his some of his various allies are often reffered to as the Bat Family. Some of these people also put on costumes and become superheroes when they help him. Some of the notable people who help him are his sidekick, Robin (Dick Grayson, Jason Todd, Tim Drake, and Damian Wayne), his butler Alfred Pennyworth, police commissioner James Gordon, Wayne Enterprises CEO and president Lucius Fox, and Gordon's daughter Barbara Gordon. Barbara Gordon became a superhero named Batgirl (and later used the name Oracle). Commissioner Gordon uses a Bat-Signal which shines a light into the sky with a shadow in the shape of a bat on when he needs Batman's assistance. Batman is often, but not always, shown being friends with Superman. He is often shown as a friend of wonder woman. Batman, superman, and wonder woman are often referred to as the "Trinity". Batman is a part of many superhero teams that fight against evil, most notably the Justice League or JL for short, and Justice League Dark or JLD.

Some of the villains that Batman fights, called his Rogues Gallery are the Joker, Penguin, Ra's al Ghul, Scarecrow, Talia al Ghul, Poison Ivy, Catwoman, Mr. Freeze, Bane, Riddler, Two-Face, and Clayface. Because of the way Batman deals with criminals, he may occasionally be seen as an enemy police. Once his tactics were stolen and used against some of the members of the justice league. 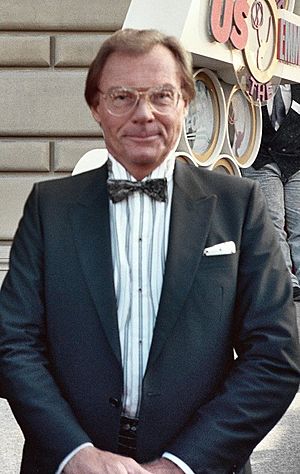 In the 1960s, a live-action television series was made of Batman and it was called Batman. In Batman, Adam West was the actor who was Batman and Burt Ward was the actor who was Robin. There are also many of cartoons with Batman as a character. These include, but are not limited to Superfriends, Batman: The Animated Series, Batman Beyond, and Justice League. There are other cartoons and programs where Batman is a character but he is not the most important part of the story, such as "Birds of Prey". This was a live-action series that is about Batman's daughter, the Huntress. The newest show is Beware the Batman.

All content from Kiddle encyclopedia articles (including the article images and facts) can be freely used under Attribution-ShareAlike license, unless stated otherwise. Cite this article:
Batman Facts for Kids. Kiddle Encyclopedia.