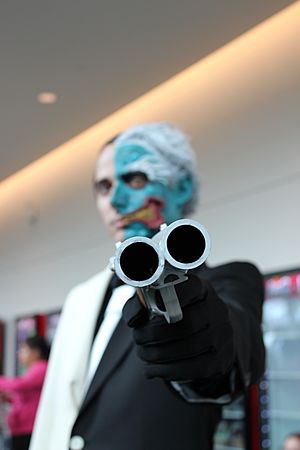 Two-Face or Harvey Dent is a fictional Batman supervillain who appears in comic books by DC Comics. The character was created by Bob Kane and Bill Finger and first appeared in Detective Comics #66 (August 1942). He was the district attorney of Gotham City before being burned in an explosion or being burned by acid. After his accident, he became a villain because of his anger against Batman and Gotham City. He always flips a coin when he is about to a commit a crime or take action. Half of his coin is burned. He had a girlfriend, but she either died or left him after his accident.

He was played by Billy Dee Williams in Batman, by Tommy Lee Jones in Batman Forever, and by Aaron Eckhart in The Dark Knight, and Nicholas D'Agosto in the television series Gotham. He was voiced by Richard Moll in Batman: The Animated Series.

All content from Kiddle encyclopedia articles (including the article images and facts) can be freely used under Attribution-ShareAlike license, unless stated otherwise. Cite this article:
Two-Face Facts for Kids. Kiddle Encyclopedia.