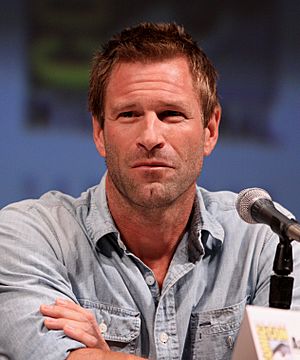 Eckhart became known world-wide in such films as in Erin Brockovich (2000), and gained a Golden Globe Award nomination for Best Actor for his role in Thank You for Smoking (2006). He is also known for his role as Two-Face in the 2008 summer blockbuster The Dark Kinght (2008). Eckhart alongside Nicole Kidman worked in a movie called Rabbit Hole (2010)

All content from Kiddle encyclopedia articles (including the article images and facts) can be freely used under Attribution-ShareAlike license, unless stated otherwise. Cite this article:
Aaron Eckhart Facts for Kids. Kiddle Encyclopedia.