Jennifer Joanna Aniston (born February 11, 1969) in Sherman Oaks, California is an American actress, film producer, and businessperson. She is the daughter of Greek-born actor John Aniston and American actress Nancy Dow. Aniston's godfather was actor Telly Savalas, one of her father's best friends. 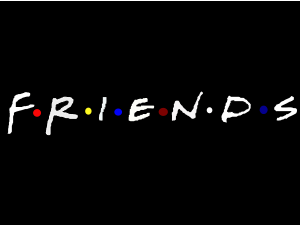 Logo for the TV series "Friends"

Aniston gained worldwide recognition for portraying Rachel Green on the television sitcom Friends (1994–2004), a role which earned her a Primetime Emmy Award, a Golden Globe Award, and a Screen Actors Guild Award. The character was widely popular during the airing of the series and was later recognized as one of the greatest female characters in American television. 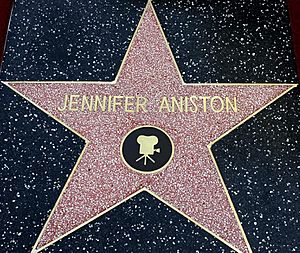 Aniston's star on the Hollywood Walk of Fame

In 2012, Aniston received a star on the Hollywood Walk of Fame. She is one of the highest-paid actresses in Hollywood, and as of 2017, her net worth is estimated to be US$200 million. She has also been included in magazines' lists of the world's most beautiful women. Aniston was the top-selling celebrity face of the entertainment industry. Aniston was Hollywood's most profitable actress and has been on the Forbes Celebrity 100 list, every year since 2001, topping the list in 2003.

As a child, Aniston moved to New York City. Despite her father's television career, Aniston was discouraged from watching TV. When she was six, she began attending a Waldorf school. Her father is best known for his role as Victor Kiriakis on the NBC daytime drama Days of Our Lives. Her mother appeared in two 1960s TV series, The Wild Wild West and The Beverly Hillbillies.

Having discovered acting at age 11 at the Waldorf school, Aniston enrolled in and graduated from Manhattan's Fiorello H. LaGuardia High School of Music & Art and Performing Arts, where she joined the school's drama society. 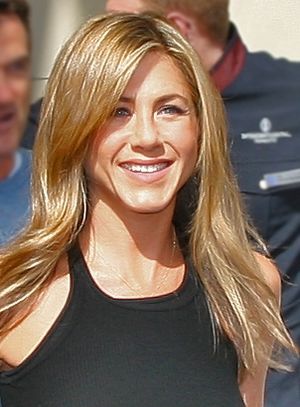 In 1995, Aniston and her Friends co-star Matthew Perry shot a 60-minute instructional video for the release of Microsoft's Windows 95 operating system. Along with Brad Pitt and Brad Grey, CEO of Paramount Pictures, Aniston founded the film production company Plan B Entertainment in 2002. In 2008, she and producer Kristin Hahn formed the production company Echo Films.

Under a contract with Elizabeth Arden, Inc., Aniston worked for over a year on a new perfume, which was released on July 21, 2010, at Harrods in London. In an interview following the launch, Aniston said that she would also like to create a fragrance for men, she has released six different perfumes over the years.

Since 2007, Aniston has worked in a publicity campaign for the drink SmartWater; on March 7, 2011, she released a YouTube video, titled "Jennifer Aniston Goes Viral", for SmartWater, which tripled online interest in the product within 24 hours of its release. Over the years she has been the face and spokesperson of many brands and businesses. 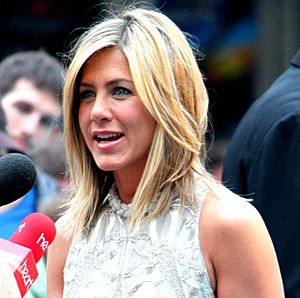 Aniston met Brad Pitt in 1998; their relationship became high-profile as it was widely publicized in the press. She married Pitt, after two years of dating, on July 29, 2000 in a lavish Malibu wedding. For a few years, their marriage was considered the rare Hollywood success. On January 7, 2005, they announced their separation and finalized their divorce on October 2, 2005.

Aniston began a relationship with actor, director, and screenwriter Justin Theroux in May 2011. The following January, they purchased a home in the Bel Air neighborhood of Los Angeles for roughly $22 million. They became engaged on August 10, 2012 and were married on August 5, 2015 at their estate. They separated at the end of 2017. 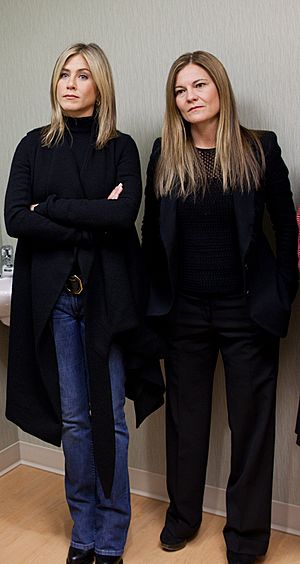 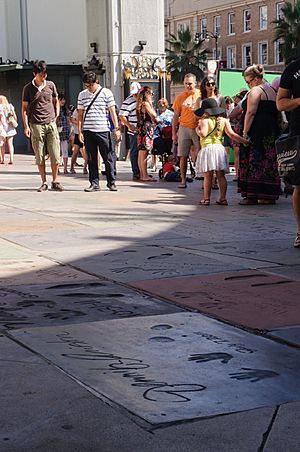 All content from Kiddle encyclopedia articles (including the article images and facts) can be freely used under Attribution-ShareAlike license, unless stated otherwise. Cite this article:
Jennifer Aniston Facts for Kids. Kiddle Encyclopedia.