Cupertino (/ˌkuːpərˈtiːnoʊ/ KOOP-er-TEEN-oh) is a U.S. city in Santa Clara County, California, directly west of San Jose on the western edge of the Santa Clara Valley with portions extending into the foothills of the Santa Cruz Mountains. The population was 58,302 as of the 2010 census. Forbes ranked it as one of the most educated small towns, with local public schools ranking highly in the country. It is known as the home of the Apple Inc. corporate headquarters.

Cupertino was named after Arroyo San José de Cupertino (now Stevens Creek). The creek had been named by Spanish explorer Juan Bautista de Anza's cartographer, who named it after Saint Joseph of Cupertino. Saint Joseph was born Giuseppe Maria Desa, and later known as Giuseppe da Copertino. Joseph of Cupertino was named after the town of Copertino in the Apulia region of Italy. The name Cupertino first became widely used when John T. Doyle, a San Francisco lawyer and historian, named his winery on McClellan Road "Cupertino". After the turn of the 20th century, Cupertino displaced the former name for the region, which was "West Side".

Although the meaning of "Copertino" is uncertain, it is likely a compound word meaning "little (covered) shelter." The -ino suffix in Italian words indicates "small" or "little", while "coprire" in Italian means "to cover", and "coperto" is derived from the Latin "coopertus," which means "covered shelter."

Cupertino in the 19th century was a small rural village at the crossroads of Stevens Creek Road and Saratoga-Mountain View Road (also known locally as Highway 9; later Saratoga-Sunnyvale Road, and then renamed to De Anza Boulevard within Cupertino city limits). Back then, it was known as the West Side and was part of Fremont Township. The primary economic activity was fruit agriculture. Almost all of the land within Cupertino's present-day boundaries was covered by prune, plum, apricot, and cherry orchards. A winery on Montebello Ridge overlooking the Cupertino valley region was also in operation by the late 19th century.

Soon railroads, electric railways, and dirt roads traversed the West Side farmlands. Monta Vista, Cupertino's first housing tract, was developed in the mid-20th century as a result of the electric railway's construction.

After World War II, a population and suburban housing boom dramatically shifted the demographics and economy of the Santa Clara Valley, as the "Valley of Heart's Delight" was beginning to transform into "Silicon Valley". In 1954, a rancher, Norman Nathanson, the Cupertino-Monta Vista Improvement Association, and the Fact Finding Committee, began a drive for incorporation. On September 27, 1955, voters approved the incorporation of the city of Cupertino (225 voted "yes" and 183 voted "no"). Cupertino officially became Santa Clara County's 13th city on October 10, 1955. The first city council consisted of Ralph Lindenmayer, Werner Wilson, John Saich, R. Ivan Meyerholz and Norman Nathanson. Lindenmayer was selected as the first mayor of Cupertino a week after the September 27 election. 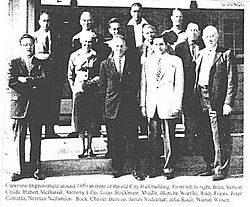 A major milestone in Cupertino's development was the creation by some of the city's largest landowners of VALLCO Business and Industrial Park in the early 1960s. Of the 25 property owners, 17 decided to pool their land to form VALLCO Park, 6 sold to Varian Associates (property later sold to Hewlett-Packard), and two opted for transplanting to farms elsewhere. The name VALLCO was derived from the names of the principal developers: Varian Associates and the Leonard, Lester, Craft, and Orlando families. A neighborhood outdoor shopping center and, much later, the enclosed Vallco Fashion Park, briefly renamed Cupertino Square, were also developed.

De Anza College opened in 1967. The college, named for Juan Bautista De Anza, occupies a 112-acre (0.45 km2) site that was the location of a winery built at the turn of the 20th century, called Beaulieu by its owners, Charles and Ella Baldwin. Their mansion has now become the California History Center. De Anza College now has about 22,000 students and is a hub of activity in the city. Its flea market, held the first Saturday of the month, attracts thousands from around the area.

Housing developments were rapidly constructed in the following years as developers created neighborhoods, including Fairgrove, Garden Gate, Monta Vista, Seven Springs, and other developments. The city is known for its high real estate prices.

On December 1, 2009, Cupertino became the first city in Northern California to have an Asian-American-majority city council.

Cupertino is the 11th wealthiest city with a population over 50,000 in the United States.

63 percent of Cupertino's population was of Asian ancestry in 2010, compared to 32 percent in Santa Clara Country overall. Money's Best Places to Live, America's best small towns, ranked Cupertino as #27 in 2012, the second highest in California. It was also named as the seventh "happiest" suburb in the United States, ranking highly in the categories of income, safety, marriage, and education.

Several streams run through Cupertino on their way to south San Francisco Bay, including (from north to south): Permanente Creek, Stevens Creek, San Tomas Aquino Creek and its Smith Creek, the Regnart Creek and Prospect Creek tributaries of Calabazas Creek, and Saratoga Creek.

Cupertino usually has mild weather, wet winters and mild, dry summers. However, due to the drought in California, the rainfall is lower than average.

Cupertino is made up of numerous subdivisions, most of them developed since the 1960s. Most of Cupertino's contemporary properties were developed between 1960 and 1961. The area between Stevens Creek boulevard, Miller avenue, Bollinger road, and Lawrence Expressway contains 224 Eichler homes. Two of the newest parts of Cupertino are among its oldest housing tracts. Monta Vista and Rancho Rinconada were developed outside of the city's boundaries in the 1950s and before. Rancho Rinconada was annexed in 1999 and the last part of Monta Vista was annexed in 2004. The neighborhood of Seven Springs is at the Southern tip of Cupertino and was developed in the very late 1980s. The newest and most northern neighborhood, Oak Valley, borders Rancho San Antonio Park and was developed around the turn of the millennium.

Cupertino is known for its expensive housing prices as the majority of residential properties are multimillion-dollar homes as of 2015, with the entry-point into a single family home at about 1.5 million dollars. Many homes are in the upper $1 million - $3.5 million range. The high cost of living in Cupertino is attributed to the high-quality schooling, safety of the town, and its central location within the Silicon Valley. The city has attracted many high-income professionals and executives many of which are all cash buyers. The price of housing in Cupertino seems to have weathered even the 2008 slump in economy. 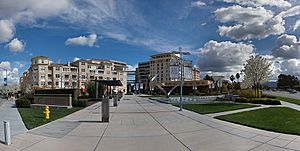 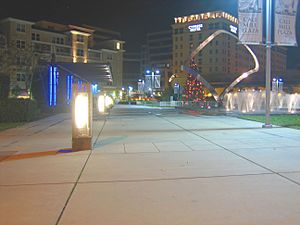 Cali Mill Plaza marks the traditional center of the city and the historical location of Crossroads. However, Cupertino does not have a traditional downtown shopping and commercial district.

The city is served by an interconnected road system. Two freeways, State Route 85 and Interstate 280, intersect in Cupertino, with multi-lane boulevards with landscaped medians and traffic lights at all major intersections. Streets nearly all have sidewalks, the few exceptions are in unincorporated pockets at the city's edges, which are maintained directly by Santa Clara County.

Cupertino has bike lanes on many of its boulevards. Bicycle traffic is heavy usually around morning and noon times around DeAnza College. The VTA has buses running through Cupertino at major arteries. Cupertino's main streets are well lit, while a few older roads towards the Monta Vista High School area are a little dim.

Dedicated on April 30, 2009, Cupertino opened the Mary Avenue Bicycle Footbridge, the first cable-stay bicycle pedestrian bridge over a California freeway. This bridge connects the north and the south sections of the Stevens Creek Trail. The cost of the bridge project was $14,800,000.

The Union Pacific Railroad operates a branch line track up to the Lehigh Permanente Cement Plant from the mainline at San Jose Diridon Station. It is however strictly for the quarry and very little to no non-quarry traffic runs there.

There is no commuter rail or light rail service in the city. Caltrain commuter rail runs through the cities to the north and east, and the Santa Clara Valley Transportation Authority (VTA)'s Mountain View – Winchester light rail line runs to Campbell, California to the south. Bus service is also provided by VTA, and the prospect of twenty-four-hour bus service on Stevens Creek Boulevard is being studied. Though this corridor (line 23) is one of VTA's most heavily used routes, there is no express service that takes commuters into San Jose, and the quality of service is therefore considered to be relatively poor. VTA recently added a limited bus service to De Anza College from Downtown San Jose via Steven Creeks Blvd (line 323)

Cupertino is landlocked and, like most Bay Area cities, relies on the Port of Oakland for most oceangoing freight.

Passenger and cargo air transportation is available at San Jose International Airport in San Jose. The closest general aviation airport is in Palo Alto; it is known as Palo Alto Airport of Santa Clara County.

Hollyhill Hummingbird Farm educates the community on growing fruit and vegetables, and raising chickens, in an organic and sustainable manner.

The De Anza College has a large enclosed theater called the Flint Center which is the primary venue for performing arts in the West Valley that is widely used as a music hall by orchestras, such as the California Youth Symphony and the San Francisco Symphony, as well as numerous professional performers and groups. The center was also home to the unveiling of several landmark Apple Computer products, such as the Macintosh computer and the iMac.

The Fujitsu Planetarium at De Anza College is the largest school Planetarium west of the Rocky Mountains and since its renovation, is one of the most modern in the world.

The Cupertino Historical Society has a museum at the Cupertino Community Center, located next to Memorial Park, which houses the Cupertino Veterans Memorial as well as an amphitheater that hosts events such as summer movies and Free Shakespeare in the Park.

There are a variety of popular restaurants in the area. Some of them are The Mandarin Gourmet, Noodles & Company, Fontana, Pizza My Heart, The Melt, and Paris Baguette Café is really popular as well. There are also several bubble tea shops such as Cafe Lattea, TPumps, and Quickly's. Bubble tea is extremely popular in Cupertino, and many students regularly buy it.

Cupertino is twinned with:

All content from Kiddle encyclopedia articles (including the article images and facts) can be freely used under Attribution-ShareAlike license, unless stated otherwise. Cite this article:
Cupertino, California Facts for Kids. Kiddle Encyclopedia.