Saratoga is a city in Santa Clara County, California, United States. It is located on the west side of the Santa Clara Valley, directly west of San Jose, in the San Francisco Bay Area. The population was 29,926 at the 2010 census. Located on the Western edge of the Silicon Valley, Saratoga is known locally for its suburban small-town feel, wineries, and high-end restaurants. Major attractions of Saratoga include Villa Montalvo, Hakone Gardens, and the Mountain Winery.

The 2016 Coldwell Banker Home Listing Report listed Saratoga as the most expensive housing market in the United States. In 2010 Bloomberg Businessweek named Saratoga the most expensive suburb in California.In 2008 CNN/Money ranked Saratoga number 4 in its listing of top-earning towns. Saratoga also was ranked by Forbes in 2009 as one of America's top 20 most-educated small towns. Bloomberg Businessweek also named Saratoga's zip code 95070 the 18th richest zip code in America in 2011.

This area was already discovered by the Natives Americans (citation needed). European settlers imposed a displacement and created a settlement of what is now Saratoga occurred in 1847, when William Campbell (father of Benjamin Campbell, the founder of nearby Campbell, California), constructed a sawmill about 2.5 miles (4.0 km) southeast of the present downtown area. An early map noted the area as Campbell's Gap. In 1851 Martin McCarthy, who had leased the mill, built a toll road down to the Santa Clara Valley, and founded what is now Saratoga as McCarthysville. The toll gate was located at the present day intersection of Big Basin Way and 3rd St., giving the town its first widely used name: Toll Gate. In 1867 the town received a post office under the name of McCarthysville.

Industry soon sprang up and at its pinnacle the town had a furniture factory, grist mill, tannery, and a paper factory. To commemorate this newfound productivity the town was renamed again in 1863 as Bank Mills. In the 1850s Jud Caldwell discovered springs which were called Pacific Congress Springs because the water had a mineral content similar to Congress Springs, in Saratoga Springs, New York. In 1865 the town received its final name, Saratoga, after the city in New York. At the same time a resort hotel called Congress Hall was constructed at the springs, named after the famous resort Congress Hall at Saratoga Springs, New York. California's Congress Hall attracted tourists to the area until it burned down in 1903. These events would eventually lead to Saratoga being listed as a California Historical Landmark in 1950. 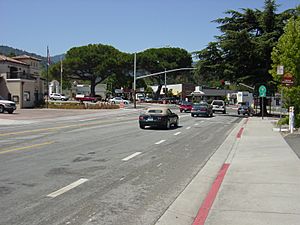 Downtown Saratoga, facing southwest at the intersection of Saratoga-Los Gatos Blvd. (to the southeast) and Saratoga Ave (the road on which this picture is taken from) and Big Basin Way/State Route 9 (ahead), and Saratoga-Sunnyvale road (to the north)

Saratoga became agricultural, as did much of the rest of the valley; a few vineyards and orchards from this period remain today. After World War II the town quickly became urbanized, and it incorporated in 1956 mostly to avoid being annexed to San Jose. A slogan during the campaign to incorporate the city of Saratoga was "Keep it rural," according to historian Willys I. Peck. Today the city serves as a bedroom community for upper-middle class Silicon Valley tech workers.

Neighborhoods in Saratoga include Brookview and Pride's Crossing in the north part of the city, Blue Hills and Greenbrier in the northwest area, and Congress Springs in the southwestern corner of Saratoga. The Golden Triangle, a name invented by real estate agents, is an area bounded by Saratoga Avenue, Saratoga-Sunnyvale Road and Cox Avenue. The Golden Triangle consists mostly of four-bedroom ranch homes (values ranging between 1 and 3 million dollars) on quarter acre lots gradually being replaced by Mediterranean custom designs. Northeast of the Golden Triangle is a neighborhood known as Saratoga Woods, a small community located behind Prospect High School north of Cox. Bellgrove Circle is a popular neighborhood located next to highway 85. The land of Bellgrove Circle, once used as a vineyard, was previously owned by Paul Masson Winery and is east of Saratoga Avenue and north of Rt 85. Kentfield is south of Rt 85 and also east of Saratoga Avenue. Parker Ranch is a very affluent neighborhood with 1-acre (4,000 m2) minimum lots, west of Saratoga-Sunnyvale Road and up into the hills. The downtown area along Big Basin Way is known as the Village.

Saratoga has several major roads including Saratoga-Sunnyvale Road, Saratoga-Los Gatos Road (Highway 9), Cox Avenue, Saratoga Avenue, Fruitvale Avenue, Pierce Road, Quito Road and Congress Springs Road. The West Valley Freeway (Highway 85) was completed in 1994 and passes through northeast Saratoga, and a railroad, now rarely in use, travels parallel to the highway. The railway, which from 1908 to 1964 delivered commuters to San Francisco in as little as 90 minutes, now only sees an occasional freight train. Highway 85 has one onramp/offramp within the city, at Saratoga Avenue; while the original plans for the freeway also included exits at Quito Road and Prospect Avenue, objections by residents kept those interchanges from being constructed. Street signs are brown in color.

Saratoga has no train or light rail service and only a minimal bus service.

The Blue Hills neighborhood of Saratoga has many hiking trails for use by residents that are owned by the City of Saratoga. 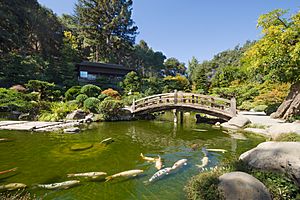 All content from Kiddle encyclopedia articles (including the article images and facts) can be freely used under Attribution-ShareAlike license, unless stated otherwise. Cite this article:
Saratoga, California Facts for Kids. Kiddle Encyclopedia.