Sanborn County Park is a 3,453 acres (13.97 km2) public park situated in the Santa Cruz Mountains owned by the county of Santa Clara, California, adjacent to Castle Rock State Park and the Los Altos Rod and Gun Club Range and Santa Clara County Peace Officers Association gun range. The park is managed by the Santa Clara County Parks and Recreation Department. The park is heavily forested and offers hiking and other generally low intensity outdoor uses. The park lies between the town of Saratoga and the ridgetop road, Skyline Boulevard. In the summer months, Sanborn County Park hosts the only outdoor Shakespearean company in Silicon Valley.

Sanborn County Park and the San Andreas Rift Valley are behind the ridge on the left in this view from the Mountain Winery parking lot a few miles north.

Exposed on the steep canyon eastern slopes of the Santa Cruz Mountains, Sanborn County Park has one of the coolest summer climates of Santa Clara County's parks. Towering redwood forests add to this eastern slope exposure in keeping hiking trails comfortable in the heavy use period, from June to September; moreover, there are abundant mixed forest locales having Coast live oak, Pacific madrone, Big leaf maple and Tanbark oak.

The park features the first segment of the regional Bay Area Ridge Trail in Santa Clara County, which extends along the ridge of the Santa Cruz Mountains to become the Skyline-to-the-Sea Trail, which continues to the Pacific Ocean. This Bay Area Ridge Trail ultimately circumnavigates the entire Bay Area at a length of 500 miles (800 km). The Sanborn and San Andreas trails ascend the eastern mountain slope, eventually joining the Cactus to Clouds Trail (AKA Skyline Trail) and Skyline Boulevard. Summit Rock, which is an established rock-climbing venue offers a panoramic outlook over Saratoga and the South Bay, lies at the upper limit of the park, but is readily reached from the Skyline Boulevard side.

At the southeastern corner of Sanborn County Park sits Lake Ranch Reservoir, an attractive tiny mountain lake, accessible via either a steep canyon trail at the terminus of Sanborn Road, or by way of a longer, more level trail originating at Black Road. The latter trail, which sinuates high up along the flanks of Lyndon Canyon, is a lightly used trail, but extremely lush and forested; it crosses numerous small riparian zones, whose creeks tumble into the steep-sided canyon, originally formed by the San Andreas Fault. Shorter, less strenuous trails extend through the redwood stands and along creeksides within the lower reaches of Sanborn County Park.

History of the park formation

Sanborn County Park was founded in the late 1970s in an expansionary era of the Santa Clara County Parks and Recreation Department under the leadership of Robert Amery and Charles Rockwell. A series of land acquisitions throughout the county, with the intention to develop a greatly expanded set of county parks emphasizing large land area and low intensity uses. The Sanborn County Park master plan was developed in this era. The county retained Earth Metrics Inc. to prepare an Environmental Impact Report (EIR) for the land use change, pursuant to requirements of the California Environmental Quality Act. Fairly soon thereafter the County Board of Supervisors approved the park plan and began development of necessary road and trail improvements. 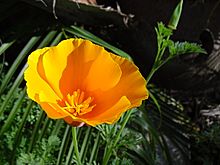 Besides the tree species noted above, the park contains a variety of native plants, first surveyed in the Earth Metrics EIR. Examples of this flora are: 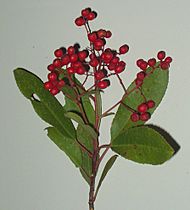 The park is open year-round, although there is no entry after sunset. Sanborn County Park is located on Sanborn Road. From the city of Saratoga, proceed two miles (3 km) west on Highway 9 to Sanborn Road, thence turning left onto Sanborn Road, traveling one mile (1.6 km) to the park entrance. Overnight camping is permitted and RV use is allowed for a limited number of vehicles at designated locations. Pets must be leashed and are permitted in picnic and RV areas, and most trails. There are entry fees collected at all times. There are strictly enforced rules prohibiting the picking of vegetation or damaging of trees. All facilities are not handicapped accessible, although there is an all-access trail emanating from the visitor center. Picnic tables and some grassy lawn areas are available in a very small portion of the park.

All content from Kiddle encyclopedia articles (including the article images and facts) can be freely used under Attribution-ShareAlike license, unless stated otherwise. Cite this article:
Sanborn County Park Facts for Kids. Kiddle Encyclopedia.