Eschscholzia californica, the California poppy, golden poppy, California sunlight or cup of gold, is a species of flowering plant in the family Papaveraceae, native to the United States and Mexico. It is cultivated as an ornamental plant flowering in summer, with showy cup-shaped flowers in brilliant shades of red, orange and yellow (occasionally pink). It is also used as food or a garnish. It became the official state flower of California in 1903. 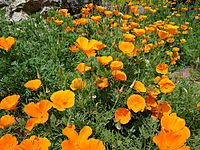 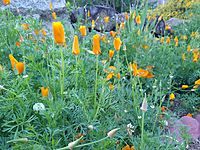 The same patch of California poppies, with petals open on a sunny day (above) and closed on a chilly evening (below).

It is a perennial or annual plant growing to 5–60 in (13–152 cm) tall with alternately branching glaucous blue-green foliage. The leaves are alternately divided into round, lobed segments. The flowers are solitary on long stems, silky-textured, with four petals, each petal 2 to 6 cm (0.79 to 2.36 in) long and broad; flower color ranges through yellow, orange and red (with some pinks). Flowering occurs from February to September in the northern hemisphere (spring, summer, fall). The petals close at night (or in cold, windy weather) and open again the following morning, although they may remain closed in cloudy weather. The fruit is a slender, dehiscent capsule 3 to 9 cm (1.2 to 3.5 in) long, which splits in two to release numerous small black or dark brown seeds. It survives mild winters in its native range, dying completely in colder climates. 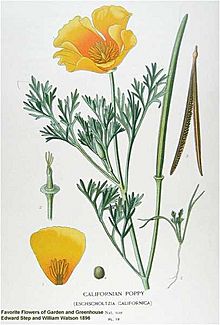 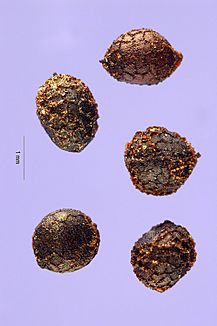 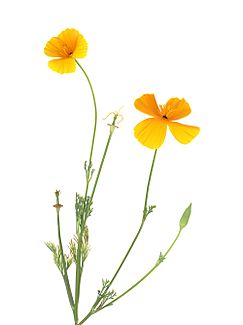 Scan of a California poppy 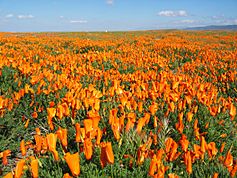 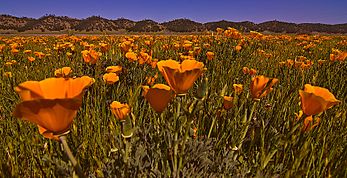 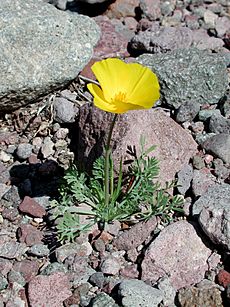 Eschscholzia californica was the first named species of the genus Eschscholzia, named by the German botanist Adelbert von Chamisso after the Baltic German botanist Johann Friedrich von Eschscholtz, his friend and colleague on Otto von Kotzebue’s scientific expedition to California and the greater Pacific circa 1810 aboard the Russian ship Rurik. 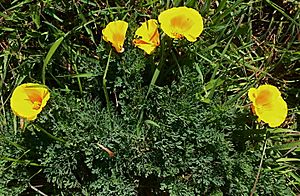 California poppy is highly variable, with over 90 synonyms. Some botanists accept two subspecies — one with four varieties (e.g., Leger and Rice, 2003) — though others do not recognize them as distinct (e.g., Jepson 1993):

A UK study of meadow flowers that focused on commercial mixes, but which also tested various common plants such as ragwort and dandelion, ranked the California poppy highly in pollen production, although it did not produce a significant amount of nectar. On a per-flower basis it ranked second, with a rate of 8.3±1.1μl. The corn poppy, Papaver rhoeas, topped the list for per-flower pollen production with its rate of 13.3 ± 2.8μl. When measuring the entire capitulum the top two species were the ox-eye daisy, Leucanthemum vulgare, with 15.9 ± 2μl, and Cosmos bipinnatus, which had a rate nearly equivalent to that of the corn poppy. As poppies are not wind-pollinated, their pollen poses no allergy risk via inhalation.

California poppy leaves are used as food or garnish, while the seeds are used in cooking.

E. californica is drought-tolerant, self-seeding, and easy to cultivate. It is best grown as an annual in full sun and sandy, well-drained soil or loam. Horticulturalists have produced numerous cultivars with a range of colors and blossom and stem forms. These typically do not breed true on reseeding. Seeds are often sold as mixtures. The following cultivars have gained the Royal Horticultural Society's Award of Garden Merit:- 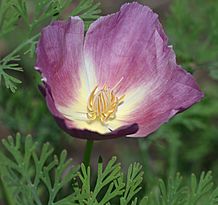 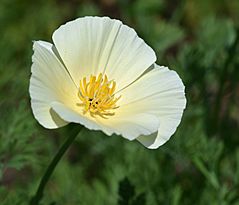 Because of its beauty and ease of growing, the California poppy was introduced into several regions with similar Mediterranean climates. It is commercially sold and widely naturalized in Australia, and was introduced to South Africa, Chile, and Argentina. It is recognized as a potentially invasive species within the United States, although no indications of ill effects have been reported for this plant where it has been introduced outside of California. The golden poppy has been displaced in large areas of its original habitat, such as Southern California, by more invasive exotic species, such as mustard or annual grasses.

In Chile, it was introduced from multiple sources between the mid-19th century and the early 20th century. It appears to have been both intentionally imported as an ornamental garden plant and accidentally introduced along with alfalfa seed grown in California. Since Chile and California have similar climatic regions and have experienced much agricultural exchange, it is perhaps not surprising that it was introduced to Chile. Once there, its perennial forms spread primarily in human-disturbed environments (Leger and Rice, 2003).

The introduced Chilean populations of California poppy appear to be larger and more fecund in their introduced range than in their native range (Leger and Rice, 2003). Introduced populations have been noted to be larger and more reproductively successful than native ones (Elton, 1958), and there has been much speculation as to why. An increase in resource availability, decreased competition, and release from enemy pressure have all been proposed as explanations.

One hypothesis is that the plant's resources devoted in the native range to a defense strategy can, in the absence of enemies, be devoted to increased growth and reproduction (the EICA Hypothesis, Blossey & Nötzold, 1995). However, this is not the case with introduced populations of E. californica in Chile: the Chilean populations were actually more resistant to Californian caterpillars than native populations (Leger and Forister, 2005). 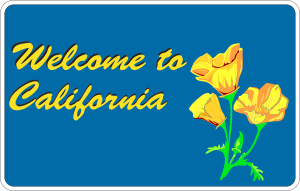 All content from Kiddle encyclopedia articles (including the article images and facts) can be freely used under Attribution-ShareAlike license, unless stated otherwise. Cite this article:
California poppy Facts for Kids. Kiddle Encyclopedia.