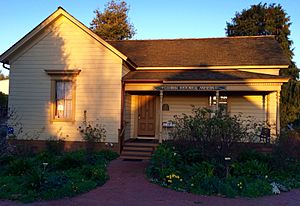 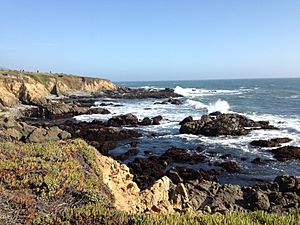 Bluffs and rocky shoreline at the Fiscalini Ranch Preserve in Cambria 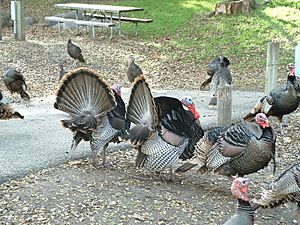 Wild turkeys are a common sight around Cambria

Cambria /ˈkeɪmbriə/ is a seaside village in San Luis Obispo County, California, United States midway between San Francisco and Los Angeles along California State Route 1 (Highway 1). The name Cambria, chosen in 1869, is the Latin name for Wales. Cambria is situated amidst Monterey pines in one of only three such native forests. Previously, the town had gone by the names of Slabtown, Rosaville, San Simeon and Santa Rosa. The corresponding census designated place (CDP) had a population of 6,032 at the 2010 census, slightly down from 6,232 at the 2000 census.

The earliest human settlement of this area is known to be associated with prehistoric habitation by the Native American Chumash peoples, who exploited marine resources along the coastal area, with emphasis upon sites that were close to rivers.

Although our recorded history of the tribes in this region does not begin until the explorers and missionaries arrived, there is evidence of many tribal settlements in the area later known as Cambria. It is estimated that as many as 30,000 people inhabited the area in the time (some 1000 years) before the Spanish arrived. Experts believe these tribes to have been migratory and used Cambria as a seasonal settlement; other scientists are convinced that they lived there permanently. Most agree that they fed themselves with shellfish and seafood, as well as obtaining food from travels inland to hunt and gather seeds. A variety of artistically-crafted implements have been discovered, including spears points and arrowheads made from obsidian; basalt, sandstone, and granite were used to make mortars and pestles; soapstone kettles and stone hammers were also found. These early inhabitants were skilled basket and net makers and fashioned jewelry from crab claws, abalone shells, and the teeth of sharks and whales. The presence of soapstone (steatite) provides evidence that they traded with the Catalina Island tribes, whereas the lack of metals and glass indicates that they did not trade with Europeans or Asians.

According to scientists there is ample evidence to conclude that Cambria tribes were gentle, generous, and peaceful people and that they lived simply. Their family bonds were strong, and they showed great love and patience toward their children. The members of the Cambria tribes were also noted for their extreme cleanliness in handling and preparing food and possessed a marked knowledge of medicinal herbs. For entertainment, they played music and had a passion for gambling.

The first recorded visit by Europeans took place in 1769 when the Portola expedition, coming overland from the south, visited the area. The Spanish explorers camped near the present site of the Coast Union High School, on Santa Rosa Creek, on September 10, 1769, and again on December 24-25, spending the first Christmas in what later became known as Cambria. The Spanish soldiers named the site El Osito, because the local Chumash people offered them a young pet bear (which they politely refused). Gifts of food (pinole and fish) were particularly welcome on their return journey, because food supplies were running short.

Cambria is located on the Rancho Santa Rosa Mexican land grant given in 1841 to Julian Estrada.

Settlers were drawn to the area because of the fertile lands, streams, and lumber. Additionally, miners were attracted to the area by the 1862 discovery of cinnabar, the ore from which quicksilver can be made. For a while, Cambria was a boom town, with $280,000 worth of quicksilver shipped out of San Simeon between 1867 and 1870.

During several years Cambria was a booming mine town, and prospectors flooded the area. More than 150 claims were filed in the early 1870s. The most successful of these claims, the Oceanic Quicksilver Mining Company, at one time employed 300 and was the largest mine in the area and the sixth largest in the world. Three furnaces were built, seven tunnels completed, and their stock price jumped to $30.00 a share. Hopes were high, and Cambria residents dreamed of imminent wealth. Unfortunately, by 1878, mercury prices started to fall and Cambria's first economic boom ended. As mercury prices fluctuated, Cambria's mining thrived and dwindled. During the boom of 1876, $282,832 worth of quicksilver was produced; four years later, production had decreased to only $6,760. A devastating fire in 1889 virtually ended the mercury business and Cambria settled into a quiet dairy community.

Originally an American settlement called Slab Town, the town later known as Cambria was centered at the Leffingwell cove of today's northern Moonstone Beach, which beach also featured a wharf. Because lumber production, ranching activities and mercury mining increased in the area, the village adopted the more dignified name of Cambria. The name as such was contributed by a local surveyor from Cambria County, Pennsylvania, because the local topography and flora reminded him of that place.

A castle and a shipwreck

Cambria has benefited greatly from the building of the Hearst Castle. During the high unemployment years of the Great Depression, many of the Cambria citizens found welcome employment in the building activities. Additionally, Cambria provided supplies, services, and accommodations for many who came to build the Castle, creating prosperity in Cambria in an otherwise not really prosperous decade.

War also affected Cambria when the 8,000-ton Union Oil tanker, SS Montebello, was attacked and sunk in the early morning of December 23, 1941. Cambria citizens rallied to the rescue and all six crewmen were rescued. According to the captain, Olaf Eckstrom, these citizens of Cambria were real heroes: "God Bless 'em — they performed like American seamen, orderly, efficient, without hysteria."

Other notable locations in the town include the historical Old Santa Rosa Chapel which was built in 1870, and as one of the oldest churches in the county of San Luis Obispo, held Catholic mass until May 26, 1963. The church fell into neglect until 1978, when the chapel and cemetery were restored. Wooden markers and tombstones as old as the founding year of the chapel (1870) grace the Santa Rosa Catholic Cemetery to the rear of the small chapel; at the entrance there is a large sign reading: In Pace Requiescat (Latin for Rest In Peace).

The Census reported that 6,031 people (100 % of the population) lived in households; only 1 (0 %) was known to live in non-institutionalized group quarters, and none were institutionalized. 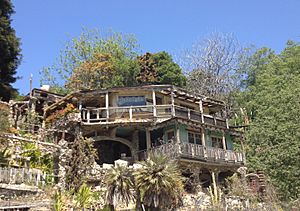 The primary economic activity of Cambria is tourism. Located on the Pacific Ocean, the area has rocky cliffs and beaches. The town and adjacent hills are known for the extensive Monterey pines that give the area a particular character. Tragically the 2012–14 drought devastated the forests with estimates that as many as 40% of the trees were dying.

There are many bed and breakfast inns and hotels, especially along Moonstone Beach Drive.The beach is home to various sea life such as seals and sea otters and tide pools filled with sea anemones, sea urchins, star fish, crabs, snails and more. The beach was named after the moonstones that wash ashore there. Moonstone Beach Boardwalk is a 1.5 mi (2.4 km) walk with several beach access points and benches to allow for sea life observation and beach combing.

Hearst Castle is located approximately six miles north, and the Northern elephant seal rookery at Piedras Blancas is some fifteen miles to the north.

Cambria is home to the Cambria Historical Museum in the historic East Village and to the California State Historical Landmark No 939, Nitt Witt Ridge. 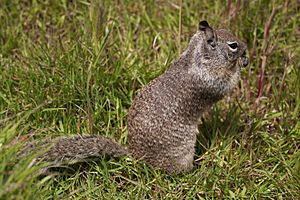 California ground squirrels are a common sight near Cambria's beaches

Cambria offers a variety of recreational activities such as bicycling and hiking. Local beaches offer a venue to boogie board, surf, and skimboard. Ocean fishing is conducted off area beaches. Local kayak fishing tours are available.

The Fiscalini Ranch Preserve (formerly known as the East-West Ranch) is a 430-acre park that separates Cambria's East and West Villages; it protects over a mile of spectacular Pacific Ocean coastline. The Fiscalinis were pioneering Italian Swiss dairymen, who moved into the Cambria region in the 1880s; they acquired a number of dairy farms, including what they called the Town Ranch. The Fiscalini family donated small plots of the Town Ranch as building sites for the Cambria public library, the Veterans Memorial and a museum. By the 1970s, the Fiscalini heirs, facing an inheritance tax of over one million dollars, sought a buyer, preferably a non-profit organization. None came forth, and in 1979 they sold the property to a developer, who went bankrupt in 1989 after failing to win approval of his ambitious development plans. The Fiscalini property was then sold for three million dollars to wealthy investors in the early 1990s. However, their development plans were also rejected, and in 2000 they sold the property to the American Land Conservancy. The park is managed by the Cambria Community Services District.

Cambria is built on the Cambria Slab, a 5,000 ft. thick late-Cretaceous sandstone in a rather enigmatic geologic setting, completely surrounded by Franciscan Formation rocks, mostly mélange. The Cambria Slab extends from Villa Creek in Estero Bluffs State Park to San Simeon Creek, holding up the high coastal ridge between Cayucos and San Simeon State Park. The sandstones are massively bedded. Bedding is only occasionally visible, as at the Leffingwell Landing bridge on Moonstone Beach. Compositionally, they are a feldspathic graywacke. The rocks in places are distorted and sheared (for example, below the high bluff at the north end of Moonstone Beach), and in a few areas injected by Franciscan mélanges and serpentinites (as on the beach below the high bluff at the north end of the Bluff Trail in the Fiscalini Ranch preserve). The Slab was deposited in an area of active subduction during the plate-tectonic assembly of today's coastal California.

The small town and high school were used for the filming of the 1990 hit, Arachnophobia. The filmmakers didn't use the town name however, and went with the name Canaima. The football players and staff shown on the field and in group events were actual CUHS students and staff, and the locker room, gymnasium, and surrounding buildings seen in the film are actual buildings of the high school.

The town became the basis for the hit radio drama "Milford-Haven U.S.A" that aired first locally in Cambria and San Luis Obispo, and also in Rochester, New York from 1987 to 1990. In 1992, it became a hit on BBC Radio, the first American radio serial broadcast in the U.K. where it reached an audience of 4.5 million listeners. In the 2000s it became a series of best-selling books called The Milford-Haven Novels.

Cambria is the setting for the romance novel Moonstone Beach by Linda Seed.

All content from Kiddle encyclopedia articles (including the article images and facts) can be freely used under Attribution-ShareAlike license, unless stated otherwise. Cite this article:
Cambria, California Facts for Kids. Kiddle Encyclopedia.