John Richardson, who originally described the species as Arctomys (Spermophilus) beecheyi, or the "Beechey's marmot", named it after Frederick William Beechey, an early 19th-century British explorer and naval officer. 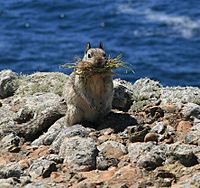 The squirrel's upper parts are mottled, the fur containing a mixture of gray, light brown and dusky hairs. The shoulders, neck and sides are a lighter gray. The fur around the eyes is whitish. The underside is lighter, buff or grayish yellow. Head and body are about 30 cm (12 in) long and the tail an additional 15 centimetres (5.9 in). They can weigh from 280 to 738 grams (9.9 to 26.0 oz). The tail is relatively bushy for a ground squirrel, and at a quick glance the squirrel might be mistaken for a fox squirrel.

As is typical for ground squirrels, California ground squirrels live in burrows which they excavate themselves. Some burrows are occupied communally but each individual squirrel has its own entrance. Although they readily become tame in areas used by humans, and quickly learn to take food left or offered by picnickers, they spend most of their time within 25 m (80 ft) of their burrow, and rarely go further than 50 m (160 ft) from it.

In the colder parts of their range, California ground squirrels hibernate for several months, but in areas where winters have no snow, most squirrels are active year-round. In those parts where the summers are hot they may also estivate for periods of a few days.

California ground squirrels are often regarded as a pest in gardens and parks, since they will eat ornamental plants and trees. They commonly feed on seeds, such as oats, but also eat insects such as crickets and grasshoppers as well as various fruits. The dental formula of Otospermophilus beecheyi is 1.0.2.31.0.1.3 × 2 = 22.

The coloration of the young is slightly lighter than the adults and molting occurs at about 8 weeks of age - when the young leave the burrows. California ground squirrels can live up to six years of age. 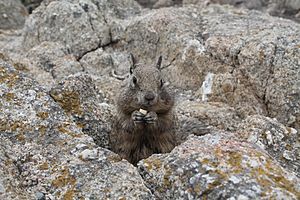 California ground squirrels use their cheek pouches to store more food than can be consumed in one sitting. They use their cheek pouches to store food to be consumed at a later date. California ground squirrels are considered to be mostly herbivores with seeds, grains, nuts, fruits, and sometimes roots constituting most of their diet.

California ground squirrels are frequently preyed on by rattlesnakes. They are also preyed on by eagles, raccoons, foxes, badgers, and weasels. Interdisciplinary research at the University of California, Davis, since the 1970s has shown that the squirrels use a variety of techniques to reduce rattlesnake predation. Some populations of California ground squirrels have varying levels of resistance to rattlesnake venom as adults. Female squirrels with pups also chew on the skins shed by rattlesnakes and then lick themselves and their pups (who are never resistant to venom before one month of age) to disguise their scent. Sand-kicking and other forms of harassment provoke the snake to rattle its tail, which allows a squirrel to assess the size and activity level (dependent on blood temperature) of the snake.

Another strategy is for a squirrel to super-heat and swish around its tail. When hunting, rattlesnakes primarily rely on their pit organ, which detects infrared radiation. The hot-tail-swishing appears to convey the message "I am not a threat, but I am too big and swift-moving for it to be worth trying to hunt me." These two confrontational techniques also distract the snake from any nearby squirrel burrows containing pups.

The swishing of the tail from side to side is called tail-waving. This tail-waving helps the squirrel to deter a snake attack. It was shown that the snakes attacked the squirrels that exhibited the tail-waving at a shorter distance than those that did not and majority of those tail-waving squirrels successfully dodged these attacks. This successful dodging, along with the fact that the adult squirrels are larger than the young ones, helps to deter the predators, as studies have found that the rattlesnakes are 1.6 times more likely to be deterred from attacking an area after an encounter with an adult squirrel. In 30 out of 45 interactions with snakes, the tail-waving behavior of the squirrels stopped the snake in its tracks and the snake attempted to wait for the squirrel to leave before it would consider attacking again, showing that the behavior does deter predatory attacks by the rattlesnakes. This is due to the adult squirrels being vigilant and looking more threatening and also that they are able to more successfully dodge attacks. They also can use their tail-waving to signal to other ground squirrels in the area that a rattlesnake or other predator has recently been spotted. Though the ground squirrels have been found to also exhibit this tail-waving behavior when there is no predator present, they wave their tail faster and for a longer amount of time when they spot a predator or in an area where a predator has recently been spotted.

Vigilant behavior in squirrels is also a defense mechanism to avoid predation. In addition to the tail-waving, the squirrels have been found to be more vigilant and on alert if there had recently been a predator in the area than they were if there had been no predator detected. If the ground squirrels are aware that they are in an area where the rattlesnakes have recently been, the ground squirrels devote more time to being alert and searching for the predators than to hunting and foraging than in an environment where they do not believe there are predators. These vigilant squirrels were found to have a faster reaction time to a stimuli from a predator and jump higher and further away than a squirrel who was not as vigilant. In a simulated environment study, 60% of squirrels that were in an environment with a recent snake encounter exhibited an evasive leap behavior, which propels them farther away from their attackers. 20% of squirrels exhibited this behavior in a primary encounter with a snake and roughly 5% of squirrels exhibited this behavior when there was no snake present and no threat detected. This shows that the squirrels are more alert, vigilant, and ready for an attacker after one has been recently seen.

All content from Kiddle encyclopedia articles (including the article images and facts) can be freely used under Attribution-ShareAlike license, unless stated otherwise. Cite this article:
California ground squirrel Facts for Kids. Kiddle Encyclopedia.