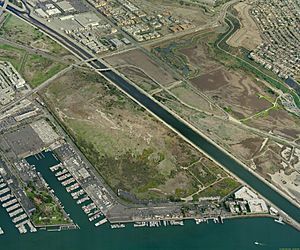 The Ballona Wetlands State Ecological Reserve is one of the last significant estuarine and freshwater wetland landscapes in coastal Los Angeles County and is named after the Mexican Rancho La Ballona, for which later Port Ballona and Ballona Creek derive their names. Lower Ballona Creek flows through the estuarine wetland between two earthen levees that flank the soft-bottom soil with a unique marine infauna, found only in this tidal river, and which is nearly fully covered with ocean water only at high tide, twice each day. Intermingled with the estuary and at the peripheral boundaries of the wetland landscape are habitats including coastal sand dunes with unique sand dune ecology, meadow grassland, coastal prairie, coastal willow woodland, coastal shrubland, salt pannes and pools, and coastal urban forests.

In the 1930s, upper Ballona Creek was completely channelized, from the bottom to top, in concrete, thus greatly increasing the inflow of ocean water further inland up the river, but simultaneously reducing ocean water to the marsh beyond the levee walls, as well as eliminating wet season rainwater runoff, which brought freshwater to the marsh plain.

In addition to functioning as a tidal river estuary, Ballona Creek also acts as a Flood control channel, and the construction of an estuarine harbor and port called Marina del Rey in the late 1950s, increased the 2,100-acre (8.5 km2) urbanized estuary by 700 acres (2.8 km2). Additional open space east of the wetlands was converted to agricultural uses by the early 20th century, with cultivation continuing into the 1990s, when these became some of the last farm fields in the Los Angeles Basin. In the 1940s, much of these farm fields became the private Hughes Airport. In the first decade of the 21st century that land was developed as Playa Vista, a planned mixed-use community east of Lincoln Boulevard.

The State of California owns and the California Department of Fish and Wildlife (CDFW) manages the wetlands. Approximately 577 acres (2.34 km2), are bisected generally east–west by the Ballona Creek channel, from Playa Del Rey to Culver City, and bordered by the 90 Marina freeway to the east. Eighty-three acres (340,000 m2) of estuarine wetland were included in the state acquisition, previously privately owned by Howard Hughes, his corporate heirs and the subsequent developers of Playa Vista.

These estuarine wetlands, and the remaining open space, have been the subject of a battle between developers and environmentalists that has been ongoing for decades. Numerous environmental lawsuits and the acquisition of a part of the Wetlands by the State of California has helped to protect a portion of this area, including nearly all the open space west of Lincoln Blvd. (including all of the remaining tidal wetlands). In 2002, remains of California Native American Tongva villages, artifacts, and buried ancestors were found during excavation on the Playa Vista site.

On January 28, 2013, the Annenberg Foundation signed a Memorandum of Understanding with the CDFW and the State Coastal Conservancy (SCC) to explore the possibility of creating an interpretive center and related public access amenities for the Ballona Wetlands Ecological Reserve (BWER). The Annenberg Foundation suspended its controversial plan to build a $50-million visitors center at the BWER in December 2014.

The Ballona Wetlands, is a habitat of a marine estuary alongside grassland, woodland, sand dune, and freshwater wetland ecosystems. Historically the outlet-mouth of the Los Angeles River switched, between San Pedro Bay and the Ballona creek watercourse to Santa Monica Bay, several times in the early 19th century only. It last came through Ballona in the early 19th century. The alluvium it left makes up the soils below. Some unique plants here are: the Ballona wallflower, southern tarplant, Lewis' primrose, and lupines.

The estuary, grassland, and sand dune is a periodic home for such wildlife as: great blue heron and snowy egret feeding sites and resting sites, with urban woodland trees alongside roadsides and buildings serving as nest rookeries and nocturnal roost sites in the non-nesting season, the California killifish, the California least tern, and the Belding's Savannah sparrow. The Ballona Wetlands and the adjacent city-owned lagoons are a stop along the migratory Pacific Flyway.

All content from Kiddle encyclopedia articles (including the article images and facts) can be freely used under Attribution-ShareAlike license, unless stated otherwise. Cite this article:
Ballona Wetlands Facts for Kids. Kiddle Encyclopedia.