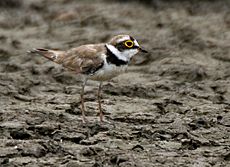 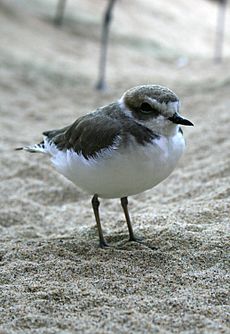 Snowy Plover, on the beach at Vanderberg, California

Plovers are water birds birds belonging to the subfamily Charadriinae. There are about 40 species, most of them called 'plover' or 'dotterel'. The closely related lapwing subfamily, Vanellinae, has another 20-odd species.

There are about 66 species in the subfamily, most of them called "plover" or "dotterel". The closely related lapwing subfamily, Vanellinae, comprises another 20-odd species.

Plovers are found throughout the world, with the exception of the Sahara and the polar regions, and are characterised by relatively short bills. They hunt by sight, rather than by feel as longer-billed waders like snipes do. They feed mainly on insects, worms or other invertebrates, depending on the habitat, which are obtained by a run-and-pause technique, rather than the steady probing of some other wader groups.

Plovers engage in false brooding, a type of distraction display. Examples include: pretending to change position or to sit on an imaginary nest site.

All content from Kiddle encyclopedia articles (including the article images and facts) can be freely used under Attribution-ShareAlike license, unless stated otherwise. Cite this article:
Plover Facts for Kids. Kiddle Encyclopedia.