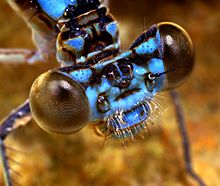 Head of a damselfly. Notice the eyes: they are widely separated.

Damselflies are insects in the order Odonata. Damselflies are similar to dragonflies, but in a separate suborder, the Zygoptera. There are 20 families of damselfly. 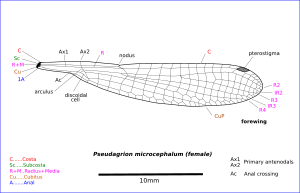 Illustration of damselfly wing. Both fore and hind wings are similar 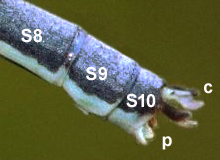 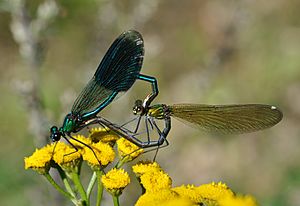 The wings of most damselflies are held along, and parallel to, the body when at rest. There are also damselfly families in which the wings are held open, as in the true dragonflies (Anisoptera).

Damselflies are also usually smaller, weaker fliers than dragonflies, and their eyes are well separated, by more than their own diameter. Another distinction is that their forewings and hindwings look similar; this is not the case in the true dragonflies.

Like dragonflies, damselflies have cannot walk, but only land. Their life cycle is also similar.

They have an exoskeleton and are often brilliantly coloured, but when they land on a bush, out of direct sunlight, they are not easy to see. They land and close their wings at the same instant.

They have eyes which detect movement well, and they fly off if anything moves nearby. Thus, although they are fragile and highly coloured, they are not easily caught by predators.

Damselflies (except spreadwings, Lestidae) rest their wings together, above their bodies, whereas dragonflies rest with their wings spread diametrically apart.

Damselflies have slenderer bodies than dragonflies, and their eyes do not overlap.

Odonates are found on all the continents except Antarctica. Although some species of dragonfly have wide distributions, damselflies tend to have smaller ranges.

Most odonates breed in fresh-water; a few damselflies in the family Caenagrionidae breed in brackish water (and a single dragonfly species breeds in seawater).

Although most damselflies live out their lives within a short distance of where they were hatched, some species, and some individuals within species, disperse more widely.

Adult damselflies catch and eat flies, mosquitoes, and other small insects. Often they hover among grasses and low vegetation, picking prey off stems and leaves with their spiny legs.

Although predominantly using vision to locate their prey, adults may also use smell to find their prey.

No species are known to hunt at night, but some are crepuscular, perhaps taking advantage of newly hatched flies and other aquatic insects at a time when larger dragonflies are roosting. In tropical South America, helicopter damselflies (Pseudostigmatidae) feed on spiders.

Damselflies exist in a range of habitats in and around the wetlands needed for their larval development; these include open spaces for finding mates, suitable perches, open aspect, roosting sites, suitable plant species for egg placing and suitable water quality. Different species have different requirements for their larvae with regard to water depth, water movement and pH.

Damselflies, both nymphs and adults, are eaten by a range of predators including birds, fish, frogs, dragonflies, other damselflies, water spiders, water beetles, backswimmers and giant water bugs. 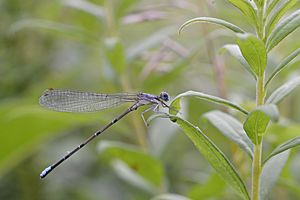 Many damselflies have elaborate courtship behaviours. These are designed to show off the male's distinctive characteristics, bright colouring or flying abilities, thus demonstrating his fitness. 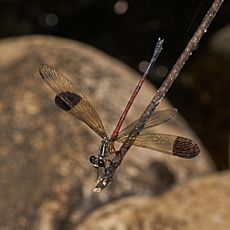 Other behaviours observed in damselflies include wing-warning, wing-clapping, flights of attrition and abdominal bobbing. Wing-warning is a rapid opening and closing of the wings and is aggressive, while wing-clapping involves a slower opening of the wings followed by a rapid closure, up to eight times in quick succession, and often follows flight; it may serve a thermo-regulatory function. Flights of attrition involve males bouncing around each other while flying laterally and continuing to do so, sometimes over a considerable distance, until one insect is presumably exhausted and gives up.

At night, damselflies usually roost in dense vegetation, perching with the abdomen alongside a stem. If disturbed they will move around to the other side of the stem but will not fly off. 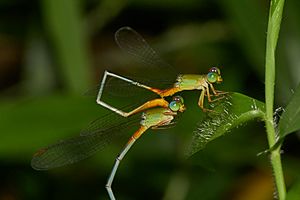 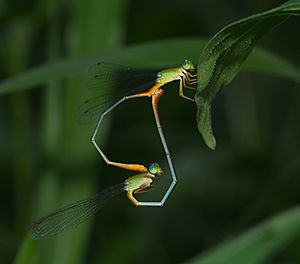 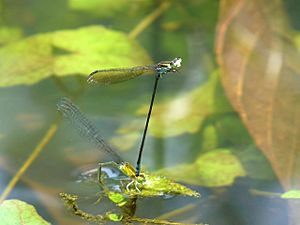 Yellow-striped blue dart, Pseudagrion indicum, laying eggs; the male (above) continues to hold the female with his claspers. 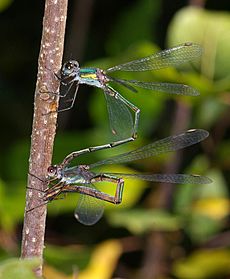 Pair of willow emeralds, Chalcolestes viridis, in tandem, laying eggs into a twig.

All damselflies are known to lay their eggs inside plant tissues; those that lay eggs underwater may submerge themselves for 30 minutes at a time, climbing along the stems of aquatic plants and laying eggs at intervals.

Many damselflies are able to produce more than one brood per year.

Damselflies are hemimetabolous insects that have no pupal stage in their development. The female inserts the eggs by means of her ovipositor into slits made in water plants or other underwater substrates and the larvae, known as naiads or nymphs, are almost all completely aquatic. The spreadwings lay eggs above the waterline late in the year and the eggs overwinter, often covered by snow. In spring they hatch out in the meltwater pools and the nymphs complete their development before these temporary pools dry up. 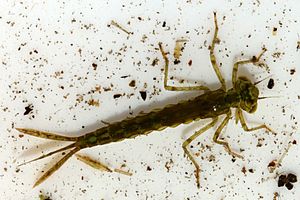 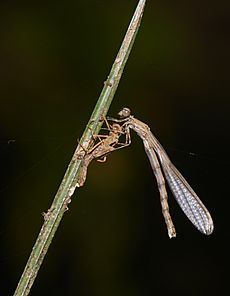 Prodasineura verticalis female emerging from the split skin of the nymph

The nymphs are voracious predators and feed on Daphnia (water fleas), mosquito larvae, and other small aquatic organisms. They breathe by means of three large external, fin-like gills on the tip of the abdomen, and these may also serve for locomotion in the same manner as a fish's tail.

The nymphs proceed through about a dozen moults as they grow. In the later stages, the wing pads become visible. When fully developed, the nymphs climb out of the water and take up a firm stance, the skin on the thorax splits and the adult form wriggles out.

This has a soft body at first and hangs or stands on its empty larval case. It pumps haemolymph into its small limp wings, which expand to their full extent. The haemolymph is then pumped back into the abdomen, which also expands fully. The exoskeleton hardens and the colours become more vivid over the course of the next few days.

Most damselflies emerge in daytime and in cool conditions the process takes several hours. On a hot day, the cuticle hardens rapidly and the adult can be flying away within half an hour. 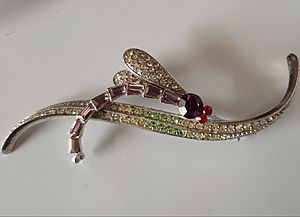 Damselfly is a 2005 short film directed by Ben O'Connor. Damselfly is also the title of a 2012 novel in the Faeble series by S. L. Naeole, and of a 1994 poem by August Kleinzahler, which contains the lines "And that blue there, cobalt / a moment, then iridescent, / fragile as a lady's pin / hovering above the nasturtium?" The poet John Engels published Damselfly, Trout, Heron in his 1983 collection Weather-Fear: New and Selected Poems.

Fishing flies that mimic damselfly nymphs are sometimes used in wet-fly fishing, where the hook and line are allowed to sink below the surface.

Damselflies have formed subjects for jewellery such as brooches since at least 1880.

All content from Kiddle encyclopedia articles (including the article images and facts) can be freely used under Attribution-ShareAlike license, unless stated otherwise. Cite this article:
Damselfly Facts for Kids. Kiddle Encyclopedia.