The Lestidae are a rather small family of cosmopolitan, large-sized, slender damselflies, known commonly as the spreadwings or spread-winged damselflies. 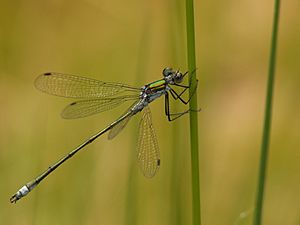 Breeding takes place in slow-moving or still water in stream backwaters, swamps, marshes and temporary pools. The nymphs have a long abdomen and a distinctive prementum (part of the lower lip). There is one generation per year in North American species.

All content from Kiddle encyclopedia articles (including the article images and facts) can be freely used under Attribution-ShareAlike license, unless stated otherwise. Cite this article:
Lestidae Facts for Kids. Kiddle Encyclopedia.