The black oystercatcher (Haematopus bachmani) is a conspicuous black bird found on the shoreline of western North America. It ranges from the Aleutian Islands of Alaska to the coast of the Baja California peninsula.

Although the species is not considered threatened, its global population size is estimated between 8,900–11,000 individuals. The black oystercatcher is a species of high conservation concern throughout its range (U.S., Canadian, Alaskan, and Northern & Southern Pacific Shorebird Conservation Plans), a keystone indicator species along the north Pacific shoreline, a management indicator species in the Chugach National Forest, and a U.S. Fish & Wildlife Service focal species for priority conservation action.

The black oystercatcher is a large entirely black shorebird, with a long (9 cm) bright red bill and pink legs. It has a bright yellow iris and a red eye-ring. Its plumage varies slightly from north to south, being darker further north.

The black oystercatcher is restricted in its range, never straying far from shores, in particular favoring rocky shorelines. It has been suggested that this bird is seen mostly on coastal stretches which have some quieter embayments, such as jetty protected areas. It forages in the intertidal zone, feeding on marine invertebrates, particularly molluscs such as mussels, limpets and chitons. It will also take crabs, isopods and barnacles. It hunts through the intertidal area, searching for food visually, often so close to the water's edge it has to fly up to avoid crashing surf. It uses its strong bill to dislodge food and pry shells open. 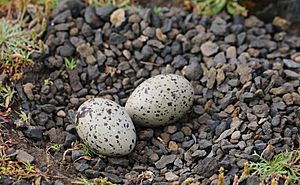 The black oystercatcher is a territorial bird during the nesting season, defending a foraging and nesting area in one territory. Some pairs have been recorded staying together for many years. Nests are small bowls or depressions close to the shore in which small pebbles and shell fragments are tossed in with a sideward or backward flick of the bill.

Around 2 to 3 eggs are laid in this nest, these are very hard and can even survive being submerged by a high tide or very high water levels. Incubation takes around 26–28 days. The chicks are capable of leaving the nest after one day, and will stay in the territory for a long time after fledging (40 days). The fledged juveniles will stay in the territory until the next breeding season. If the parents migrate, that year's chicks will migrate with them; this happens more often in the north of the range.

All content from Kiddle encyclopedia articles (including the article images and facts) can be freely used under Attribution-ShareAlike license, unless stated otherwise. Cite this article:
Black oystercatcher Facts for Kids. Kiddle Encyclopedia.