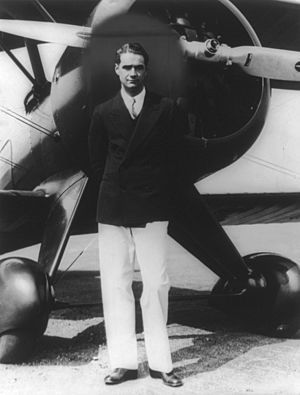 Howard Robard Hughes, Jr. (December 24, 1905 – April 5, 1976), was an American businessman and movie producer. During his life, he was one of the richest people in the world. He was born in Humble, Texas to a rich family. He went to Hollywood and became a movie producer and aviator. Hughes broke several world records for flying aeroplanes. He created his own air company, which was later bought by TWA.

Many people now think Hughes may have had OCD or obsessive compulsive disorder. This is because later in life, he kept himself away from the outside world. He lived in a hotel suite at The Desert Inn in Las Vegas as a recluse. He never left his room. He also did not cut his hair or fingernails. He had a group of doctors and other people to help take care of him. In 1972, a man named Clifford Irving claimed to have co-written the autobiography of Hughes. It was later shown to not be real. Hughes died in Houston while being moved to a hospital in Mexico. After he died, there was an argument over his will.

All content from Kiddle encyclopedia articles (including the article images and facts) can be freely used under Attribution-ShareAlike license, unless stated otherwise. Cite this article:
Howard Hughes Facts for Kids. Kiddle Encyclopedia.