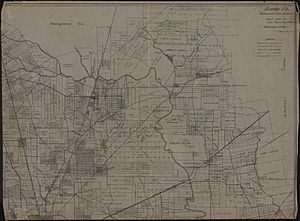 Harris County is a county located in the U.S. state of Texas. As of the 2010 census, the population was 4,092,459, making it the most populous county in Texas and the third-most populous county in the United States. Its county seat is Houston, the largest city in Texas and fourth-largest city in the United States. The county was founded in 1836 and organized in 1837. It is named for John Richardson Harris, an early settler of the area. By the July 2016 Census Bureau estimate Harris County's population had grown to 4,589,928. 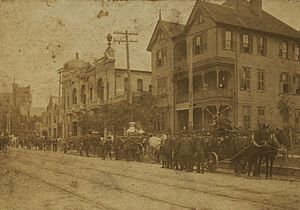 Firefighters on San Jacinto Street, circa 1914 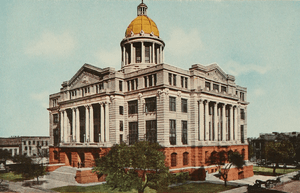 The Harris County Courthouse in Houston, in 1913.

At Ste. Genevieve Harris met Moses Austin and decided to move to Texas. He came to Texas in his own vessel in 1824 and received title to 4,428 acres of land at the junction of Bray's and Buffalo bayous in what is now Harris County. He boarded with William Scott while he built a house on the peninsula between the bayous and a store and warehouse on Buffalo Bayou.

In 1826 he employed Francis W. Johnson to lay out the town of Harrisburg. With his brother David Harris, John Harris established a second trading post at Bell's Landing on the Brazos River. Their sloops and schooners plied between Texas and New Orleans. One of these vessels, the Rights of Man, carried eighty-four bales of cotton to New Orleans in 1828.

Harris was building a steam sawmill-gristmill at Harrisburg in 1829, when he went to New Orleans to buy equipment and there contracted yellow fever. After his death on August 21, 1829, his sawmill and shipping enterprise were operated by his brothers David, Samuel, and William Plunkett Harris. His widow and son DeWitt moved to Texas in 1833; the other children came later.

Litigation over Harris's estate prevented Harrisburg from becoming the seat of the new Texas government in 1836, when Houston was named instead. 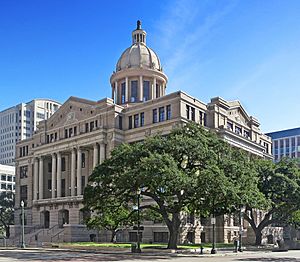 According to Children At Risk, a local non-profit research organization, 20.8% of the Harris County children live in poverty, 6.5 per 1,000 die before age 1, and 38% drop out of high school.

Harris County along with other Texas counties has one of the nation's highest property tax rates. In 2007, the county was ranked in the top 25 at 22nd in the nation for property taxes as percentage of the homes value on owner-occupied housing. The list only includes counties with a population over 65,000 for accuracy.

As of 2013 19% of blacks in Harris County have postgraduate degrees.

Steve H. Murdock, a demographer with the Rice University Hobby Center for the Study of Texas and a former director of the U.S. Census Bureau, predicted that by 2040, Hispanic residents of the county will increase by 2.5 million, while the number of non-Hispanic whites will decrease by 516,000. This assumes that the net migration rate is equal to one half of that of 1990–2000. As of 2013 13% of U.S.-born Latinos have postgraduate degrees, and 7% of Latino immigrants have postgraduate degrees. 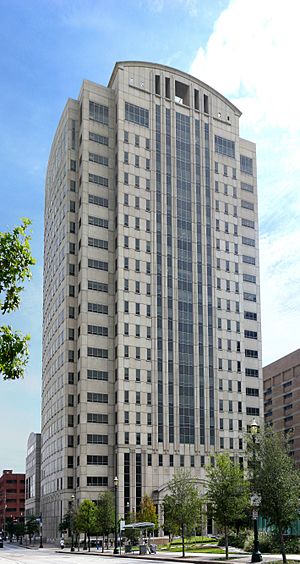 In 2013 Allen Turner of the Houston Chronicle said that residents of Harris County were "consistently conservative in elections" and that they were, according to a Rice University Kinder Institute for Urban Research opinion poll, "surprisingly liberal on topics such as immigration, gun control and equal matrimonial rights for same-sex couples". It's been widely regarded to be a moderate or swing county in Texas, and has been a bellwether in Presidential elections, voting for winners of every Presidential elections since 2000 (both Barack Obama and Texas resident George W. Bush have won the county).

As a result of the Obama sweep in 2008, many Democratic candidates in contests for lower-level offices also benefited, and many Republican incumbents were replaced by Democrats in the Harris County courthouse. Some of the defeated Republican district court judges were later re-appointed to vacant District Court benches by Governor Rick Perry. Republicans continue to hold all statewide offices after the 2014 elections, including all nine slots on each of the two high courts, but Harris County still has a mix of Democratic and Republican district court judges. All members of the two courts of appeals in the old Harris County Courthouse, by contrast, are Republicans. They are elected from an appellate district that includes Harris County, but also includes nine other counties that are more conservative and vote more Republican. Any generalizations about political leanings and voting patterns of the local electorate must take into consideration the geographic area/jurisdiction, and the same goes for public opinion polls. Whether elections for local offices coincide with presidential elections or mid-term elections also matters because turnout and composition of the voting segment of the electorate differ. The City of Houston, which overlaps with Harris County in part, but represents a smaller and more urban area and electorate, is even more liberal. That is why the City can elect a mayor who is not only a Democrat, but openly gay. (Mayoral elections are nominally non-partisan).

The opinion poll found that 46% of Harris County residents supported same-sex marriage, up from 37% in 2001, 83% favored offering illegal immigrants a path to citizenship, providing they speak English and have no criminal record, up from 19% in 2009, and 89% support background checks for all firearms.

In 2011, according to the nonprofit Children at Risk, one-third of students at public high schools in Harris County do not graduate. 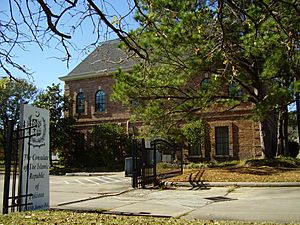 Various consulates are located in the county; one, the Consulate-General of Pakistan in Houston, which opened in June 2004, is at 11850 Jones Road in an unincorporated section of the county. The other consulates are in areas of Houston. 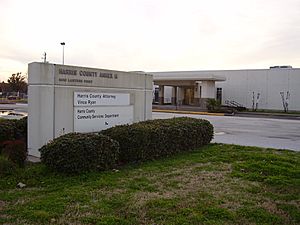 General aviation airports for fixed-wing aircraft outside of Houston include:

The chief administrative officer of a Texas County, as set up in the Texas Constitution, is the County Judge, who sits as the chair of the county's Commissioners' Court (the equivalent of a Board of Supervisors in some other states). Since 2007, this position in Harris County is held by Judge Ed Emmett. The county is split into 4 geographical divisions called Precincts. Each precinct elects a Commissioner to sit as a representative of their precinct on the commissioners court and also for the oversight of county functions in their area.

Other elected positions in Harris County include a County Attorney, a County Clerk, a District Attorney, a District Clerk, a Sheriff, 8 Constables, a Tax Assessor-Collector, a County Treasurer, and every judge in the county except municipal judges, who are appointed by the officials of their respective cities.

All content from Kiddle encyclopedia articles (including the article images and facts) can be freely used under Attribution-ShareAlike license, unless stated otherwise. Cite this article:
Harris County, Texas Facts for Kids. Kiddle Encyclopedia.