Spring is a census-designated place (CDP) within the extraterritorial jurisdiction of Houston in Harris County, Texas, United States, part of the Houston–The Woodlands–Sugar Land metropolitan area. The population was 54,298 at the 2010 census. While the name "Spring" is popularly applied to a large area of northern Harris County and a smaller area of southern Montgomery County, the original town of Spring, now known as Old Town Spring, is located at the intersection of Spring-Cypress and Hardy roads and encompasses a relatively small area of perhaps 1 square kilometer (0.39 sq mi).

The large geographic area now known as Spring was originally inhabited by the Orcoquiza Native Americans. In 1836, the Texas General Council of the Provisional Government placed what is now the town of Spring in the Harrisburg municipality. In 1838, William Pierpont placed a trading post on Spring Creek. In 1840, the town of Spring had 153 residents. By the mid-1840s, many German immigrants, including Gus Bayer and Carl Wunsche, moved to the area and began farming. People from Louisiana and other parts of the post-Civil War Southern U.S. settled in Spring. The main cash crops in Spring were sugar cane and cotton; area residents also grew vegetables.

In 1871, the International and Great Northern Railroad, built through Spring, opened, which caused Spring to expand. In 1873, Spring received a post office. By 1884, Spring had 150 residents, two steam saw and grist mills, two cotton gins, three churches, and several schools. In 1901–1903, the International-Great Northern Railroad opened, connecting Spring to Fort Worth. Spring, now with a roundhouse, became a switchyard with 200 rail workers and fourteen trackyards. The population increased to 1,200 by 1910. The Spring State Bank opened in 1912. In 1923, the roundhouse relocated to Houston, causing Spring to enter a decline; by 1931, Spring had 300 people. The bank was robbed several times in the 1930s; it was stated that Bonnie and Clyde robbed the bank once. The bank consolidated with Tomball Bank in 1935.

From 1969 to 1992, the Goodyear airship America was based in Spring from its large hangar visible just off Interstate 45. Takeoffs and landings were a major attraction and motorists continually pulled off to the interstate's shoulders to watch. In 1992 the America was moved to Akron, Ohio, and the massive hangar was eventually torn down. In 2016, the hangar's concrete foundation was still visible at the intersection of Holzwarth Road and Meadow Edge Lane west of Lowe's Home Improvement Center.

The 1992 Log Cabin Republicans convention was held in Spring.

The climate in this area is characterized by hot, humid summers and generally mild to cool winters. According to the Köppen Climate Classification system, Spring has a humid subtropical climate, abbreviated "Cfa" on climate maps. 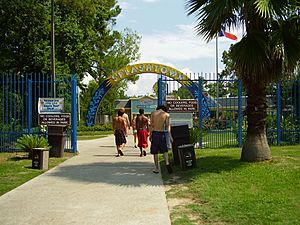 Harris County Precinct 4 operates parks in the Spring CDP. Southwell Park, a 5-acre (2.0 ha) facility located at 27419 Nelson Street, includes the B.F. Clark Community Building, a picnic pavilion with tables and a barbecue pit, one lighted basketball pavilion, barbecue grills, toilets, and two playgrounds with one for children aged 2 through 5 and one for children aged 5 through 12. Bayer Park, a 30-acre (12 ha) facility at 24811 West Hardy Road, includes four lighted softball fields, seven lighted baseball fields, and toilets. Pundt Park is a 380-acre (150 ha) park at 4129 Spring Creek Drive that is being developed as of 2008. The park will have a canoe launch, a pavilion facility with a meeting room and toilets, a playground facility, picnic areas, and a trail system connecting Bayer Park to the Spring Creek Greenway. Predinct 4 also operates the Mercer Arboretum and Botanic Gardens, south of and adjacent to the Spring CDP at 22306 Aldine Westfield Road. The facility includes the Baldwin Boettcher Branch Library, an endangered species garden with a beaver pond, a canoe launch, picnic areas, a playground for children aged 6 through 12, a tea house, a trail, and a visitor center.

The Cypresswood Golf club is located at 21602 Cypresswood Drive in the CDP. The club leases the land from Harris County and maintains the facilities.

A water park called SplashTown Houston is located in Spring. Old Town Spring is a popular shopping area in Spring.

The Cynthia Woods Mitchell Pavilion in The Woodlands is in proximity to Spring.

In January 2010 the Houston Business Journal reported that real estate officials said that ExxonMobil planned to build a corporate campus in unincorporated Harris County along Interstate 45, adjacent to the Spring CDP. According to the article, ExxonMobil plans to consolidate thousands of employees from Houston and Fairfax County, Virginia into the facility; employees from over two dozen locations in Greater Houston are expected to be consolidated into the new facility. The 9,000-employee campus opened in 2014. In 2022 ExxonMobil announced it was moving its headquarters there from Irving, Texas. 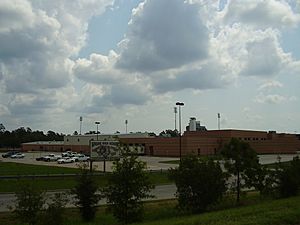 All areas within the Spring CDP are within the Spring Independent School District. Several elementary schools, George E. Anderson, Chet Burchett, Pearl M. Hirsch, Mildred I. Jenkins, Ginger McNabb, Northgate Crossing, Salyers, Lewis Eugene Smith, and John A. Winship, are within the CDP and serve sections of the CDP. Marshall Elementary School was scheduled to open in 2010.

Four middle schools, Bailey, Dueitt, Springwoods Village, and Twin Creeks, are within the CDP and serve sections of the CDP. All residents are zoned to Spring High School. Carl Wunsche Sr. High School is in the Spring CDP. In February 2017 the district proposed redrawing the attendance boundaries of its high schools; this would take effect in the 2020–2021 school year. According to the proposed 2020-2021 high school map, the eastern portion of the Spring CDP will be reassigned from Spring High School to Dekaney High School. Due to the impact of the COVID-19 pandemic in Texas the district delayed the high school boundary changes until at least 2022–2023.

Originally Spring was served by the Spring Common School District. In 1935 that district and the Harrell Common School District merged, forming the Spring Independent School District. The Southwell School, the segregated African-American school, served Spring from the early 1900s until 1945. In 1932 the Wunsche family donated land to the Spring school district, and the Carl Wunsche School, serving middle and high school, opened. In 1947 an addition opened and elementary school students began to be served by Wunsche. Salyers, opened in 1959 as Spring Elementary School, was the first dedicated elementary school of Spring ISD. As a result of Salyers opening, elementary school classes were removed from Wunsche School. Spring High School opened in 1969, taking high school students from Wunsche. As a result, Wunsche became SISD's first dedicated middle school.

Winship Elementary School's classes began in fall 1972; the Winship campus opened on December 15 of that year. Jenkins opened on February 6, 1977. Hirsch opened in 1978. Anderson opened in 1979. Dueitt opened in 1980. Wunsche closed as a regular middle school in 1983, and it was retrofitted to become a multi-purpose school. Twin Creeks, which took the middle school population of Wunsche, opened in 1984. Smith opened in 1986. Anderson was named a 1989-90 National Blue Ribbon School. Burchett opened in August 2005. Bailey opened in August 2006 and was dedicated on October 15 of that year. By the spring of 2015, Spring ISD planned to have built a new elementary school and High School #4 within the Spring CDP. Middle School #8 (Springwoods Village) is scheduled to open in fall 2020.

Langtry Preparatory Academy, a private school, is located in the Spring CDP.

In addition St. Thomas High School, an all boys' high school in central Houston, has a bus service from and to St. Edward Catholic School. In 2013 Saint John XXIII High School, in Greater Katy, also served the Spring area; Frassati opened in 2013 with the 9th grade and did not immediately serve all grade levels.

St. Edward's Catholic School is a fully accredited parochial school in the ArchDiocese of Galveston-Houston. Founded in 1972, the school's purpose has been to provide a quality Catholic education and to enable each child to reach his or her highest potential. St. Edward's campus is located at 2601 Spring Stuebner Road in Spring. The school is set on 15 wooded acres, approximately one mile west of Interstate 45. School grounds include three classroom buildings - one housing the Preschool classes, one for lower grade classes, and one housing the upper-grade classes. Facilities also include a gymnasium, computer lab, library, clinic, and athletic field.

Northwoods Catholic School, a private Catholic school in the Spring area, was located off of the intersection of Farm to Market Road 2920 and Gosling Road, in a 51-acre (21 ha) campus. It used a curriculum from the Legionaries of Christ. Established circa 1999, it was not affiliated with the archdiocese. It initially had 13 students, and was in a facility in the Ponderosa Forest neighborhood, an apartment clubhouse temporarily used as a school.

In the 2015–2016 school year, the school's final year of operation, it had 268 students; it was projected to have 160 students for the following school year. The school announced on May 4, 2016, that it was closing, and a shrinking budget and declining enrollment were cited as reasons. It closed on June 30, 2016. An area developer who was buying land from the school got into a legal dispute with the owner of the land and with a Catholic priest.

HCPL operates the Baldwin Boettcher Branch Library at Mercer Park at 22248 Aldine Westfield Road, south of the Spring CDP. The 10,137-square-foot (941.8 m2) branch opened in 1986. It was constructed on donated land. It was named after Baldwin Boettcher, a German settler. His descendants deeded the homestead to Harris County. The plans stated that the Boettcher staff would assist the Mercer Park staff in finding any botanical reference books that they or the public need.

The Barbara Bush Branch Library at Cypress Creek is located in at 6817 Cypresswood Drive in an area with a Spring address west of the Spring CDP. The 32,000-square-foot (3,000 m2) branch originally opened in June 1976. The Library was upgraded and expanded in 2002. Construction of the current library began in the northern hemisphere summer of 2000. The current branch was anticipated to house over 120,000 books and materials, making it twice as large as the previous branch. Jesse Sendejas of the Houston Chronicle said there was "a need to provide a more spacious and accommodating facility to Spring and its surrounding areas. That was apparent when county voters approved a $15 million bond for library improvements in November 1997."

All content from Kiddle encyclopedia articles (including the article images and facts) can be freely used under Attribution-ShareAlike license, unless stated otherwise. Cite this article:
Spring, Texas Facts for Kids. Kiddle Encyclopedia.