The Woodlands, Texas facts for kids 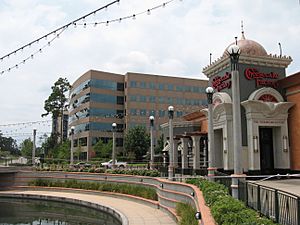 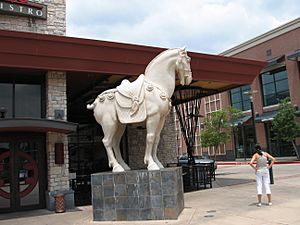 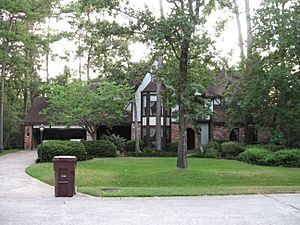 House in The Woodlands 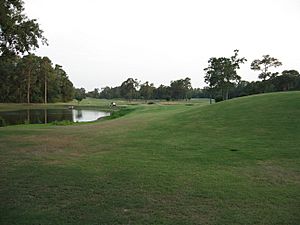 The Woodlands is a master-planned community and census-designated place (CDP) in the U.S. state of Texas in the Houston–The Woodlands–Sugar Land metropolitan area. According to The Woodlands Development Company, the population was 107,769 as of a January 2014 estimate[update], an increase of 93.7% over its population of 55,649 at the 2000 census.

It is 28 miles (45 km) north of Houston along Interstate 45. Though it began as a suburban development and a bedroom community, it has also attracted corporations and has several corporate campuses, most notably Chevron Phillips, Anadarko Petroleum Corporation, Huntsman Corporation, Woodforest National Bank, Baker Hughes, CB&I, McKesson Corporation, Aon plc, Maersk Line, Safmarine, GeoSouthern Energy, ExxonMobil, and SWN or Southwestern Energy Company. It won a Special Award for Excellence in 1994 from the Urban Land Institute.

The Woodlands was conceived after the oil industry investor George P. Mitchell attended a symposium by the Rouse Company subsidiary American City Corporation on how to develop HUD financed Title VII towns like Columbia, Maryland. It was dedicated by George P. Mitchell in 1974 and managed by The Woodlands Corporation as an extension of Mitchell Energy & Development. Mitchell, an oil businessman, planned to establish a conference center, hotels, office parks, retail malls, schools, large distribution centers, and golf courses. Houses would range from affordable to expensive and large. Bill Schadewald of the Houston Business Journal said that Mitchell wanted the development to "entice city slickers looking for far-flung suburban quality of life." Schadewald said that local sources stated that the HUD New Town program, a federally funded program, had a "low survival rate" and questioned whether The Woodlands would succeed.

The Woodlands Corporation was acquired on July 31, 1997, by a partnership between Morgan Stanley and Crescent Real Estate Equities. In December 2003, The Rouse Company acquired Crescent's interest, and Rouse was bought by General Growth Properties on November 12, 2004. In 2011 The Woodlands was sold to the Howard Hughes Development Corporation.

The land was previously occupied by the Grogan-Cochran Lumber Mill, hence Grogan's Mill and Cochran's Crossing neighborhoods, called "villages". The original planning utilized many of the planning concepts and design consultants employed in other well-regarded new communities of that era such as Columbia, Maryland, Irvine Ranch, California and Reston, Virginia. The original development plan included environmental design principles espoused by Ian McHarg, a distinguished landscape architect, teacher and author of the seminal work Design With Nature.

It continues to grow residentially and commercially as many companies are moving there. In addition to Chevron Phillips, Huntsman, Anadarko, Hewitt Associates, Lexicon Pharmaceuticals, Mærsk Sealand, Chicago Bridge & Iron, M&S Engineering and Woodforest National Bank have set up operations. The Town Center includes shopping and eating facilities, a waterway resembling the San Antonio River Walk, and water taxis known as "Waterway Cruisers" that are enclosed and cooled for added comfort.

On September 13, 2008, it sustained extensive damage from Hurricane Ike. Sustained winds of 85 mph (137 km/h) brought down thousands of trees, powerlines, and billboards in the area and severely damaged the Cynthia Woods Mitchell Pavilion. Ike was the first hurricane to directly affect the area since Hurricane Alicia in 1983.

The summer of 2011 brought an unprecedented drought throughout Texas, which caused thousands of trees to die and requiring they be taken down, a process that continued into 2012.

In 2011, Schadewald said "Now: Obviously, The Woodlands had quite a future. Somewhere between First Colony and The Woodlands, I realized why visionary real estate developers strike it rich more often than skeptical real estate reporters."

In 2012, the U.S. Census Bureau designated the area around The Woodlands and Conroe as a "large urbanized transit area," defined as having over 200,000 residents, making it eligible to receive federal transportation funds.

Mitchell's original plan was for The Woodlands to be annexed by the city of Houston. In the middle part of the 2000s (decade), some residents feared such an annexation, as had happened to the Kingwood development almost a decade before. To counteract any possible move by the city, a movement began to create an independent city government.

In 2007, two state legislators representing Woodlands, Sen. Tommy Williams and Rep. Robert Eissler, created and passed two bills in the 2007 Legislature – House Bill 4109 and Senate Bill 1012. HB 4109 called for a vote to allow expansion of an existing improvement district (now The Woodlands Township) and to allow The Woodlands to collect sales tax, while SB 1012 allowed for the creation of regional agreements between governments. The passage of these bills allowed an opportunity for The Woodlands to incorporate itself.

Map of the Woodlands CDP as of the 2000 census

It is in a heavily forested area, and much of the community has retained trees for shade and decoration. The terrain is essentially flat, with the exception of topographic variations ranging from 125 to 175 feet between Spring Creek and Flintridge Drive. 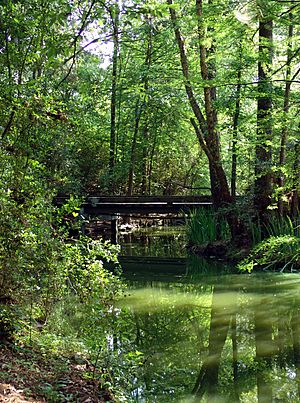 A bridge leading through the forest in The Woodlands, Texas.

There were 19,881 households out of which 47.1% had children under the age of 18 living with them, 69.2% were married couples living together, 7.2% had a female householder with no husband present, and 21.8% were non-families. 19.1% of all households were made up of individuals and 7.3% had someone living alone who was 65 years of age or older. The average household size was 2.78 and the average family size was 3.21.

By 2006 the numbers of middle and upper class Hispanics, including Mexican nationals, increased. Some of the residents were assigned to Houston by their companies. Some of them moved to The Woodlands to escape increased crime and political tensions from the Mexican presidential election. According to the 2010 U.S. Census 6.6% of the residents of The Woodlands were Hispanic. The 2013 Census estimates say the percentage is now 12.3%.

As of the 2013-2014 school year 22% of the students at Conroe Independent School District elementary and junior high schools in The Woodlands were Hispanic. This was an increase from 10.5% in the 2005-2006 school year, and the percentages grew particularly in Glen Loch, Lamar, and Tough elementary schools. The 2013-2014 percentage in Conroe ISD schools in The Woodlands is below the overall Conroe ISD Hispanic average of 34.2%.

The community has Viva! The Woodlands Magazine, a Spanish language magazine that covers The Woodlands, as well as the Montgomery County Hispanic Chamber of Commerce. Many churches in The Woodlands area have some services in Spanish. 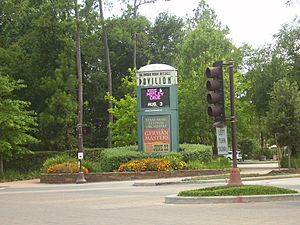 The Woodlands offers many entertainment venues including two movie theaters, over 150 restaurants, a publicly accessible waterway, dancing waterfalls with music, and the Cynthia Woods Mitchell Pavilion, summer home of the Houston Symphony and catering for many large acts (rock bands to classical). The Woodlands Waterway will eventually be more than 1/2 mile long, reaching from The Woodlands Mall around to Lake Woodlands and with wide, lighted sidewalks along both sides and Waterway Taxis. Other attractions include Market Street, an old style "Main Street" pedestrian shopping district, home to a movie theater and a variety of shops and restaurants. The Woodlands Mall borders the waterway and is adjacent to Market Street, forming a large pedestrian-friendly shopping district. Each of the "villages" in The Woodlands has its own shopping center with a core grocery store and shops, banks, gas, restaurants, etc. 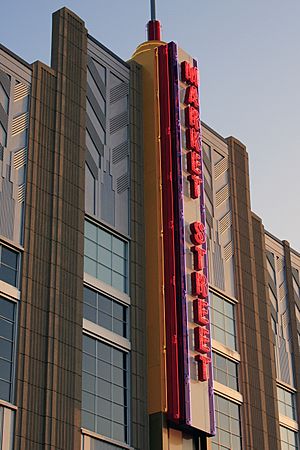 Market Street, a shopping center in The Woodlands.

The city is also home to a renowned community concert band officially known as "The Woodlands Concert Band". The band was established in 2001 and is currently the host of the Bayou City Community Band Festival. They perform annually at the Independence Day celebration at Market Street. Current membership of the band range from 75-85, made up of both amateur and professional musicians. Repertoire for the ensemble includes Classical, Patriotic, and Contemporary. On July 25, 2015, the Band gained acclaim by performing under the direction of world-renowned composer Frank Ticheli, at the 2015 Texas Band Masters Association Convention in San Antonio at the Henry B. Gonzalez Convention Center. The group is currently under the direction of Paul Worosello, as of 2009.

As of 2011, the community is majority Christian.

Over the course of 2007, producer Frank Eakin wrote and produced a film entitled The Bracelet of Bordeaux, which became the first film to be shot completely in The Woodlands. The cast and crew were largely composed of local residents, and the film itself was part of a larger effort on Eakin's part to generate interest in using The Woodlands and Houston as shooting locations for major motion pictures. Following its completion, the film was heavily promoted in the local press and at area businesses, leading to its world premier at The Woodlands High School. The film was generally not well received, and no further attempts have been made to bring the film industry to The Woodlands.

The Woodlands is organized into "villages", subdivided into "neighborhoods."

All content from Kiddle encyclopedia articles (including the article images and facts) can be freely used under Attribution-ShareAlike license, unless stated otherwise. Cite this article:
The Woodlands, Texas Facts for Kids. Kiddle Encyclopedia.