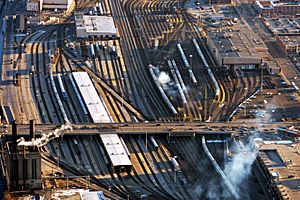 A large Amtrak and Metra coach yard in Chicago, IL. About 25 percent of all rail traffic in the United States travels through the Chicago area. 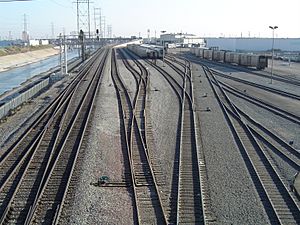 Yard for Amtrak equipment, located next to the Los Angeles River. The two tracks on the left are the mainline.

A rail yard, railway yard or railroad yard is a complex series of railroad tracks for storing, sorting, or loading and unloading, railroad cars and locomotives. Railroad yards have many tracks in parallel for keeping rolling stock stored off the mainline, so that they do not obstruct the flow of traffic. Railroad cars are moved around by specially designed yard switchers, a type of locomotive. Cars in a railroad yard may be sorted by numerous categories, including railroad company, loaded or unloaded, destination, car type, or whether they need repairs. Railroad yards are normally built where there is a need to store cars while they are not being loaded or unloaded, or are waiting to be assembled into trains. Large yards may have a tower to control operations.

Many railway yards are located at strategic points on a main line. Main-line yards are often composed of an up yard and a down yard, linked to the associated railroad direction. There are different types of yards, and different parts within a yard, depending on how they are built.

For freight cars, the overall yard layout is typically designed around a principal switching (US term) or shunting (UK) technique:

All content from Kiddle encyclopedia articles (including the article images and facts) can be freely used under Attribution-ShareAlike license, unless stated otherwise. Cite this article:
Rail yard Facts for Kids. Kiddle Encyclopedia.