Beckett recovered from a serious injury that caused him to miss most of the 2013 season and pitched a no hitter against the Philadelphia Phillies on May 25, 2014 for the Dodgers, becoming the 19th man to do so in Dodgers history. However, his season was again cut short due to an injury and he announced his retirement on October 7, 2014.

Beckett grew up idolizing fellow Texans Nolan Ryan and Roger Clemens. As a youth, he starred on Little League All-Star teams. He later attended Spring High School in Spring, Texas. As a high school junior, Beckett was ranked by Baseball America as the top high school prospect in the country and his team as the top high school baseball team. His high school coach said "I’ve never seen a pitcher with his ability—ever."

In his senior season, Beckett, by this point nicknamed "Kid Heat," was named the High School player of the year by USA Today. Beckett signed a letter of intent to pitch for Texas A&M University, but he and Josh Hamilton were seen as the top two players available in the 1999 Major League Baseball draft. Showing his confidence, Beckett predicted that he would make it to the major leagues within two years and play in an All-Star game by 2001. 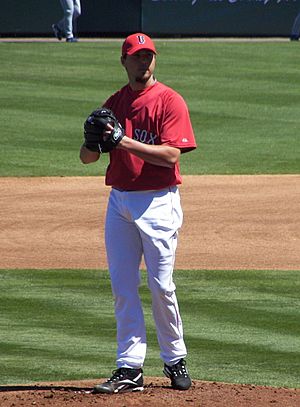 Beckett has been linked to such celebrities as model/sportcaster Leeann Tweeden and country singer Danielle Peck. On January 22, 2011, he married Holly Fisher, an aeronautics engineer and former high school classmate. Josh and Holly have three daughters, Ryann, Sage, and Madison

On October 18, 2007, Peck was invited by the Cleveland Indians to sing the National Anthem prior to Game 5 of the American League Championship Series between the Red Sox and Indians. Beckett was the starting pitcher in that game.

Beckett is an avid deer hunter and has been since childhood. He was the 2002 winner of the Muy Grande Deer Contest for bringing down the largest buck during the Texas deer hunting season. He owns Herradura Ranch, a 7,000 acres (28 km2) deer-hunting ranch outside of Cotulla, Texas.

He was featured in a Kevin Fowler music video alongside his teammates John Lackey, Tim Wakefield, Jon Lester and Clay Buchholz.

All content from Kiddle encyclopedia articles (including the article images and facts) can be freely used under Attribution-ShareAlike license, unless stated otherwise. Cite this article:
Josh Beckett Facts for Kids. Kiddle Encyclopedia.