Boerne ( BURN-ee) is a city in and the county seat of Kendall County, Texas, United States, within the Texas Hill Country. Boerne was named in honor of a Jewish-German author and publicist. The population of Boerne was 10,471 at the 2010 census. The city is noted for the landmark U.S. Supreme Court case City of Boerne v. Flores. Founded in 1849 as Tusculum, the name was changed to Boerne when the town was platted in 1852.

Boerne is the home of the Guadalupe Valley Poetry Celebration, a regional poetry festival that benefits the Boerne Public Library.

There are many historic structures in Boerne

Boerne came into being as an offshoot of the Texas Hill Country Free Thinker Latin Settlements, resulting from the Revolutions of 1848 in the German states. Those who came were Forty-Eighters, intellectual liberal abolitionists who enjoyed conversing in Latin and who believed in utopian ideals that guaranteed basic human rights to all. They reveled in passionate conversations about science, philosophy, literature, and music The Free Thinkers first settled Castell, Bettina, Leningen, and Schoenburg in Llano County. These experimental communities were supported by the Adelsverein for one year. The communities eventually failed due to lack of finances after the Adelsverein funding expired, and conflict of structure and authorities. Many of the pioneers from these communities moved to Sisterdale, Boerne and Comfort.

In 1849, a group of Free Thinker German colonists from Bettina camped on the north side of Cibolo Creek, about a mile west of the site of present Boerne. They named their new community after Cicero's Tusculum home in ancient Rome. In 1852, John James and Gustav Theissen, who helped settle Sisterdale, platted the townsite, renamed it in honor of German author Karl Ludwig Börne, with the Anglicized spelling of Boerne. The town was not incorporated until 1909. August Staffell was the original postmaster in 1856.

In March 1887, the San Antonio and Aransas Pass Railway came to town. The coming of the railroad was an economic boost of some magnitude, and it created better conditions for the area.

In the late 1870s, retired British army officers, including Glynn Turquand and Captain Egremont Shearburn, played one of the first polo matches in the United States in Boerne. The polo ground is still visible on Balcones Ranch, bought by Captain Turquand in 1878.

For more details, see List of Darmstadt Society of Forty

Some of the early settlers in Boerne migrated from the collapsed Fisher-Miller Land Grant experimental colonies of the Darmstadt Society of Forty.

The town is 30 miles (48 km) northwest of Downtown San Antonio.

Two of Texas' seven show caves are located in Boerne: Cave Without a Name and Cascade Caverns. They are both actively growing limestone solution caves. 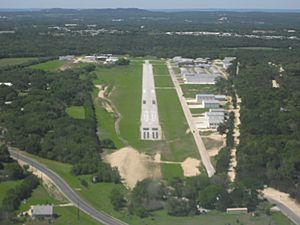 There were 2,292 households out of which 36.0% had children under the age of 18 living with them, 57.0% were married couples living together, 10.8% had a female householder with no husband present, and 29.6% were non-families. 25.7% of all households were made up of individuals and 13.4% had someone living alone who was 65 years of age or older. The average household size was 2.56 and the average family size was 3.10.

The Marsh Loop Trail Boardwalk at the Cibolo Nature Center.

Created in the early 2010s, the Hill Country Mile is a 1.1 mile long walking path following River Road Park and historic Main Street. The path was created as a catalyst to unify and preserve the rich cultural identity of downtown Boerne. It was also created to increase and foster economic growth through downtown shopping and culture centers.

Cibolo Nature Center (CNC) comprises over 100 acres of Hill Country trails and wilderness. The center was first opened to the public on Earth Day in 1990 after founder Carolyn Chipman Evans urged the City of Boerne to preserve marshland around Boerne City Park. CNC is maintained through a 501c3 non-profit organization called The Friends of the Cibolo Wilderness. Trails are open every day from 8 a.m. until 5 p.m. City Park is in a unique natural setting as it shares a border with Cibolo Creek.

San Antonio is only 15 minutes away and is home to attractions such as Fiesta Texas, Sea World, the Alamo, the River Walk, La Cantera, and the Rim.

All content from Kiddle encyclopedia articles (including the article images and facts) can be freely used under Attribution-ShareAlike license, unless stated otherwise. Cite this article:
Boerne, Texas Facts for Kids. Kiddle Encyclopedia.