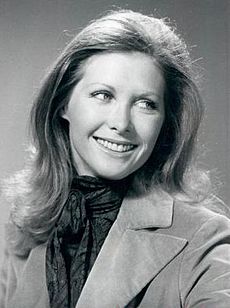 Jeri Lynn Mooney (born January 28, 1944), also known as Susan Howard, is an American actress and writer. She works in both movies and television series. She played Maggie in Petrocelli. She played Donna in Dallas from 1979 to 1987. In The Love Boat, she played Cynthia.

Mooney was born in Marshall, Texas.

All content from Kiddle encyclopedia articles (including the article images and facts) can be freely used under Attribution-ShareAlike license, unless stated otherwise. Cite this article:
Susan Howard Facts for Kids. Kiddle Encyclopedia.