Cave Without a Name facts for kids 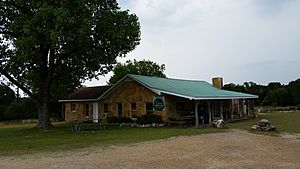 Cave Without A Name Gift Shop and former home 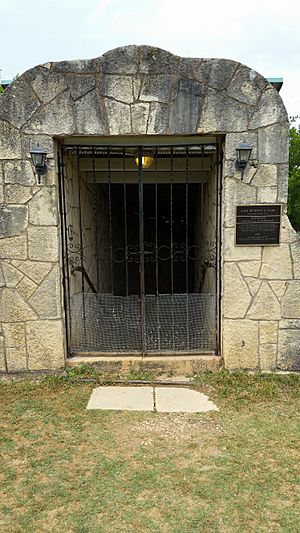 Cave Without A Name entrance with National Natural Landmark marker

The Cave Without a Name is a limestone solutional cave in the Texas Hill Country region of central Texas. It is a National Natural Landmark.

The cave is located 40 miles (64 km) from downtown San Antonio, and 10 miles northeast of Boerne off FM 474 and Kreutzberg Road. It has been commercially operated as a show cave and open for public tours since 1939. It is a member of the National Cave Association.

Although the cave has been open to the environment for many tens of thousands of years, as evidenced by numerous prehistoric animal finds discovered there, known human contact with the cave began only in the early 20th century, when a small farm animal became trapped in the small external opening of the cave, known as a sinkhole. The cave went largely unnoticed again until the 1920s during the era of Prohibition when a small moonshine distillery was installed in the uppermost cavern. It again fell into obscurity until three local farm children rediscovered the sinkhole in 1935. These children are believed to be the first who actually entered the main chambers of the cave.

After the rediscovery, Jim Horn, the original owner of the property decided to open it as a commercial venture. The show cave received its name after its official opening in 1939, as verified by a news paper article that hangs in the Cave's gift shop, in a state-wide contest held in 1940. A young boy suggested that the cave "was too beautiful to have a name", and so he received the 250 dollar cash prize awarded. The second owner of the Cave Without A Name, Eugene Ebell, renamed the cave "Century Caverns" in the late 1950s, but after several years of grief from the locals, Mr. Ebell changed the name back to Cave Without A Name.

Cave Without a Name was declared a National Natural Landmark by the National Park Service in February 2009.

Built in 1939, the stairwell into the cave has 126 steps descending to approximately 90 feet below the surface. The cave maintains a constant temperature of 66 degrees all year round. Within the cave there are two main areas. The main set of chambers open to the public make up the show cave, extending just over a quarter of a mile. This part of the cave consists of 6 large, well-lit rooms full of speleothems including stalactites, stalagmites, helictites, columns, and draperies. The second main area of the cave is an extensive set of caverns linked to the underground extension of the Guadalupe River. During a 1975 expedition of the Cave Without A Name, cavers mapped out over 2.7 miles of caverns, making it the 7th longest cave in Texas. The cave is currently being remapped by a team of researchers from Texas State University.

Due to the great natural acoustics created by 3 large solution domes on the ceiling of the large Queen's Throne room, the cave is host to 8-12 concerts each year, with attendances of up to 200 people. Some of the more common types of concerts consist of vocals, native American flute music, and Tibetan singing bowls. Some other unique features of the cave include the 50-foot-long (15 m) set of rimstone dams beneath the natural spring-fed pool, the 19-foot-long (5.8 m) draperies referred to by the cave's tour guides as "Texas-sized cave bacon", and a collection of stalagmites that resemble the nativity scene. In the winter months, the cave becomes home for between 5-10 dozen eastern pipistrelle bats. The seasonal inhabitants do not interfere with the tours as they only use the cave for hibernation. Another resident of the cave is a rare blind Texas salamander known as the Kendall County salamander that may only be found in the Cave Without A Name and another area cave, Cascade Caverns.

In addition to tours of the Cave Without A Name, as of 2010[update], guests to the 187 acre property have access to over a mile of hiking trails, a scavenger hunt, gem panning, geocaches, picnic tables, camp grounds, and a sculpture garden. Some activities are at an additional fee. The gift shop has a large selection of rocks, stones and fossils for sale, including numerous Amethyst cathedrals, jewelry, and more. There is also a large selection of geodes, both cut and uncut as well as a geode cutter onsite.

All content from Kiddle encyclopedia articles (including the article images and facts) can be freely used under Attribution-ShareAlike license, unless stated otherwise. Cite this article:
Cave Without a Name Facts for Kids. Kiddle Encyclopedia.