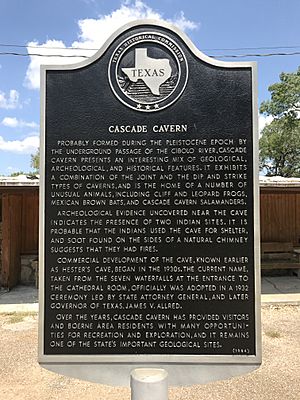 Cascade Caverns is a historically, geologically, and biologically important limestone solutional cave 3 mi (4.8 km) south of Boerne, Texas, United States, on 226 Cascade Caverns Road, in Kendall County. It has been commercially operated as a show cave and open for public tours since 1932. Informal tours were run as far back as 1875, when Dr. Benjamin Hester owned the cave property. The cave was known by the native Lipan Apache people who lived in the area prior to 1800.

Cascade Caverns is part of the Glen Rose Formation, a shallow marine to shoreline geological formation from the Lower Cretaceous period. This formation has been exposed in a large area beginning in South-central Texas, running north through the Texas Hill Country, ending up in North-central Texas.

The cave has been open to the environment for many tens of thousands of years, as evidenced by prehistoric animal finds and Lipan Apache artifacts from the 1700s. In the mid-19th century, various legends existed about a hermit who lived on the ledge at the entrance to the cave. In 1878, August Siemering, one of the co-founders of the San Antonio Express News, wrote the book Ein Verfehltes Leben (A Stolen Life, or A Wasted Life) about a hermit who lived in the cave. The book was later translated into English in 1932, The Hermit of the Cavern by May E. Francis, a University of Texas (t. u.) professor.

A cave in the area was also mentioned in the book The Boy Captives by Clinton L. Smith about two local boys who were abducted by Comanche and Lipan Indians on February 26, 1871. They spent several years living with the Indians until they were finally returned to their family. The cave may be Cascade Caverns or any of the other caves in the Cibolo Creek area.

The cave was first commercially opened in 1932 and operated until about 1941. Alfred and Edith Gray were the original land owners when the cave was first opened. The cave was closed during WWII because most of the men were away fighting in Europe and strict gas rationing limited travel. During the time of closure, the cave's artifact collection was looted from the gift shop. Business was resumed in the late 1940s. Cascade Caverns had been originally known as Hester's Cave, named after a late 19th-century landowner. It became most famous as a result of Frank Nicholson's publication of cave explorations.

Frank Nicholson (formerly of Carlsbad Caverns) was the first person in modern times to explore the cave all the way to the Cathedral Room. Several other people helped to explore the main cave along with other caves in the area, including Bernard Cartwright and his brother Dan. Bernard was married to Mary Rose (nee Kronkosky), who said that Edith Gray and she and their children would worry and wait for the cave explorers to come back out into the light of day.

The exploration in 1931 required getting past the Lake Room which was a sump. According to a newspaper article from November 1931 in the San Antonio Express News, they had some waterproof molasses buckets that they put their lights in. Also, a legend holds that they put flashlights in mason jars.

The cave tour business changed hands many times over the years. In the 1930s, a flag-stop on the San Antonio-Boerne SA&AP train line ran by the cave about 100 yards from the entrance. The current gift shop was originally a dance hall next to a kitchen. The Menger Hotel ran a restaurant near the cave entrance when the cave initially opened as a commercial endeavor in 1932. At one time, a toy train from Joske's department store ran around the grounds. The train still exists and is in storage, but is no longer used. At one time, a swimming pool, a movie theater, and a gravity house were nearby. 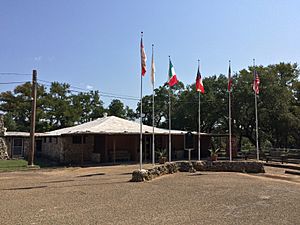 The original Cascade Caverns gift shop was built in the 1930s. It served as the gift shop for decades until 2002, when a catastrophic flood badly damaged the building.

In April 1984, a Texas historical marker was placed near the cave to commemorate the natural landmark. 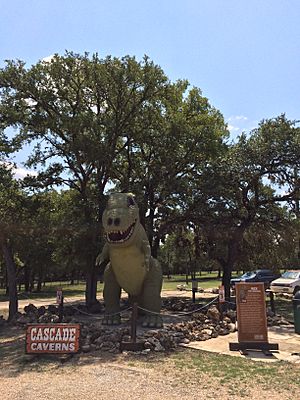 Rex was created as a movie prop for the 1993 movie Father Hood starring Patrick Swayze. The Disney Company filmed for several weeks inside the cave and on the grounds outside.

In 1993, the Walt Disney Company filmed a movie called Father Hood starring Patrick Swayze. They filmed for several weeks both inside the cave and out on the grounds. Several minutes of footage were used in the final version of the film. A prop in the film was a giant T. rex, which is still located near the gift shop today.

Cascade Caverns maintains a temperature range of 60–65 °F (16–18 °C) all year round. A 45- to 60-min commercial tour passes through a half mile of flowstone corridors and winding chambers, which leads 132 ft below the surface and into the Cathedral Room.

Below the Cathedral Room is another cave that is only accessible through a drain pipe that was installed in the early 1960s after the natural passage collapsed during a flood. Adventure Tours to the lower cave are given by expert cavers by reservation only. The sump at the bottom of the Lower Cave is about 230 ft below the surface.

The cave was host to Texas’ only cavern with a natural interior waterfall. Originally, seven waterfalls were in the cavern. A very bad drought in the 1950s caused all of the waterfalls to dry up, except for the one in the Cathedral Room. It would either not run or unexpectedly flood the room, so in the 1960s, the original source of the water was sealed up and an artificial waterfall was installed to mimic the original one without the danger of flooding. This very feature, the cascading waterfall, had earned the cave its name. The cave is 95% alive and water droplets persistently fall upon the cave formations. The primary formations found in the cave are soda straws. Most are quite short because of frequent flooding. 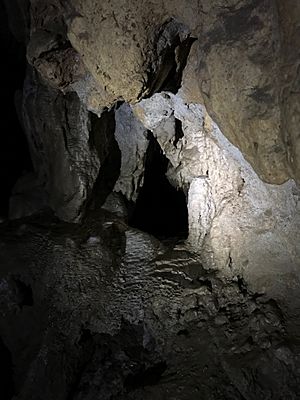 A hole in the cave, Pase de la Muerte, marked on the map in the gift shop as the Passage of Death

Mastodon remains, saber-toothed cat bones (Smilodon), American bison bones, and other animal parts have been found in the cave. Native American artifacts, human remains, and even a pistol were reportedly found during excavation of the front room. Most of these items disappeared during the closure in the early 1940s. 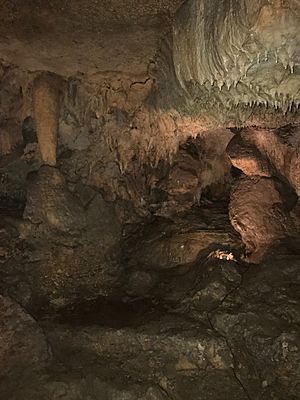 A beautiful little grotto between the Imagination Room and Storm Canyon 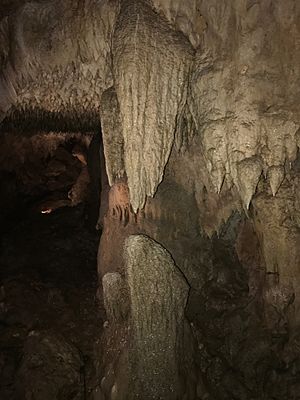 Tours are run year-round, with only rare closings due to flooding. A dam protects the cave from unexpected flash flooding. Quite a few floods have happened throughout the years that have affected the cave. Naturally, the cave formed with the help of flooding, with water helping to carve out the rock. During the exploration in 1931, white fish were reported to be in the cave. After the natural flow of water was inhibited with the dam, these fish are no longer seen.

All content from Kiddle encyclopedia articles (including the article images and facts) can be freely used under Attribution-ShareAlike license, unless stated otherwise. Cite this article:
Cascade Caverns Facts for Kids. Kiddle Encyclopedia.