Stalagmites may also refer to a type of fungus. 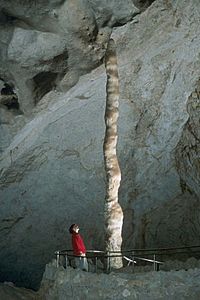 The Witch's Finger in the Carlsbad Caverns

A stalagmite is a form that can be found on the floor of a cave. It rises from the floor of a limestone cave when mineralized solutions drip from the ceiling and deposits of calcium carbonate form columns on the ground. The corresponding formation on the ceiling of a cave is known as a stalactite.

There are several methods to help remember which formation hangs from the ceiling (stalactite) and which rises from the floor (stalagmite):

When touring caves with stalactites and stalagmites you might be asked to not touch the rock formations. This is generally because the formation is considered to still be growing and forming. Since the rock buildup is formed by minerals solidifying out of the water solution, skin oils can disturb where the mineral water will cling. So the development of the rock formation will be affected and not will not be natural anymore.

Stalactites and stalagmites can also form on concrete ceilings and floors, but they form much more quickly on concrete than in the natural cave environment.

All content from Kiddle encyclopedia articles (including the article images and facts) can be freely used under Attribution-ShareAlike license, unless stated otherwise. Cite this article:
Stalagmite Facts for Kids. Kiddle Encyclopedia.