Mastodons are any species of extinct proboscideans in the genus Mammut (family Mammutidae), distantly related to elephants, that inhabited North and Central America during the late Miocene or late Pliocene up to their extinction at the end of the Pleistocene 10,000 to 11,000 years ago.

Mastodons lived in herds and were mainly forest-dwelling animals that fed on a mixed diet obtained by browsing and grazing with a seasonal preference for browsing, similar to living elephants.

The American mastodon, is the youngest and best-known species of the genus. They disappeared from North America as part of a mass extinction, widely believed to have been caused by overexploitation by Clovis hunters, and possibly also by climate change. 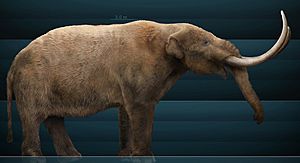 Restoration of an American mastodon

The first remnant of Mammut, a tooth some 2.2 kg (5 lb) in weight, was discovered in the village of Claverack, New York, in 1705. The mystery animal became known as the "incognitum". The first bones to be collected and studied scientifically were found in 1739 at Big Bone Lick State Park, Kentucky, by French soldiers, who carried them to the Mississippi River, from where they were transported to the National Museum of Natural History in Paris.

Some time later, similar teeth were found in South Carolina, which looked remarkably similar to those of African elephants. This was soon followed by discoveries of complete bones and tusks in Ohio; people started referring to the "incognitum" as a mammoth, like the ones that were being dug out in Siberia. 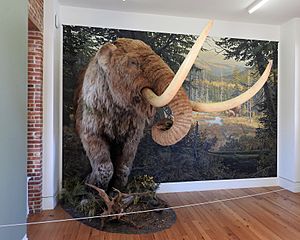 Anatomists (expert in anatomy), noted that the teeth of mammoth and elephants were different from those of the "incognitum", indicating that they were dealing with a distinct species. In 1806 the French anatomist Georges Cuvier named the incognitum "mastodon".

Over the years, several fossils from localities in North America, Africa and Asia have been attributed to Mammut, but only the North American remains have been named and described. A complete mtDNA sequence has been obtained from the tooth of a skeleton found in permafrost in northern Alaska. The remains are thought to be 50,000 to 130,000 years old. 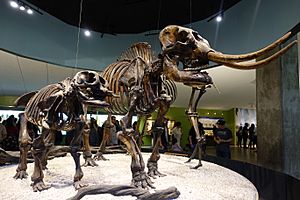 Female and calf American mastodon at the George Page Museum

Modern reconstructions based on partial and skeletal remains reveal that mastodons were very similar in appearance to elephants and, to a lesser degree, mammoths, though not closely related to either one. Compared to mammoths, mastodons had shorter legs, a longer body and were more heavily muscled, a build similar to that of the current Asian elephants. The average body size of the species was around 2.3 m (7 ft 7 in) in height at the shoulders, large males were up to 2.8 m (9 ft 2 in) in height.

Like modern elephants, the females were smaller than the males. They had a low and long skull with long curved tusks, with those of the males being more massive and more strongly curved. Mastodons had cusp-shaped (pointed, projecting, or elevated) teeth, very different from mammoth and elephant teeth. 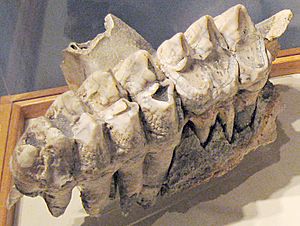 American mastodon molars at the State Museum of Pennsylvania

Based on the characteristics of mastodon bone sites, it can be concluded that the mastodon social group consisted of adult females and young, living in bonded groups called mixed herds. The males abandoned the mixed herds once reaching maturity and lived either alone or in male bond groupings.

Mastodons have been characterized as primarily browsing animals. Most accounts of stomach contents have identified coniferous (evergreen trees) twigs as the main food in their diet. Other accounts have reported selective feeding on low grounded vegetation, indicating a mixed browsing and grazing diet. Study of mastodon teeth wear patterns indicate that mastodons could adjust their diet according to the ecosystem, with regionally specific feeding patterns. 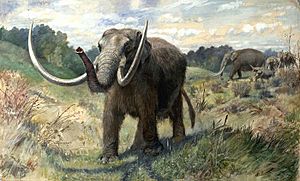 Painting of an American mastodon herd

The range of most species of Mammut is unknown as their occurrences are restricted to few localities, the exception being the American mastodon, which is one of the most widely distributed in North America. Fossil sites range in time, and in locations from as far north as Alaska, as far east as Florida, and as far south as the state of Puebla in central Mexico. A few isolated reports tell of mastodons being found along the east coast up to the New England region, with high concentrations in the Mid-Atlantic region. There is strong evidence indicating that the members of Mammut were forest dwelling, mainly in woodlands and forests, and browsed on trees and shrubs. They apparently did not move southward to South America, this could be because of a dietary specialization on a particular type of vegetation. 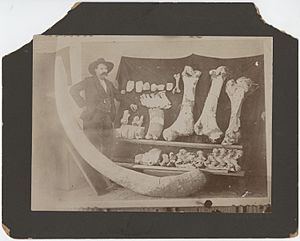 Fossil evidence indicates that mastodons probably disappeared from North America about 10,500 years ago as part of a mass extinction that is widely believed to have been a result of human hunting pressure. The latest Paleo-Indians entered the Americas and expanded to relatively large numbers 13,000 years ago, and their hunting may have caused the gradual reduction of the mastodon population.

All content from Kiddle encyclopedia articles (including the article images and facts) can be freely used under Attribution-ShareAlike license, unless stated otherwise. Cite this article:
Mastodon Facts for Kids. Kiddle Encyclopedia.