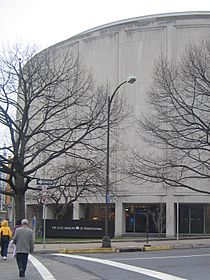 The museum includes a multi-media planetarium, as well as four floors of exhibits and displays covering Pennsylvania history from prehistoric times through current events. Visitation averages 315,000 people annually. Among the features are a large collection of artifacts and displays related to the American Civil War, as well as an extensive collection of industrial and technological innovations. Artwork, paintings, dioramas, and other audio-visuals (Blaine) aid in the interpretation. There are over three million objects in the museum's collections. The museum has many exhibits that showcase Pennsylvania history. The state museum divided there exhibits into three different categories; permanent, changing and online exhibits.

On March 28, 1905, Governor Samuel W. Pennypacker signed legislation creating The State Museum of Pennsylvania. The museums purpose during the time was to for the "preservation of objects illustrations the flora and fauna of the state and mineralogy, geology, archaeology, arts and history." The State Museum of Pennsylvania mission statement was influenced by the many other state museums that were already established such as New York, Illinois and Indiana. Later in the year 1905, Governor Pennypacker of Pennsylvania signed Act 481 which is what gave the State Museum their 20,000 start-up money for the museum. March 1, 1907, the museum staff and collection moved into the Executive Office Building. It became part of the Pennsylvania Historical and Museum Commission in 1945, and moved to its present building in 1964. It is located adjacent to the State Capitol Building. The building is round and the museum exhibits are located on the ground, first, second, and third floors, with offices of the museum staff and Pennsylvania Historical and Museum Commission on the fourth and fifth floors. The building was listed on the National Register of Historic Places in 2014.

All content from Kiddle encyclopedia articles (including the article images and facts) can be freely used under Attribution-ShareAlike license, unless stated otherwise. Cite this article:
State Museum of Pennsylvania Facts for Kids. Kiddle Encyclopedia.