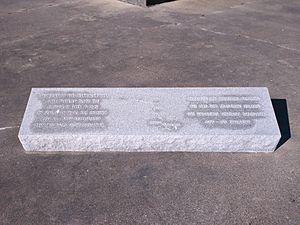 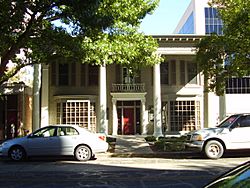 The Wahrenberger House in Austin served as a German-American school.

German Texan (German: Deutschtexaner) is both a term to describe immigrants who arrived in the Republic of Texas from Germany from the 1830s onward and an ethnic category that includes their descendants in today's state of Texas. The arriving Germans tended to cluster in ethnic enclaves; the majority settled in a broad, fragmented belt across the south-central part of the state, where many became farmers. As of 1990, about three million Texans considered themselves at least part German in ancestry, a subgroup of German Americans. 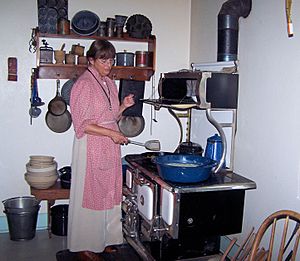 Emigration in force began during the period of the Republic of Texas (1836-1846) following the establishment of the Adelsverein (Verein zum Schutze deutscher Einwanderer, the Society for the Protection of German Immigrants in Texas) by a group of Germans dedicated to colonizing Texas in the 1800s.

A large portion of the early settlers following statehood were Forty-Eighters, emigres from the Revolutions of 1848 who dispersed into areas of Central Texas. After generations, German Texans spoke what became known as Texas German (German: Texasdeutsch), a German language dialect that was tied to the historic period of highest immigration. In Germany, the language developed differently than it did among the relatively isolated ethnic colony in the US.

After a period of ethnic activism during the 1850s, Civil War and Reconstruction, the Germans lived in relative obscurity as teachers, doctors, civil servants, politicians, musicians, farmers, and ranchers. They founded the towns of Bulverde, New Braunfels, Fredericksburg, Boerne, Walburg, and Comfort in Texas Hill Country, and Schulenburg and Weimar to the east.

German-American cultural institutions in Texas include the Sophienburg Museum in New Braunfels, the Pioneer Museum in Fredericksburg, the Witte-Schmid Haus Museum in Austin County, the German-Texan Heritage Society, and the Texas German Society.

All content from Kiddle encyclopedia articles (including the article images and facts) can be freely used under Attribution-ShareAlike license, unless stated otherwise. Cite this article:
German Texan Facts for Kids. Kiddle Encyclopedia.