New Braunfels ( BRAWN-felz) is a city in Comal and Guadalupe counties in the U.S. state of Texas known for its German Texan heritage. It is the seat of Comal County. The city covers 44.9 square miles (116 km2) and has a 2019 census-estimated population of 90,209. A suburb just north of San Antonio, and part of the Greater San Antonio metropolitan area, it was the third-fastest-growing city in the United States from 2010-2020.

The Adelsverein organized hundreds of people in Germany to settle in Texas. Immigrants from Germany began arriving at Galveston in July 1844. Most then traveled by ship to Indianola in December 1844, and began the overland journey to the Fisher-Miller land grant purchased by Prince Carl. At the urging of John Coffee Hays, who realized the settlers would not have time to build homes and plant crops further inland before winter, and as the German settlers were traveling inland along the Guadalupe River, they stopped near the Comal Springs. Prince Carl bought two leagues of land from Rafael Garza and Maria Antonio Veramendi Garza for $1,111.00.

The land was located northeast of San Antonio on El Camino Real de los Tejas and had the strong freshwater Comal Springs, known as Las Fontanas, when the Germans arrived. It was about halfway between Indianola and the lower portions of the Fisher-Miller land grant. The first settlers forded the Guadalupe River on Good Friday, March 21, 1845, near the present-day Faust Street bridge.

As the spring of 1845 progressed, the settlers built the "Zinkenburg", a fort named for Adelsverein civil engineer Nicolaus Zink, divided the land, and began building homes and planting crops. Prince Carl would also lay the cornerstone for the Sophienburg, a permanent fort and center for the immigrant association.

In 1844, Prince Carl was so disillusioned with the logistics of the colonization that he asked the Verein to remove him as commissioner-general and appoint a successor. When John O. Meusebach arrived, the finances were in disarray, due in part to Prince Carl's lack of business experience and his refusal to keep financial records. To a larger degree, the financial situation happened because the Adelsverein was an organization of noblemen with no practical backgrounds at running businesses. They were on the other side of the world and did not witness the situation with which both Prince Carl and Meusebach were dealing. Henry Francis Fisher had not supplied transport and supplies for which the Verein advanced money to him. Meusebach found Prince Carl in Galveston trying to return to Germany, detained by authorities for unpaid bills. Meusebach made good on the debts, so Prince Carl could depart.

Meusebach discovered that Prince Carl's choice of the inadequate Carlshafen (Indianola) as a port of entry, as well as the isolated route to New Braunfels, was deliberately chosen to keep the Germans from interacting with any Americans. According to Nicolaus Zink, Prince Carl had planned to establish a German feudal state by secretly bringing in immigrants and placing them in military fortresses. Meusebach, who had renounced his own title of nobility, took a different approach and invited Americans to settle in the Vereins territory. 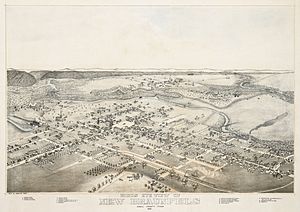 Prince Carl, being an officer of the Imperial Army of Austria, had kept a uniformed military unit at the ready in Indianola. Meusebach converted the military unit to a more needed work detail. A finance and business structure for the colony was put in place by Meusebach. He also provided for adequate food and shelter for the colonists. On August 11, 1845, Hermann Friedrich Seele became the first teacher for the German-English school in New Braunfels. Meusebach established friendly relations with a local tribe of Waco Indians. Upon seeing his reddish-blonde hair, they called him Ma-be-quo-si-to-mu, "Chief with the burning hair of the head".

In May 1846, Meusebach received a letter from Count Castell informing him 4,304 emigrants were on their way to Texas. With no funds and no new settlements, the mass of emigrants was stalled at Carlshafen. Meusebach's requests to the Verein for more money, and his warnings of pending bankruptcy for the Verein, brought no results. As a last resort, Meusebach instructed D.H. Klaener to publish the plight in the German news media. Embarrassed by the publicity, the Verein established a $60,000 letter of credit. The amount was not adequate for sustaining the total number of German emigrants in Texas, but Castell also sent Philip Cappes as special commissioner to observe the situation. Cappes had also been instructed by Castell to observe Meusebach and to secretly report back every detail. By the time Cappes departed in March 1847, he recommended another $200,000 be advanced.

Cappes invited Henry Francis Fisher to New Braunfels, in spite of Fisher not being entirely trustworthy to the Verein. As of February 11, 1845, Fisher had been involved in coercing newly arrived immigrants to sign documents stating their intent to depart from the Verein and align with Fisher's friend Dr. Friedrich Schubbert, also known as Friedrich Strubberg.

Cappes was not in town when Meusebach was breakfast host to Fisher on December 31, 1846. Posters had mysteriously appeared about town maligning Meusebach, saying "Curses upon Meusebach the slave driver", and inciting colonists to free themselves from his "tyranny". A group led by Rudolph Iwonski pushed their way into Meusebach's home, and colonist C. Herber brandished a whip. Herber was an alleged counterfeiter to whom Count Castell had awarded asylum. Meusebach and Herber shared a dislike of one another.

The colonists' list of demands included Meusebach resigning as commissioner-general and turning the colonization over to Fisher. Meusebach kept his composure, but the group became so heated, they yelled, "Hang him!" When the estimated 120 men dispersed, Fisher was nowhere to be found. The same evening, a different group of individuals assembled and pledged to stand by Meusebach, the next day passing resolutions condemning the actions of the mob. Meusebach himself had considered leaving Texas as early as November 1845, when he wrote to Count Castell and announced his intention to resign and return to Germany. Meusebach did not feel the Adelsverein was organized enough to achieve its goals. After the mob visit in New Braunfels, he again submitted his resignation to accompany a financial report to Castell on January 23, 1847.

Meusebach stabilized the community's finances, and encouraged the settlers to establish additional neighboring communities. The largest of these secondary settlements was Fredericksburg, 80 miles (130 km) to the northwest of New Braunfels.

New Braunfels thrived, and by 1850, it was the fourth-largest city in Texas, with 1,723 people, following only Galveston, San Antonio, and Houston in population. In 1852, the Zeitung newspaper was established, edited by German Texan botanist Ferdinand Lindheimer. The newspaper continues to publish under its current name, the Herald-Zeitung.

According to the United States Census Bureau, New Braunfels has a total area of 44.9 square miles (116.4 km2), of which 44.4 square miles (115.1 km2) is land and 0.5 square miles (1.3 km2), or 0.91%, is covered by water. The city is situated along the Balcones Fault, where the Texas Hill Country meets rolling prairie land. Along the fault in the city, a string of artesian springs known as Comal Springs gives rise to the Comal River, which is known as one of the shortest rivers in the world, as it winds 3 miles (5 km) through the city before meeting the Guadalupe River.

In New Braunfels, July and August tie for the average warmest months, with an average high of 95 °F (35 °C). May, June, and October have quite a bit of precipitation. The average annual precipitation has been 35.74 inches (908 mm).

For the year 2015, New Braunfels was named the U.S.'s second-fastest growing city with a population of 50,000 or more, according to estimates by the U.S. Census Bureau.

Gruene Historical District is located within the city limits of New Braunfels. Founded by the sons of settlers Ernst and Antoinette Gruene, the community had a bank, post office, school, general store, lumberyard, gristmill, dance hall, and cotton gin. It also had access to two railways for shipping cotton bales. Its most famous attribute was the dance hall, a family activity in those days. Due to the failure of the cotton crop from boll weevils, and the failure of the banks after 1929, commercial activity slowed to a crawl. This village is now a Nationally Registered Historic District where one can dine in the ruins of the original gristmill or enjoy live music at Gruene Hall. The community may also be researched through the Sophienburg Museum and Archives.

Companies based in New Braunfels include Rush Enterprises and Schlitterbahn.

According to New Braunfels' 2014 Comprehensive Annual Financial Report, the top employers in the area are: 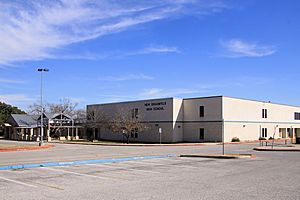 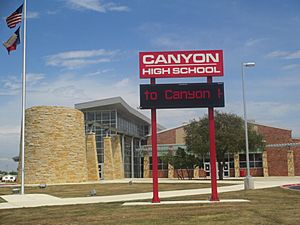 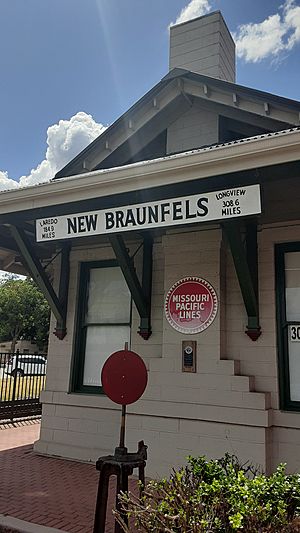 The town holds "Wurstfest", a German-style sausage festival, every November, drawing on the city's strong German heritage. Every December, the town celebrates Wassailfest in the historic downtown.

New Braunfels draws a large number of tourists, particularly in the summer because of the cold-spring rivers that run through the city. Many generations of families and college students return every summer to tube for miles down the Guadalupe and Comal rivers. New Braunfels is the site of the original water park, the Schlitterbahn WaterPark Resort. The Ernest Eikel Skate Park attracts many skate board enthusiasts.

New Braunfels also hosts a Buc-ee's gas station, which is recognized as the largest gas station in the world.

The newspaper Herald Zeitung was originally two newspapers: The Herald (published in English) and The Zeitung, which means "newspaper", (published in German) until 1967.

The other newspaper publisher serving the city of New Braunfels is the TX Citizen, formerly the NB citizen.

In radio, two stations broadcast from New Braunfels, KGNB 1420 AM and KNBT 92.1 FM, notable for its Americana music format.

All content from Kiddle encyclopedia articles (including the article images and facts) can be freely used under Attribution-ShareAlike license, unless stated otherwise. Cite this article:
New Braunfels, Texas Facts for Kids. Kiddle Encyclopedia.