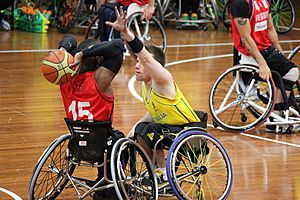 Wheelchair basketball is a type of basketball for people who use wheelchairs.

Types in wheelchair basketball plays an important undertakings in the sport as the order uses total points of players to come to a decision about who can be on the basketball court. The system of ordering for the sport are 1 point player, 2 point player, 3 point player, 4 point player and 4.5 point player. The higher the point number, the greater the player's able to use body power to play wheelchair basketball. With five players on the basketball count, the total number of points may not be greater than fourteen. There has been supported views put forward as to errors of the order system as being overly complex from players, coaches and leagues. These criticisms have been printed materials in theory but not doing research made public in 1986, 1990, 1995 and 1997.

At times, players may not easily go into into a type for a full point. For this reason, they can be put in order in between, such as 1.5 points, 2.5 points, and 3.5 points. Classifiers are said words tending to stop from giving to this half point order as a competitors first order. They are said to do on the second order.

Links to other sites

All content from Kiddle encyclopedia articles (including the article images and facts) can be freely used under Attribution-ShareAlike license, unless stated otherwise. Cite this article:
Wheelchair basketball Facts for Kids. Kiddle Encyclopedia.