San Marcos ( san MAR-kus) is a city in the U.S. state of Texas, within the Austin–Round Rock–San Marcos metropolitan area. The city is on the Interstate 35 corridor between Austin and San Antonio and is the seat of Hays County. The city limits extend into Caldwell and Guadalupe Counties, as well. Its population was 44,894 in 2010. In 2015 the U.S. Census Bureau estimated the population at 60,684

Founded on the banks of the San Marcos River, the area is thought to be among the oldest continuously inhabited sites in the Americas. San Marcos is home to Texas State University and the Meadows Center for Water and the Environment.

San Marcos is in Central Texas. It is 30 miles (48 km) southwest of Austin and 51 miles (82 km) northeast of San Antonio. According to the United States Census Bureau, in 2010, the city had a total area of 30.3 square miles (78.6 km2), of which 30.2 square miles (78.3 km2) was land and 0.1 square miles (0.3 km2), or 0.44%, was covered by water. Interstate 35 is the main highway through the city, with access from Exits 199 through 208. The city is situated on the Balcones Fault, the boundary between the Hill Country to the west and the Coastal Plains to the east. Along the fault, many springs emerge, such as San Marcos Springs, which forms Spring Lake and is the source of the San Marcos River. The eastern part of the city is blackland prairie. The western part consists of forested or grassy rolling hills, often marked with cacti.

The San Marcos River and the Blanco River, part of the Guadalupe watershed, flow through the city, along with Cottonwood Creek, Purgatory Creek, Sink Creek, and Willow Springs Creek.

The climate in this area is characterized by hot, humid summers and generally mild to cool winters, with some winter frost at night. Annual precipitation is about 34 inches (864 mm), almost all is rain (winter snow or ice is very rare). According to the Köppen climate classification system, San Marcos has a humid subtropical climate, Cfa on climate maps. 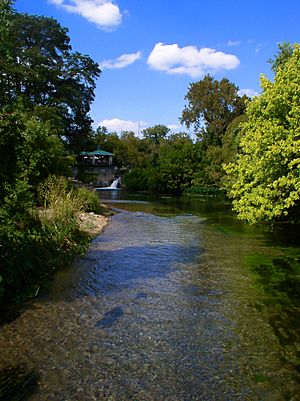 Downstream from the headwaters of the San Marcos Springs, Aquarena Springs, and Spring Lake

The San Marcos and Blanco Rivers flow through the city, along with Cottonwood Creek, Purgatory Creek, Sink Creek, and Willow Springs Creek. Each of these rivers and creeks has parks or nature preserves with hiking trails along it.

The San Marcos River rises from the San Marcos Springs. The springs are home to several threatened or endangered species, including the Texas blind salamander, fountain darter, San Marcos gambusia, and Texas wild rice. The river begins at San Marcos Springs, rising from the Edwards Aquifer into Spring Lake. The upper river flows through Texas State University and San Marcos and is a popular recreational area. It is joined by the Blanco River after four miles, passes through Luling and near Gonzales, and flows into the Guadalupe River after 75 miles (121 km). This course is the first leg of the Texas Water Safari. 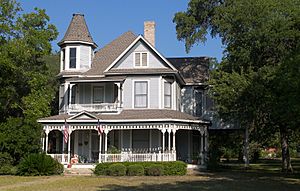 The Heard House, one of more than 40 historic properties in San Marcos

The river is a popular recreational area and is frequented by residents and tourists for tubing, canoeing, swimming, and fishing. The Texas Water Safari] starts in San Marcos on the first Saturday in June each year. Due in part to its natural beauty, the city was nicknamed "San Marvelous". The City of San Marcos references the nickname in its "Keep San Marcos Beautiful" campaign.

The town center (referred to locally as "the square") was laid out in 1851 and is listed in the National Register of Historic Places. The Hays County Courthouse, which sits in the center, was built in 1908. The downtown area surrounding the courthouse is home to many of the city's bars, restaurants, boutiques, and music venues, making it a top entertainment destination. The Marc, directly across the street from the courthouse, hosted the 2011, 2012, and 2013 Lone Star Music Awards.

The City of San Marcos and the San Marcos Arts Commission broke ground in January 2013 on a commemorative sculpture that will sit at the intersection of LBJ Drive and MLK Drive. Designed by Aaron P. Hussey, the sculpture depicts Johnson and King conversing in the Oval Office. The sculpture was officially unveiled on Martin Luther King, Jr. Day in 2014.

The downtown area has become home to several graffiti-style murals, including designs depicting Jeff Bridges' character The Dude from The Big Lebowski.

In 2016, the San Marcos Arts Commission announced a citywide art installation project that would erect 10 mermaid statues throughout the city. Mermaids have been part of San Marcos culture since the mid-1900s, when the former Aquarena Springs amusement park began underwater performances by women dressed as mermaids. Each mermaid statue will be 7 ft tall and mounted on a limestone slab to make the final height closer 9 ft. While the sculptures will be identical, each will be decorated by a different artist.

For more than 20 years, the San Marcos Performing Arts Commission and the San Marcos Parks and Recreation Department have hosted the Summer in the Park concert series with live music at an outdoor venue every Thursday night from June to August.

Many television shows and movies have filmed in San Marcos, including Friday Night Lights, Everybody Wants Some!!, Boyhood, American Crime, That's What I'm Talking About, Piranha, The Ringer, Courage Under Fire, The New Guy, The Faculty, Idiocracy, The Getaway, The War at Home, Little Boy Blue, Flesh and Bone, Race With the Devil, The Tree of Life, Tiramisu For Two, and Vikings.

Archeologists have found evidence at the San Marcos River associated with the Clovis culture, which suggests that the river has been the site of human habitation for more than 10,000 years. The San Marcos Springs are the third-largest collection of springs in Texas. Never in recorded history has the river run dry.

In January 1808, a small group of Mexican families settled at the Old Bastrop Highway crossing of the river, and named the settlement Villa de San Marcos de Neve. The settlers were plagued by floods and Indian raids, and the settlement was abandoned in 1812.

In November 1846, the first Anglos settled in the vicinity of the San Marcos Springs. The Texas Legislature organized Hays County on March 1, 1848, and designated San Marcos as the county seat. In 1851, a town center was laid out about a mile southwest of the headwaters of the river. The town became a center for ginning and milling local agricultural products. The town's most notable founder and early settler was Gen. Edward Burleson, a hero of the Texas Revolution and former vice president of the Republic of Texas. Burleson built a dam on the upper reaches of the river in 1849. The dam powered several mills, including one within present-day Sewell Park. 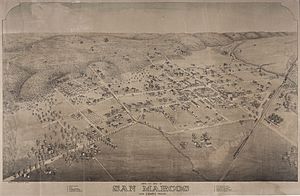 In the decade following the arrival of the International-Great Northern Railroad in 1881, cattle and cotton provided the basis for the growth of San Marcos as a center for commerce and transportation.

In 1866, the Coronal Institute was established as an early private high school. In 1899, Southwest Texas State Normal School (now known as Texas State University) was established as a teacher's college to meet demand for public school teachers in Texas. In 1907, the San Marcos Baptist Academy was established, furthering education as an important industry for the town. The demands of World War II forced the town's industry to diversify, and with the emergence of a manufacturing and light industrial sector, the town began to experience growth.

In the late 1940s, former Hollywood director Shadrack Graham produced a documentary about daily life in San Marcos as part of his “Our Home Town” series of films that encouraged commerce and civic activity in small communities. The film highlights several local businesses from the era, including Smith's Flowers, Waldrin's Cleaners, Lack's Furniture, and the Palace Movie Theater.

Gary Air Force Base, just east of town, was opened in 1942 as San Marcos Army Air Field, renamed San Marcos Air Force Base in 1947, and renamed finally in 1953 in honor of Lieutenant Arthur Edward Gary, killed at Clark Field in the Philippines on December 7, 1941, the first San Martian to die in World War II. During the war, the base trained over 10,000 navigators, and in the following years was the largest center of Air Force and Army helicopter training for pilots and mechanics in the United States, with 21 squadrons and 4800 personnel stationed there. The base was handed over to the Army in 1956, renamed Camp Gary, and was closed in 1963. Subsequently, part of the base was taken over by the city for use as San Marcos Airport, while another part was reopened in 1966 as the Gary Job Corps Center.

In the 1960s, with the establishment of Aquarena Springs The remarkable growth explosion of Austin further allowed San Marcos to prosper.

By 1973, San Marcos and Hays County were included by the U. S. Census Bureau in the Austin Metropolitan Statistical Area. By that year, the city's population had grown to 25,000 citizens, along with an additional Southwest Texas State University student body of 20,000.

All content from Kiddle encyclopedia articles (including the article images and facts) can be freely used under Attribution-ShareAlike license, unless stated otherwise. Cite this article:
San Marcos, Texas Facts for Kids. Kiddle Encyclopedia.