San Marcos (Spanish for "St. Mark") is a city in the North County region of San Diego County, California. As of the 2010 census, the city's population was 83,781. It is the site of California State University San Marcos. The city is bordered by Escondido to the east, Encinitas to the southwest, Carlsbad to the west, and Vista to the northwest. Lake San Marcos is an enclave, or county island, in the southwestern part of the city, within San Marcos' sphere of influence but technically an unincorporated community.

According to historical legends, the San Luis Rey Mission flocks were robbed by a small band of Native Americans in the late 18th century. Fleeing the Spanish troops, the Native Americans escaped to the hills. While pursuing the Native Americans, in 1797 the Spaniards came upon a fertile valley, which was named Los Vallecitos de San Marcos (Little Valleys of Saint Mark) to honor the day of discovery: April 25, St. Mark’s Day. On April 22, 1840, Governor Juan B. Alvarado granted Rancho Vallecitos de San Marcos to his relative, Jose María Alvarado. Jose Alvarado was killed at the Pauma Massacre in 1846, and the land was left to his wife; she then sold the land to Lorenzo Soto. In the late 1850s, Soto sold part of his land to Cave Couts, and his family was soon raising livestock. Although Cave Couts owned the land, Major Gustavus French Merriam from Topeka, Kansas, made the first permanent settlement. Merriam homesteaded 160 acres (0.65 km2) in the north Twin Oaks Valley and began wine and honey production.

After Major Merriam’s settlement, German and Dutch immigrants began moving into the area in the early 1880s. In 1883, a few miles south of the settlement, John H. Barham (for whom the present-day Barham Drive is named) founded the first town in the area, originally situated on the southeast corner of what are now Rancho Santa Fe Road and San Marcos Boulevard. By 1884, the town of Barham had a post office, blacksmith, feed store and weekly newspaper. In 1887, the San Marcos Land Company bought almost all of the San Marcos land formerly owned by the Couts family and promptly divided the land into tracts. Soon the beautiful hills began attracting home-seekers.

The original town of San Marcos was about a mile north of Barham, at the intersection of what is now Grand Avenue and Rancho Santa Fe Road. In 1887, the Santa Fe Railroad announced that it was going to lay tracks going through the valley, but to the disappointment of the citizens, the tracks were laid one mile (1.6 km) from the center of the town. By 1896, San Marcos was a community with its own stores, post office, blacksmith, and railroad depot. The first school in the area, which was started in Barham in 1886, had been moved to San Marcos three years later, as Barham was fading due to its distance from the railroad. To prevent San Marcos from suffering a similar fate, in 1903 the people of the town picked up their homes and moved a couple miles east along the railroad tracks to what now are Mission Road and Pico Avenue. By 1905, the town had every convenience, including rural mail delivery and telephone service. Later that same year, the Richland School (now a wedding chapel on Woodland Avenue) was built, becoming the second school in San Marcos. The main business in San Marcos in the 19th and early 20th centuries was farming. In the mid-20th century, dairies and poultry production became a big part of the business in the town.

San Marcos experienced a period of growth from 1956 onward, when the first water from the Colorado River arrived. Several small businesses were founded and the population rapidly increased to 2,500. San Marcos became an incorporated city on January 28, 1963. In the 1970s, San Marcos was flourishing as the third fastest-growing city in the state, and had a population of 17,479 by 1980. The population continued to boom over the next two decades, surpassing 30,000 in 1990 and nearing 85,000 by 2010. 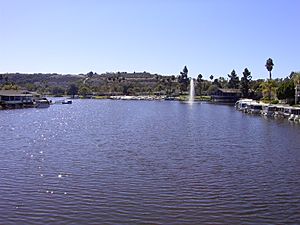 According to the United States Census Bureau, the city has a total area of 24.4 square miles (63 km2). 24.4 square miles (63 km2) of it is land and 0.02 square miles (0.052 km2) of it (0.08%) is water. Due to the moderating influence of the nearby Pacific, temperatures rarely fall below freezing in winter and above 90 degress F. in summer. Like most of coastal San Diego County, cool overcast from the Pacific is common in May and June ("May gray", "June gloom"). July through September are usually the warmest months, although hot and dry Santa Ana winds can strike any month (most common Autumn) and raise risks of wildfires. Most of the rain falls between November and March, averaging about 13 inches per year, with up to 20 inches falling in the San Marcos Hills. 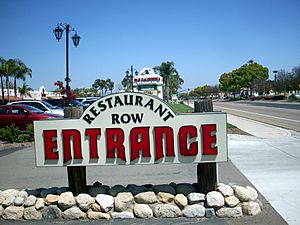 San Marcos is known for having some of the best restaurants in North County.

San Marcos has also become known for its abundance of open space and parks in recent years.

An illuminated cross, which stands on a hill above Lake San Marcos and is visible at night from many parts of the city, has been a community landmark for decades. Other landmarks include the Williams Barn (or "Red Barn"), a community center and reception hall built in 1952 to resemble a "big red barn." It is located in Walnut Grove Park in Twin Oaks, along with a collection of historic houses from around the city maintained by the San Marcos Historical Society.

According to the city's 2015 Comprehensive Annual Financial Report, the top employers in the city are:

High Tech High, Middle and Elementary are all charter schools located in San Marcos. High Tech High, which started with a single school in 2000, uses small-school settings, where students learn through projects, internships and interaction with professionals. It is located across the street from San Marcos High School on San Marcos Boulevard. 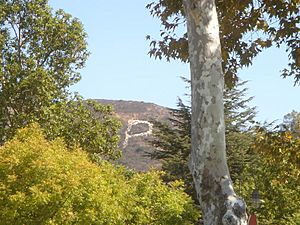 "P" on hillside above Palomar College

The main 200-acre (0.81 km2) campus of Palomar College is located in northern San Marcos. It is a public two-year community college and is a member of the California Community Colleges system. It enrolls approximately 30,000 full-time and part-time students. Palomar offers more than 250 associate degree and certificate programs, and residents of California are charged $46 per unit.

A giant letter P (for "Palomar") on the hillside above the campus is a ubiquitous landmark for San Marcos, visible miles away. 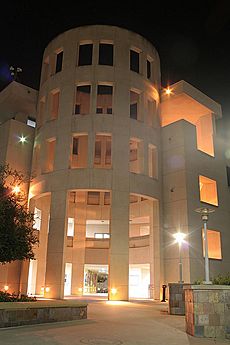 Cal State San Marcos is a campus in the California State University system. It was founded in 1989 and built on a 304-acre (1.23 km2) hillside in southeastern San Marcos. It enrolls about 14,000 students and offers 44 undergraduate programs, 10 graduate programs and 1 Doctorate in Education in three colleges and one nursing school.

All content from Kiddle encyclopedia articles (including the article images and facts) can be freely used under Attribution-ShareAlike license, unless stated otherwise. Cite this article:
San Marcos, California Facts for Kids. Kiddle Encyclopedia.