North County is a region in the northern area of San Diego County, California. It is the second-most populous region in the county (after San Diego), with an estimated population of 826,985. North County is well known for its affluence, especially in Oceanside, Encinitas, Carlsbad, Del Mar, Rancho Santa Fe, and Solana Beach, where house prices range, on average, above one million dollars.

Beach culture is very prominent in the area, and many of the region's beaches and lagoons are protected areas to help ensure the environment remains pristine.

The name dates to at least the 1970s, when many of the communities in the area were yet to become incorporated cities and local community decisions were made 40 miles away at the county seat. The North County section of San Diego County has historically been the most expensive region of San Diego, with such affluent neighborhoods as Cardiff-by-the-Sea, Carlsbad, Carmel Valley, Del Mar, Encinitas, Olivenhain, Rancho Santa Fe, and Solana Beach.

In modern times, North County continues to grow as a highly influential region of Greater San Diego. The top twenty-five employers in San Diego County are closer to the North County city of Carlsbad than San Diego proper.

North County is commonly divided into coastal and inland regions, with

Both coastal and inland North County contain two types of topography. In North County Coastal, the land is generally flat with low rolling hills. The beaches are sandy with occasional tidepools and rocky reefs. In some cases the coast is dominated by bluff type geography, where the land meeting the ocean sharply drops into the sea with a short beach. In some cases, such as in Encinitas, a whole city is bisected by a coastal foothill ridge. The foothills of mountains soon become visible as one travels further inland and encounters the rocky peaks of North County Inland. Such peaks include San Marcos Mountain, Palomar Mountain, Twin Peaks in Poway, Mount Woodson in Ramona, and Iron Mountain in unincorporated territory between the two cities. The coastal area also becomes more rugged to the north, where the Santa Margarita Mountains dominate the area within the Marine Corps Base Camp Pendleton.

Rivers and creeks that flow west from the mountains farther inland mostly end up draining into the region's four main lagoons. Throughout their course these rivers are interrupted by many lakes and reservoirs which support an array of native species.

Definitions vary, but almost always include the communities and cities along Interstate 5 north of Carmel Valley Road, and Interstate 15 north of Lake Hodges. For both geographic and political reasons, opinions differ as to whether to include the northern communities within the city limits of San Diego (such as La Jolla, Rancho Bernardo, or Scripps Ranch), or close-in communities and cities such as Solana Beach, Cardiff-by-the-Sea, Aviara, Del Mar, Carmel Valley, Rancho Santa Fe, 4S Ranch etc.

Spanning 125,000 acres (506 km2) in the northwestern corner of the county, Marine Corps Base Camp Pendleton forms a large buffer separating the coastal populated areas of North County from neighboring Orange County, preventing the creation of a coastal megalopolis stretching from Santa Monica to Imperial Beach

The region has strong ties to its coastline. Its has made notable efforts to preserve many marine environments, including lagoons and tidal wetlands, many of those being the final few on the South Coast. Unlike developments in many Orange County coastal cities, the lagoons and large areas of coast have not yet been so heavily developed. Major lagoons and inlets lining the coast from north to south include: Oceanside Harbor, Buena Vista Lagoon, Agua Hedionda Lagoon, Batiquitos Lagoon and San Elijo Lagoon.

The lagoons provide valuable wetland habitat for many birds, reptiles, fish, and plant species. The waters off the coast are also very rich in species diversity, supporting large kelp forests and rocky reefs.

North County contains forty golf courses, including Torrey Pines, which hosted the 2008 U.S. Open. North County is also known for its beaches, which stretch about thirty miles from Del Mar to San Onofre. These beaches experience a large tourist influx from June to November. Symbolic of North County's surf culture are the various statues proliferating the region including the Cardiff Kook in Cardiff-by-the-Sea. As surf culture is an integral part of North County, so is equestrian culture. Numerous equestrian centers, including the Del Mar Fairgrounds, Rancho Camino Equestrian Center, and San Diego Country Estates International Equestrian Center, are found in the region from Del Mar to San Diego Country Estates.

North County is home to Southern California’s only five-star and five-diamond restaurants: Addison at The Grand Del Mar, and El Bizcocho at Rancho Bernardo Inn.

The Del Mar Fair is home to one of the most famous racetracks in the world and is the site of the annual San Diego County Fair. Shopping malls include the North County Fair in Escondido and Plaza Camino Real in Carlsbad. The Cedros Design District in Solana Beach offers more than 85 shops, boutiques and galleries that specialize in antiques, handmade jewelry, unique artifacts, fine art, etc. Famous beaches include Moonlight Beach in Encinitas and the Oceanside Pier.

Locations in North County appear in popular television and films. Camp Pendleton is often featured in military-themed shows such as NCIS, and is the setting of the first season of Major Dad. The Del Mar Fair is also portrayed in shows such as Entourage. Veronica Mars is set in a fictional city north of San Diego; much of the show was filmed in Oceanside. Another crime drama, Animal Kingdom, is filmed and set in Oceanside. For two seasons the Showtime comedy Weeds was set in the fictional San Diego suburb of Ren Mar, which is implied to be in North County.

In North County, White-collar jobs outnumber blue-collar jobs at a ratio of 3:1. More people have Bachelor of Arts degrees than associate's degrees at a ratio of 2:1. More people are married than single by 2:1. Statistics compiled by the San Diego County Health and Human Services Agency reveal that coastal North County is 59% white, 18% Hispanic and 6% Asian, with blacks and people of other races less than 5%. Inland North County has roughly the same racial makeup, except that 9% are Asian. 19% of coastal North County residents make more than $100,000 per year, and 44% make less than $45,000, with the rest in the medium income range. Inland North County income stats are largely the same, except that only 42% make less an $45,000. 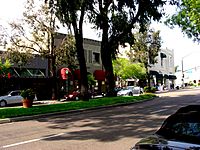 Populations listed are from the 2010 U.S. Census

Populations listed are from the 2010 U.S. Census

All content from Kiddle encyclopedia articles (including the article images and facts) can be freely used under Attribution-ShareAlike license, unless stated otherwise. Cite this article:
North County (San Diego area) Facts for Kids. Kiddle Encyclopedia.