The snowy plover (Charadrius nivosus) is a small wader in the plover bird family, typically about 5-7" in length. It breeds in Ecuador, Peru, Chile, the southern and western United States and the Caribbean. Long considered to be a subspecies of the Kentish plover, it is now known to be a distinct species.

Genetic research published in 2009 strongly suggested that the snowy plover is a separate species from the Kentish plover, and by July, 2011, the International Ornithological Congress (IOC), and the American Ornithologists' Union (AOU) North American committee have recognized them as separate species. Other taxonomic committees are reviewing the relationship.

Physically, snowy plovers are shorter-legged, paler and greyer above than their Old World sister species, and breeding males lack a rufous cap. The eye mask is also poorly developed or absent. 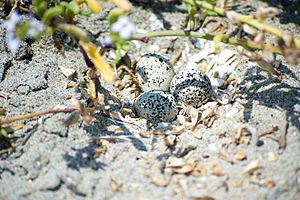 Three eggs in a nest on a beach in California, USA

The snowy plover breeds on sandy coasts and brackish inland lakes, and is uncommon on fresh water. It nests in a ground scrape and lays three to five eggs.

Breeding birds in warmer countries are largely sedentary, but northern and inland populations are migratory, wintering south to the tropics.

In North America, the snowy plover breeds from Texas and Oklahoma west to California and up the coastline to Oregon and Washington. The coastal form's primary breeding concentration is in central and southern California.

On March 5, 1993 the western snowy plover was listed as a threatened species under the Endangered Species Act of 1973. As of June 19, 2012, the habitat along the California, Oregon, and Washington Coasts have been listed as critical. In 2016, risk assessments by the IUCN listed the snowy plover as near threatened and found that the species had an overall decreasing population trend. In many parts of the world, it has become difficult for this species to breed on beaches because of disturbance from the activities of humans or their animals.

The University of California, Santa Barbara (UCSB) is currently endeavoring to rehabilitate snowy plover populations by protecting beaches along the central California coastline that runs along part of the university campus. UCSB has had some success in encouraging reproduction; the university also often trains students and other volunteers to watch over protected beaches during the daytime to ensure no one disturbs nesting grounds. But even with the conservation efforts their population is slowly dwindling, it's estimated that only about 2,500 western snowy plovers breed along the Pacific Coast.

The beaches lining Vandenberg Air Force Base on the Central coast of California are also home to several protected areas where breeding has been successful in recent years. Access to these beaches is limited to certain times of the year, and very specific areas are open to keep the bird protected. Most of these beaches are only open to military personnel and their families.

Coastal snowy plovers will hunt both close to the water's edge, as well as in drier, sandier areas. Inland birds favor damp, wetter environments. Food is typically obtained by a run-and-pause technique, though birds have been known to probe sand and chase insects near carcasses. The species primarily feeds on invertebrates, such as crustaceans, worms, beetles, and especially flies.

All content from Kiddle encyclopedia articles (including the article images and facts) can be freely used under Attribution-ShareAlike license, unless stated otherwise. Cite this article:
Snowy plover Facts for Kids. Kiddle Encyclopedia.