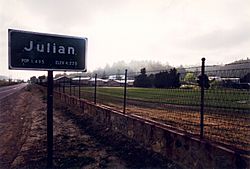 Julian is an official California Historical Landmark (No. 412). The Julian townsite and surrounding area is defined by the San Diego County Zoning Ordinance Section 5749 as the Julian Historic District. This designation requires that development adhere to certain guidelines that are administered by the Architectural Review Board of the Julian Historic District, which is appointed by the San Diego County Board of Supervisors.

The town is known for its apple pie and its annual Julian Apple Days Festival, which began in 1949.

The town was named by Drue Bailey after his cousin Mike Julian, who later was elected San Diego County Assessor.

The first European settlers were "Cockney Bill" Williams from England and John Wesley Horrell, who both arrived in the area in 1850 or 1851. After the American Civil War, in 1869, A.E. "Fred" Coleman, a former slave, was crossing over what is now known as Coleman Creek, just west of Julian. Seeing a glint of gold in the stream bed, he climbed down from his horse to investigate. Having had previous experience in the gold fields, he retrieved his frying pan and began panning the sands of the creek. Soon thereafter Coleman established the Coleman Mining District and was its recorder and also began the mining camp called Emily City later renamed Coleman City. Learning of the find, others rushed to the district and tried to trace the gold to its source. On February 22, 1870, the first "lode", or hard rock, mining claim was filed in the Julian area. Since February 22 was President George Washington's birthday, the mine was named the Washington mine. Soon hundreds of anxious men and families were rushing to Julian to stake their claims. Julian experienced a gold rush and became a tent city overnight. In April 1870, the area's first saw mill was set up and Julian began to take on a more permanent structure. Attempts to build rival mining towns at Coleman City, Branson City and Eastwood were defeated. Owners of the Cuyamaca rancho Land Grant claimed (the Cuyamaca Land Float) Julian and its mines were within the Rancho boundaries. In 1873, the courts ruled that the Rancho did not include Julian and the mines.

While the miners were trying to wrestle the gold from deep within the earth, James Madison brought a wagon load of young apple trees up into the mountains. The fruit trees flourished in the clear, fresh air. Apples are still a big product in Julian, many of which are used for making the world-famous Julian apple pies.

According to a bronze historical plaque appearing in the town, in the early days of Julian, the majority of San Diego County's African-American population resided in or near the town, including the founders of the Robinson Hotel as well as a noted resident, America Newton. Of the 55 blacks living in San Diego County during the 1880 census, 33 lived in the Julian area. (Although this information appears on the plaque, it has been the subject of some controversy.)

In recent decades Julian has become a quaint mountain resort. The town narrowly escaped destruction in the 2003 Cedar Fire that burned much of the surrounding area.

According to the United States Census Bureau, the CDP has a total area of 7.8 square miles (20 km2), all land.

Soils in and around Julian are mostly dark brown, slightly to moderately acidic sandy loams which are well drained and of variable stoniness. Less stony areas, which underlie most of the townsite, are in the Holland series. The hills around town have rocky soils of the Crouch series. Somewhat poorly drained alluvial loam occurs along Coleman Creek.

Julian experiences more extreme temperatures and greater precipitation than much of southern California. It also receives snow in winter, which accumulates the most in March and can occur as late as April or even May. This attracts people from San Diego and other coastal cities, where it does not snow. Average yearly snowfall from 1893 to 2012 has been 22 inches (560 mm).

There were 658 households, out of which 31.9% had children under the age of 18 living with them, 56.2% were married couples living together, 10.2% had a female householder with no husband present, and 30.2% were non-families. 24.3% of all households were made up of individuals, and 7.6% had someone living alone who was 65 years of age or older. The average household size was 2.46 and the average family size was 2.93.

The main employment sectors in Julian are tourism and agriculture, with emphasis on apples.

The Julian Union School District operates one elementary, one junior high, one high school, and one Julian Charter School. 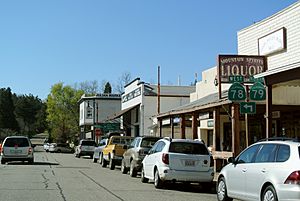 California State Route 78 and 79 in Julian

All content from Kiddle encyclopedia articles (including the article images and facts) can be freely used under Attribution-ShareAlike license, unless stated otherwise. Cite this article:
Julian, California Facts for Kids. Kiddle Encyclopedia.