The Mexican wolf (Canis lupus baileyi), also known as the lobo, is a subspecies of gray wolf once native to southeastern Arizona, southern New Mexico, western Texas and northern Mexico. It is the smallest of North America's gray wolves, and is similar to C. l. nubilus, though it is distinguished by its smaller, narrower skull and its darker pelt, which is yellowish-gray and heavily clouded with black over the back and tail. Its ancestors were likely the first gray wolves to enter North America after the extinction of the Beringian wolf, as indicated by its southern range and basal physical and genetic characteristics.

Early accounts of the distribution of the Mexican wolf included southeastern Arizona, southwestern New Mexico, sometimes western Texas, USA and the Sierra Madre Occidental, Mexico. This past distribution is supported by ecological, morphological, and physiographic data. The areas described coincide with the distribution of the Madrean pine-oak woodlands, a habitat which supports Coues’ white-tailed deer (Odocoileus virginianus couesi) that is the Mexican wolf's main prey. In 2017, there are at least 143 Mexican wolves living wild in Mexico, Arizona, and New Mexico. There are 240 in captive breeding programs in the USA and Mexico. 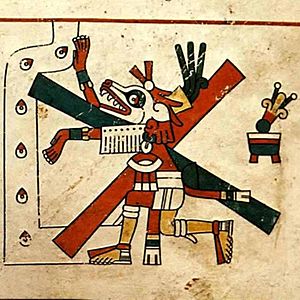 The Aztec god Xolotl, depicted here in the 15th century Codex Fejervary-Mayer, may have been based on the Mexican wolf rather than a dog as once believed.

The Mexican wolf was held in high regard in Pre-Columbian Mexico, where it was considered a symbol of war and the Sun. In the city of Teotihuacan, it was common practice to crossbreed Mexican wolves with dogs to produce temperamental, but loyal, animal guardians. Wolves were also sacrificed in religious rituals, which involved quartering the animals and keeping their heads as attire for priests and warriors. The remaining body parts were deposited in underground funerary chambers with a westerly orientation, which symbolized rebirth, the Sun, the underworld and the canid god Xolotl. The earliest written record of the Mexican wolf comes from Francisco Javier Clavijero's Historia de México in 1780, where it is referred to as Cuetzlachcojotl, and is described as being of the same species as the coyote, but with a more wolf-like pelt and a thicker neck.

There was a rapid reduction of Mexican wolf populations in the Southwestern United States from 1915-1920; by the mid-1920s, livestock losses to Mexican wolves became rare in areas where the costs once ranged in the millions of dollars. Vernon Bailey, writing in the early 1930s, noted that the highest Mexican wolf densities occurred in the open grazing areas of the Gila National Forest, and that wolves were completely absent in the lower Sonora. He estimated that there were 103 Mexican wolves in New Mexico in 1917, though the number had been reduced to 45 a year later. By 1927, it had apparently become extinct in New Mexico. Sporadic encounters with wolves entering Texas, New Mexico and Arizona via Mexico continued through to the 1950s, until they too were driven away through traps, poison and guns. The last wild wolves to be killed in Texas were a male shot on December 5, 1970 on Cathedral Mountain Ranch and another caught in a trap on the Joe Neal Brown Ranch on December 28. Wolves were still being reported in small numbers in Arizona in the early 1970s, while accounts of the last wolf to be killed in New Mexico are difficult to evaluate, as all the purported "last wolves" could not be confirmed as genuine wolves rather than other canid species.

The Mexican wolf persisted longer in Mexico, as human settlement, ranching and predator removal came later than in the Southwestern United States. Wolf numbers began to rapidly decline during the 1930s-1940s, when Mexican ranchers began adopting the same wolf-control methods as their American counterparts, relying heavily on the indiscriminate usage of 1080.

All content from Kiddle encyclopedia articles (including the article images and facts) can be freely used under Attribution-ShareAlike license, unless stated otherwise. Cite this article:
Mexican Wolf Facts for Kids. Kiddle Encyclopedia.