The Zuni are federally recognized Native American Pueblo peoples. Most live in the Pueblo of Zuni on the Zuni River, a tributary of the Little Colorado River, in western New Mexico, United States. Zuni is 55 km (34 mi) south of Gallup, New Mexico. In addition to the reservation, the tribe owns trust lands in Catron County, New Mexico and Apache County, Arizona. They called their homeland Shiwinnaqin.

Distribution of the Zuni language. 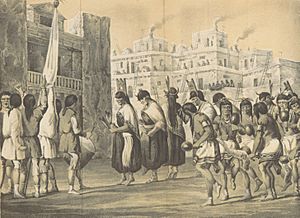 Image of Zuni Pueblo created during the U.S. Army Corps of Topographical Engineers's 1851 expedition to Arizona which was led by Captain Sitgreaves.

Archaeology suggests that the Zuni have been farmers in their present location for 3,000 to 4,000 years. It is now thought that the Zuni people have inhabited the Zuni River valley since the last millennium B.C., at which time they began using irrigation techniques which allowed for farming maize on at least household sized plots. More recently, Zuni culture seems related to both the Mogollon and Ancestral Pueblo peoples cultures, who lived in the deserts of New Mexico, Arizona, Utah, and southern Colorado for over two millennia. The "village of the great kiva" near the contemporary Zuni Pueblo was built in the 11th century CE. The Zuni region, however, was probably only sparsely populated by small agricultural settlements until the 12th century when the population and the size of the settlements began to increase. In the 14th century, the Zuni inhabited a dozen pueblos between 180 and 1,400 rooms in size. All of these pueblos, except Zuni, were abandoned by 1400, and over the next 200 years, nine large new pueblos were constructed. These were the "seven cities of Cibola" sought by early Spanish explorers. By 1650, there were only six Zuni villages.

In 1539, Moorish slave Estevanico led an advance party of Fray Marcos de Niza's Spanish expedition. The Zuni killed him as a spy. This was Spain's first contact with any of the Pueblo peoples. Francisco Vásquez de Coronado traveled through Zuni Pueblo. The Spaniards built a mission at Hawikuh in 1629. The Zunis tried to expel the missionaries in 1632, but the Spanish built another mission in Halona in 1643.

Before the Pueblo Revolt of 1680, the Zuni lived in six different villages. After the revolt, until 1692, they took refuge in a defensible position atop Dowa Yalanne, a steep mesa 5 km (3.1 miles) southeast of the present Pueblo of Zuni; Dowa means "corn", and yalanne means "mountain". After the establishment of peace and the return of the Spanish, the Zuni relocated to their present location, only briefly returning to the mesa top in 1703. 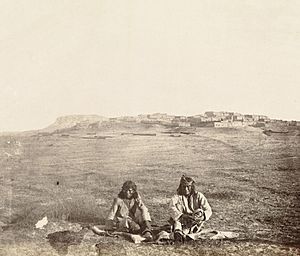 Zuni men and the ancient Pueblo Town of Zuni, ca.1868

The Zunis were self-sufficient during the mid-19th century, but faced raiding by the Apaches, Navajos, and Plains Indians. Their reservation was officially recognized by the United States federal government in 1877. Gradually the Zuni farmed less and turned to sheep and cattle herding as a means of economic development.

Frank Hamilton Cushing, an anthropologist associated with the Smithsonian Institution, lived with the Zuni from 1879 to 1884. He was one of the first participant observers and an ethnologist to wrongfully document and exploit the Zuni way of life He is well known amongst the Zuni's for exposing sacred photos and ceremonies that shouldn't be shared with the world.

A controversy during the early 2000s was associated with Zuni opposition to the development of a coal mine near the Zuni Salt Lake, a site considered sacred by the Zuni and under Zuni control. The mine would have extracted water from the aquifer below the lake and would also have involved construction between the lake and the Zuni. The plan died in 2003 after several lawsuits. 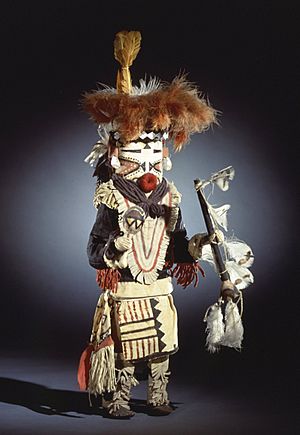 The Zuni traditionally speak the Zuni language, a language isolate that has no known relationship to any other Native American language. Linguists believe that the Zuni have maintained the integrity of their language for at least 7,000 years. The Zuni have, however, share a number of words from Keresan, Hopi, and Pima pertaining to religion and religious observances. The Zuni continue to practice their traditional religion with its regular ceremonies and dances, and an independent and unique belief system.

The Zuni were and are a traditional people who live by irrigated agriculture and raising livestock. Their success as a desert agri-economy is due to careful management and conservation of resources, as well as a complex system of community support. Many contemporary Zuni also rely on the sale of traditional arts and crafts. Some Zuni still live in the old-style Pueblos, while others live in modern houses. Their location is relatively isolated, but they welcome respectful tourists.

The Zuni Tribal Fair and rodeo is held the third weekend in August. The Zuni also participate in the Gallup Inter-Tribal Ceremonial, usually held in early or mid-August. The A:shiwi A:wan Museum and Heritage Center is a tribal museum that showcases Zuni history, culture, and arts.

The Zuni utilize many local plants in their culture. For an extensive list, see main article Zuni ethnobotany. 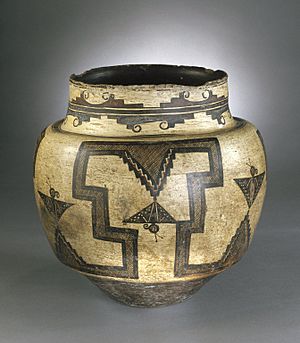 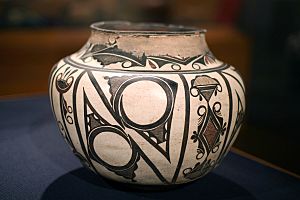 Traditionally, Zuni women made pottery for food and water storage. They used symbols of their clans for designs. Clay for the pottery is sourced locally. Prior to its extraction, the women give thanks to the Earth Mother (Awidelin Tsitda) according to ritual. The clay is ground, and then sifted and mixed with water. After the clay is rolled into a coil and shaped into a vessel or other design, it will be scraped smooth with a scraper. A thin layer of finer clay, called slip, is applied to the surface for extra smoothness and color. The vessel is polished with a stone after it dries. It is painted with home-made organic dyes, using a traditional yucca brush. The intended function of the pottery dictates its shape and images painted on its surface. To fire the pottery, the Zuni used animal dung in traditional kilns. Today Zuni potters might use electric kilns. While the firing of the pottery was usually a community enterprise, silence or communication in low voices was considered essential in order to maintain the original "voice" of the "being" of the clay, and the purpose of the end product. Sales of pottery and traditional arts provide a major source of income for many Zuni people today. An artisan may be the sole financial support for her immediate family as well as others. Many women make pottery, clothing, and baskets.

Zuni also make fetishes and necklaces for the purpose of rituals and trade, and more recently for sale to collectors.

The Zuni are known for their fine silversmithing, Zuni jewelers set turquoise in silver. Today jewelry making thrives as an art form among the Zuni. Many Zuni have become master silversmiths and perfected the skill of stone inlay. They found that by using small pieces of stone, they were able to create intricate designs and unique patterns.

Small oval-shaped stones with pointed ends are set in silver, close to one another and side by side. The technique is normally used with turquoise, sometimes with coral and occasionally with onyx, in creating necklaces, cuffs, earrings and rings. The fine setting technique is known as "needle point" and even finer, as "petit point". 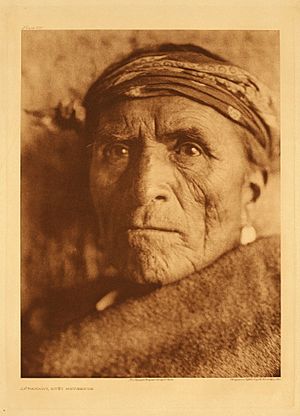 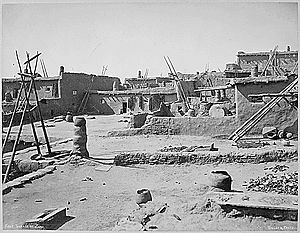 Religion is central to Zuni life. Their religious beliefs are centered on the three most powerful of their deities: Earth Mother, Sun Father, and Moonlight-Giving Mother, as well as Old Lady Salt and White Shell Woman, as well as other katsinas.

Religion is central to Zuni life. Their traditional religious beliefs are centered on the three most powerful of their deities: Earth Mother, Sun Father, and Moonlight-Giving Mother. The Zunis' religion is katsina-based, and ceremonies occur during winter solstice, summer, harvest, and again in winter.

The Zuni Priesthood includes three priests (north, above and below), and Pekwin (above priest) determines the religious calendar. A religious society is associated with each of the six kivas, and each Zuni male child is initiated into one of these societies. 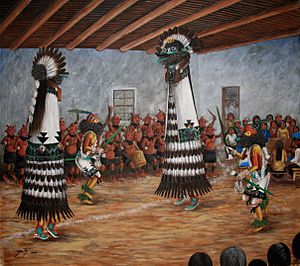 Shalako is a series of ceremonial dances that take place throughout the night on or around the winter solstice. They are closed to non-native individuals unless there is a personal invitation by a tribal member. The ceremony also blesses the houses that were built during the year. The blessing takes the form of singing that accompanies six dancers who are dressed in Shalako outfits. These outfits can be as high as eight feet; the dancers wearing them represent "couriers of the rain deities come to bless new homes". The dancers move from house to house throughout the night; at dawn Saiyatasha performs a final prayer and the ceremony is complete.

All content from Kiddle encyclopedia articles (including the article images and facts) can be freely used under Attribution-ShareAlike license, unless stated otherwise. Cite this article:
Zuni Facts for Kids. Kiddle Encyclopedia.