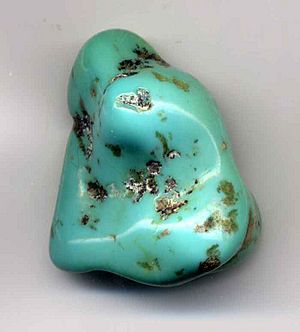 Turquoise is an opaque (cannot be seen through), blueish-green mineral. It is not common and can be valuable in finer grades. It has been prized as a gem and ornamental stone for thousands of years because of its interesting coloring.

All content from Kiddle encyclopedia articles (including the article images and facts) can be freely used under Attribution-ShareAlike license, unless stated otherwise. Cite this article:
Turquoise Facts for Kids. Kiddle Encyclopedia.