Khorasan was a province in north eastern Iran, but historically referred to a much larger area comprising the east and north-east of the Persian Empire. The name Khorāsān is Persian and means "where the sun arrives from." The name was first given to the eastern province of Persia during the Sasanian Empire and was used from the late middle ages.

The province roughly encompassed the western half of the historical Greater Khorasan. The modern boundaries of the Iranian province of Khorasan were formally defined in the late nineteenth century and the province was divided into three separate administrative divisions in 2004:

Khorasan is famous worldwide for its saffron and zereshk (European barberry), which are produced in the southern cities of the province. It is also known for its famous rugs. Khorasan is the birthplace of Ferdowsi, the famous Iranian poet who wrote the Shahnameh (Shāhnāme), the national epic of Persian people and of the Iranian World. 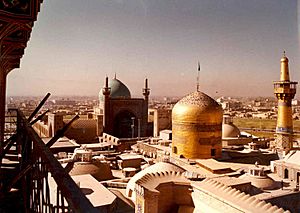 The Imam Reza shrine in Mashhad, Iran is a complex which contains the mausoleum of Imam Reza, the eighth Imam of Twelver Shiites. It is the largest mosque in the world by area. Also contained within the complex are the Goharshad Mosque, a museum, a library, four seminaries, a cemetery, the Razavi University of Islamic Sciences, a dining hall for pilgrims, vast prayer halls, and other buildings.

The complex is one of the tourism centers in Iran and has 12 million Iranian and non-Iranian Shias visiting the shrine each year.

All content from Kiddle encyclopedia articles (including the article images and facts) can be freely used under Attribution-ShareAlike license, unless stated otherwise. Cite this article:
Khorasan Province Facts for Kids. Kiddle Encyclopedia.